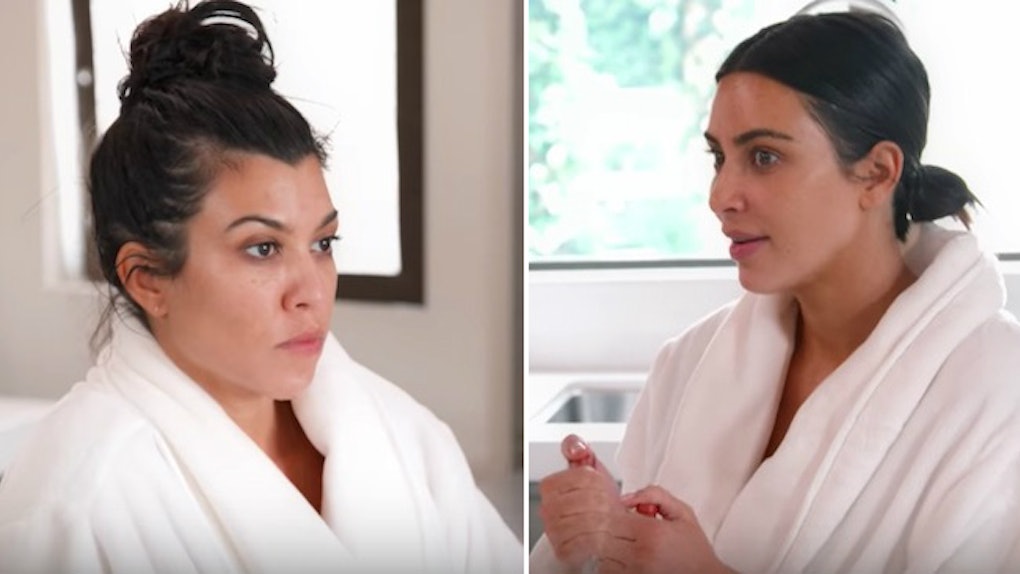 Is A Gluten Free Diet Better For You? Kim & Kourtney Kardashian Don't Agree On It

Ah, sisters. If you’ve got them, you understand these ladies were put on Earth as built-in best friends, confidants, and your toughest critics. Trust me, I speak from experience when I say sisters aren’t afraid to call you out on poor outfit choices, the fact that you need to move on from your a-hole ex-boyfriend, and question that BS diet you’ve been following. Take the Kardashians, for example. The latest sister spat has Kourtney and Kim battling the long-debated subject of whether or not a gluten-free diet is better for you, and even though their decision to take a sweat test to settle the score was probably more for entertainment value than anything else, it’s actually a really valid question.

Just in case you missed the latest episode of Keeping Up With the Kardashians, or you just simply, you know, don’t keep up with the Kardashians, here’s a quick recap: Basically, Kourtney’s feeling a tad high and mighty because she’s been gluten-free for a decent amount of time now, and claims she’s felt real benefits from eliminating grains from her diet. This is all well and good, and, hey, more power to the eldest Kardashian sister for committing and sticking to this way of eating, but she’s become a bit preachy about the whole thing as of late, and Kim’s not having it.

To determine whether or not going gluten-free is actually more beneficial to your health, Kim suggested they take a sweat test. Now, it’s debatable whether sweat tests are actually a legitimate method to determine how healthy you are. Even Kourtney expressed a hint of doubt when she told the camera, “I’ve never heard of a sweat test, and it sounds gross.” But, she does admit we all go to some interesting lengths to find out more information about our health, so she was more than willing to hop into the sauna, collect some sweat, and prove Kim wrong. Unfortunately, the answer still remains a mystery, because both sisters, and their friend Jonathan Cheban, ducked out of the heated room after only a few minutes. Womp.

There are actual health benefits to following a gluten-free diet, so Kourtney is onto something, kind of.

Even if you don’t necessarily have a gluten allergy, choosing foods that don’t contain grains definitely has its advantages. Gluten is, essentially, a protein in grains that makes things like bread chewy. The problem is, it is 100 percent indigestible, which means when it’s consumed, it kind of slides down your intestines whole, and can potentially cause inflammation in people who struggle with celiac disease and other digestive disorders.

Gluten is often the root cause of belly bloat (aka food babies), gas pains, and diarrhea. Sounds kind of like a PeptoBismol commercial, right? It’s not a fun time. By eliminating these types of foods from your diet, these symptoms should subside.

On top of that, according to Dr. Josh Axe, D.N.M., C.N.S., D.C., founder of DrAxe.com, author of Eat Dirt, and co-founder of Ancient Nutrition, cutting gluten out of your diet entirely can also improve your energy levels. Foods containing gluten are often so dense, that it requires the body to spend a lot of time and energy to break them down, causing you to feel sluggish during the digestion process. The less gluten-heavy foods you consume, the more energy your body has to do other things.

Unless you have a gluten sensitivity, though, there’s really no reason to cut it out of your diet completely.

I’ll admit, I don’t follow the Kardashians all that closely (I’m #TeamKendall myself), so I wasn't really sure why Kim was so bothered by Kourtney’s gluten-free lifestyle (I still don’t really think it’s anyone’s business what someone chooses to eat or not to eat, but I digress). To find out, I did a quick search on why the eldest Kardashian decided to drop gluten in the first place.

So here’s the scoop: Kourtney explained her reasonings for her dietary swap in a blog post on her app, stating that while she always "felt fine" eating dairy and gluten, she and her children were tested and showed signs of corn, gluten, and dairy sensitivity. While she doesn't believe everyone needs to follow this sort of lifestyle, she feels going gluten-free has improved her quality of life.

Seriously, kudos to Kourt if she genuinely feels a difference in her body now that she's eliminated gluten and dairy from her family's menu. But it's really important that I point out if you don't have a sensitivity/allergy, switching to gluten-free foods isn't necessarily a "better" way to eat.

There are some risks in choosing to go gluten-free when you don't necessarily have to. Derrick Woodward, M.D. told Mayo Clinic that cutting out certain kinds of foods that contain gluten can also mean cutting out vitamins and nutrients like iron, calcium, and fiber, so it's really important to make sure you're getting these essentials from other healthy sources (such as beans, veggies, and fruit).

The moral of the story here is this: Eat the foods that make you feel your best.

I'm not here to settle the score between Kim and Kourtney; I'm simply trying to shed some light on what feels like a decades-long debate. While it definitely seems like there may be more benefits to going gluten-free if you actually have a sensitivity or allergy, what you choose to eat or not eat is entirely your business.

Talk to your doctor to figure out whether gluten is the reason you're suddenly hit with a case of the runs, or experiencing horrible bloating after indulging in a bowl of pasta. If gluten doesn't bother you, eat that sh*t up. If it does, try to find alternatives that don't upset your stomach. It's all about finding what makes you feel good personally, and sticking with it no matter what anyone else has to say about it.