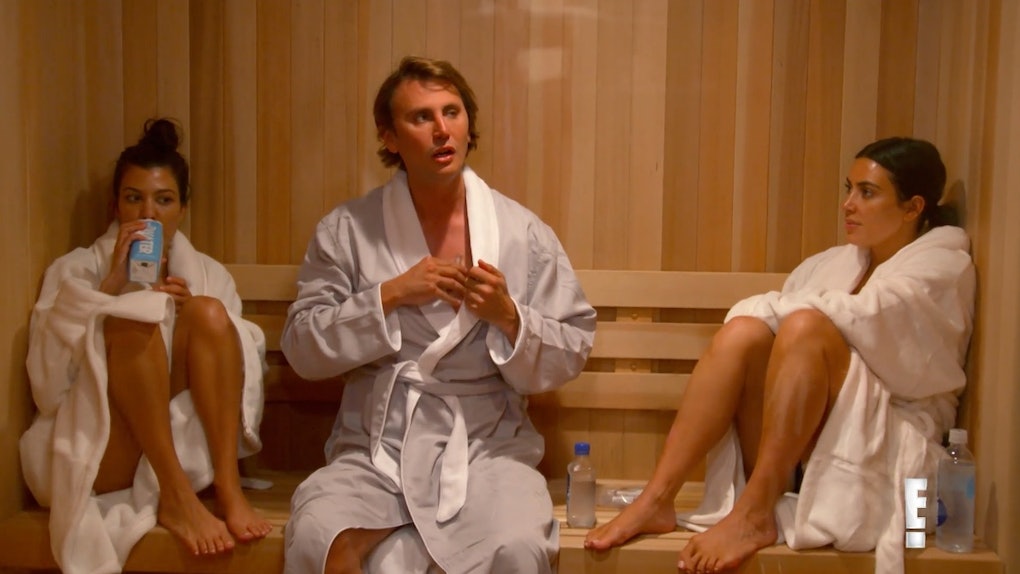 What Your Sweat Can Tell You About Your Health, Since The Kardashians Are Curious

You may be a certified yogi, a workout fiend, or you just might sweat a lot (hi, me too), but do you actually know what your sweat can tell you about your health? The Kardashians do — or at least, they tried to figure it out in the most recent episode of Keeping Up With The Kardashians. Kim, Kourtney, and their faithful sidekick Jonathan Cheban took a "sweat test" to find out who of the three is the "healthiest," and aside from being a little gross, I have to admit it was pretty interesting.

Now, there's a reason why I put the phrase "sweat test" in quotes; using such a measure to determine one's health status is a debatable practice, to say the least. Luckily, Kourtney echoed this skepticism in the episode, at least a little: "I've never heard of a sweat test and it sounds gross, but we do some pretty crazy things to get the information we need, especially when it comes to beauty and health."

A sweat test is traditionally used as a litmus test for a specific diagnosis rather than an all-around judgment of your health.

Doctors use sweat tests to check for cystic fibrosis, for example, which is a progressive, genetic disease that causes lung infections and other organ infections due to the buildup of thick mucus in the system. People who are diagnosed with cystic fibrosis have higher levels of chloride in their sweat, which is why it's a reliable test for the disease.

However, beyond testing for cystic fibrosis, using sweat as a measure for general health isn't exactly a common practice among medical professionals — not yet, anyway.

In recent years, more work has been done to create patches and monitors that do monitor your health via particles in your sweat. One such invention in the works is a sweat patch called a "biosensor" that will read droplets of sweat, process that information, and then beam it over to your smartphone for you to read. Those measurements, as of now, include health analyses like hydration and electrolyte levels so that athletes can know when to replenish and refuel during workouts. Biosensors are not yet available to the general public, so you'll have to wait on your own personal patch.

There may also be plans to use sweat as a means for further and faster relays of information about a person's health, but that doesn't mean our sweat can give us a fully comprehensive breakdown of how healthy we are.

In 2018, a blood test is a far more extensive way to assess your health than any sort of sweat test.

Blood tests can reveal your "true age" (aka how old your organs look, compared to what your chronological age is), your risk of developing Alzheimer's, your happiness levels, your hydration levels, your anxiety levels, and more. It's a far more in-depth way for you to stay educated on the state of your well-being, beyond whether or not you need to drink more water.

The Kardashians come to this conclusion as well, opting for a blood test after trying out a sweat test, to which I say bravo! The best thing you can do for your health is to stay conscious and informed about what your best options actually are, and until the science catches up with us (and is distributed to the masses, not just the Kardashians), a blood test is a way better option to learn more about your health than a sweat test.

But if you need a reason to spend some time in the sauna next weekend, you can always say you're giving yourself a personalized sweat test. Your secret's safe with me.