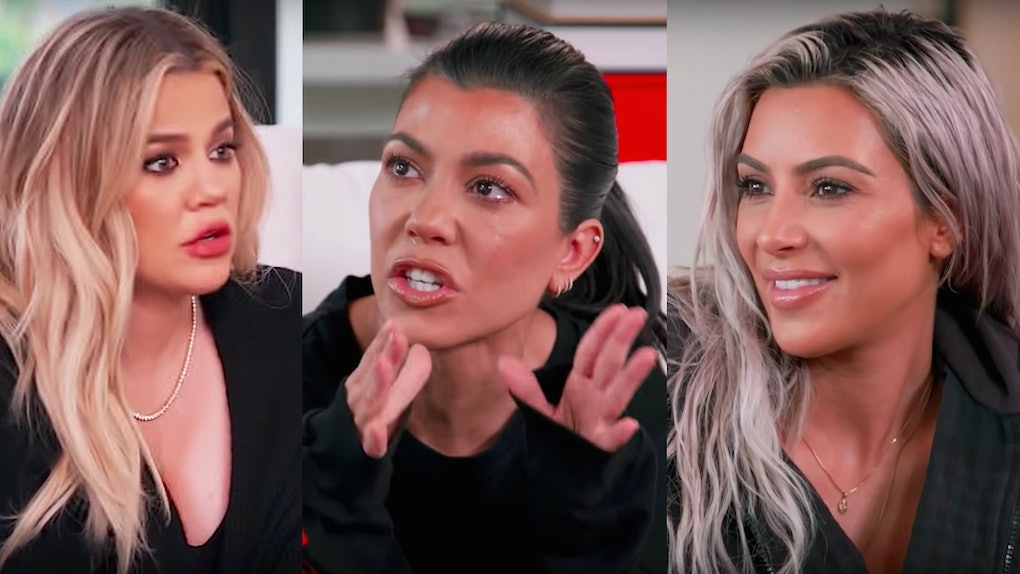 Kim, Khloé, and Kourtney Kardashian's fight has been the main plotline so far on the new season of Keeping Up With The Kardashians. Kim and Kourtney got into what was probably their most intense fight on the show to date during the season premiere, and now we're seeing the fallout of all of that. This video of Kim, Kourtney, and Khloé Kardashian going to family therapy on the latest episode of Keeping Up With The Kardashians shows that the family is trying to take healthy steps toward reconciliation, but it more than strongly hints that Kourtney is going through something that she's not telling the rest of the family.

The idea to go to therapy was Kim and Khloé's. They sat Kourtney down during the episode to ask her if she would be open to going to a session with them so they can hash out their issues with a mediator. Well, actually, it kind of seems like this was forced on Kourtney... but that's neither here nor there, I guess, considering she went and actively participated. OK, moving on! Kim said to a reluctant Kourtney in a clip from the episode, "We're all going to therapy together... because we all need to communicate with a mediator and we don't have that mediator."

Kourtney really wasn't into the idea. "I really don't think we need to go to therapy, to be honest, to solve our problems." Then she apparently had enough of the conversation and started doing something on her phone instead. Khloé tried talking to her and saying, "In therapy are you on your phone, or do you give your therapist attention?" And Kourtney literally just grunts in response, so I'm going to take that as an, "I didn't hear you and don't care to hide that fact," reaction from Kourt.

Finally, they end up in the therapy session.

The clip starts off with Kourtney saying, "I think, generally, we just need to learn how to communicate better. I'm the one who invented mean fighting, and you know, just saying the meanest things possible. But I'm just not wanting to fight like that anymore."

"But you surround yourself with people that seem to be the opposite, in my opinion," Kim said back.

The session really seemed to be more about Kim and Khloé trying to pry the truth of whatever Kourtney's going throughout of her and not actually geared toward communicating better. Sure, they were more respectful and careful with their words thanks to the presence of the therapist, but Kim and Khloé saying things like, "she's always anxious and insecure" and "it's also an insecurity I've never seen from her before," sound more like a script setting up some big reveal rather than actual concern.

Kourtney broke down in tears at one point about the show not being her top priority. "Everything to you guys, the show is more important, work is more important," she said. "We all have different priorities and working, it’s not my top priority. It’s never going to be." In last week's episode of KUWTK, Kourtney said she was "ashamed" of her "disgusting" family and said if she could quit the show, quit all jobs, and just be a full-time mom, she would, so what she said in therapy tracks.

Kim said in a separate solo shot after the therapy session,

I definitely think Kourtney's going through something, but she can’t commit to filming a season and sharing her life if she’s not going to at all. We just want her to be held accountable and be responsible—that when you take a job and are getting paid to do something, you honor that. Because all of us do.

Whatever Kourtney's going through, it's just so much deeper than me and Khloé, and until Kourtney's ready to talk about it, I think we can't push her or try to be aggressive. And for me, that's where it's really frustrating. She's going through a lot of life changes right now, and we just have to let her go through that.

It sounds like the show is strongly hinting that some kind of big reveal involving Kourtney's personal life is coming later in the season, so we'll just have to wait and see what happens.