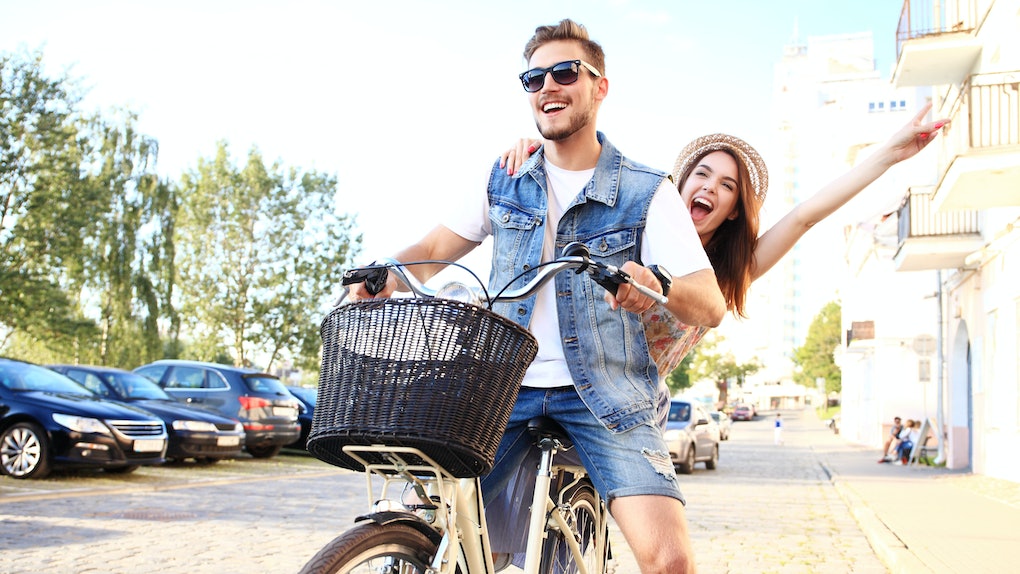 Sometimes, when two people come together, their strengths blend and balance out in such a beautiful way that it seems they're basically capable of anything (looking at you, Bey and Jay). If that sound like the type of relationship you're looking for, then it's high time to consider the best Enneagram relationship pairings. Because some combos just seem to crush it, both in their personal and professional lives.

The Enneagram model consists of nine distinct personality types, each of which as their own way of relating to others and the world around them. Unlike other personality assessments, like the Myers-Briggs type indicator, the Enneagram is not focused on a person's outer behavior, but rather their inner motivations that drive their behavior. So, it makes sense why it could be a useful tool for finding your soulmate. The beauty of discovering your Enneagram type is that it helps to build your self-awareness — and the more self-aware you are, the more likely you are to find a compatible partner.

Let's be clear: There is no perfect Enneagram combination when it comes to dating. Every relationship requires work. That said, there are some types that just seem to bring out the absolute best in each other. I'll put it this way: if you find yourself in one of the following pairings, you're on your way to #powercouple status for sure.

According to one study of 457 married couples, this is one of the most common combinations — and it makes sense, too. While these types may seem super different on the surface, they're both driven to make a positive impact on the world around them.

The thing to know about Twos is that they're people-pleasers to the core, and as a result, they can sometimes end up getting taken advantage of. They may be prone to saying "yes" to things they don't want to do at work or putting off an important discussion with their boss just to avoid any awkwardness. Eights don't let them get away with that. Their willful, passionate and sometimes downright confrontational nature can rub off on the Two, and they can help them to build the confidence they need to vocalize their needs and get ahead in the world. Meanwhile, the goal-oriented Eight can definitely depend on the nurturing Two (nicknamed "The Helper" for good reason) for support in all of their ambitions and endeavors.

The bottom line? The Eight helps the Two harness their inner power, while the Two helps the Eight to drop their guard while also serving as their biggest cheerleader.

You know how they say opposites attract? Yeah, this is one of those situations. Hear me out here. It's true, the One is a total perfectionist and the Seven is a carefree, fun-loving space cadet — and while that may sound like a recipe for disaster, their differences are precisely why they work so well.

The adventurous Seven can help the self-controlled One to get out of their comfort zone, which is key to realizing their full potential. They also encourage them to lighten up once in a while, and to not be so hard on themselves. On the other side, the dedicated, purposeful One can show the Seven how to focus their energy on one project at a time — enabling them to find a much-needed sense of direction in life and ultimately, achieve their dreams.

Basically, the One and Seven have a lot to learn from each other, as long as they're open to it.

Considering that Threes are known as The Achievers, it's no surprise that these types tend to be super successful. Here's the thing, though: They can also be incredibly image-conscious, meaning they worry a little too much about what other people think. Fortunately, Nines are great at helping them to care a little less. Not only do they provide a ton of encouragement and support as the Threes work toward achieving all of their sky-high goals, but they also remind them to take a breather now and then so their well-being doesn't get compromised by their ambition. In turn, Threes are great at motivating Nines to invest time and energy into their own personal growth.

BTW, one thing these types have in common is that they're super optimistic, and the fact that they're both able to maintain a positive attitude and find a silver lining means that as a team, they can essentially overcome anything. They're also both super social creatures. Let a Three-Nine couple loose at a networking event and you can bet they'll be working the room like total pros.

This may seem like an unlikely pairing. After all, Fours are known for being ultra-romantic, whimsical, and emotionally-driven — whereas Fives are more analytical and intellectually-driven. However, both types tend to reject convention and are naturally innovative AF, meaning that when they put their heads together, they can come up with all kinds of amazing ideas.

In this powerhouse pairing, Fives bring the curiosity and Fours bring the creativity. It's like this: the Four creates the magic, while the Five asks all the important questions to fine-tune it. Also, neither of these types is afraid to go deep — in fact, they'd much prefer to take their time exploring all facets of something rather than just skimming the surface. While they may have differing interests, they both approach everything they do with intensity and can appreciate each other's unique talents and skills.

What makes this pairing so special is their shared love of all things weird. Neither one is put off by the other's eccentricities and idiosyncrasies. And by giving each other permission to be totally authentic they can find beauty and power in their own quirks and follow their passions with total freedom.