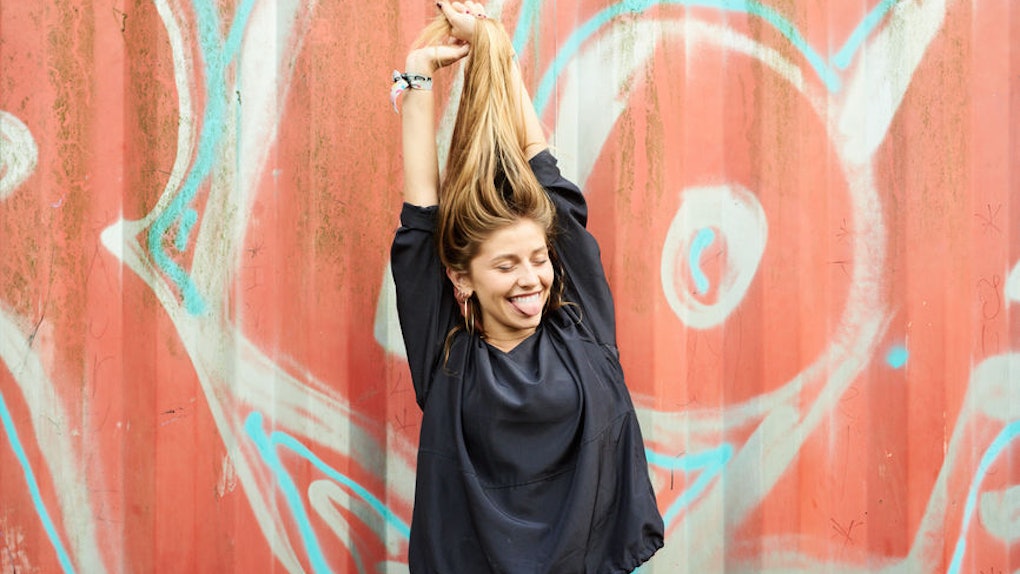 Is Optimism Good For Your Health? Positive Thinking Benefits You In 3 Big Ways, Science Says

I recently went through a collection of journals I’d kept over the years, and to say the material I’d penned as a teen was entertaining would be an understatement. But when I read different entries aloud to my mom, “entertaining” wasn’t exactly the word she used to describe them. “Have you ever realized you always fixate on the negative?” she asked me, and I paused. Do I? “Even now, you always focus on every little negative thing that happens to you, even if it’s a good day,” she continued. Knowing optimism can be good for your health, and negative thinking can, well, fudge up a few things, I took it upon myself to revisit these diaries again, and I even asked my husband if he’d noticed this consistently negative behavior in my personality as well. The consensus was unanimous: I am a Negative Nancy, and according to a new paper published in the Journal of the American College of Cardiology (JACC), I better turn my frown upside down because, if I don’t, my overall well-being could suffer as a result.

Look, I’m sure by now you’ve heard a whole lot more than you might care to about the powers of positive thinking and that, if you consciously make the effort to shift a negative mindset to a positive one, it can make all the difference in your world. It might sound like a bunch of hocus-pocus when you’re in the thick of a rotten day, but science is now claiming that positive thinking can improve your health both physically, as well as mentally. So maybe the next time coffee leaks all over your white blouse, you forget to turn in a homework assignment, or wake up on the wrong side of the bed, instead of honing in on those bad vibes, you might want to try your best to grin, bear it, and, in a sense, fake it until you feel it.

I know myself, and when I give in to salty moods, all I want to do is sulk and roll around in a negative puddle like a piglet in a pile of mud. It’s in this particular state of mind that I’m likely to forgo my fitness routine, indulge in all the comfort food, and, like a domino effect, allow one thing that’s stressing me out to cause a whole bunch of other things to also give me anxiety. But don’t leave me out to dry here; you know damn well there have been times in your life where one thing went wrong, then another, and another, and another. The truth is, negativity spreads like the plague, and the more you feel it emotionally, the more likely you’ll start to feel its physical effects, too.

“Adopting positive changes in your outlook on life and choosing to be optimistic can result in tangible improvements in your heart health,” says Robert Glatter, M.D., an assistant professor of emergency medicine at Lenox Hill Hospital, Northwell Health (who was not involved in the JACC research). Thinking happy thoughts on the reg, according to both Glatter and the results of this new research, can, over time, translate to more tangible benefits like a healthier diet, a regular workout routine, and even better sleep, which will then lead to regulated blood pressure and cholesterol, Glatter explains. “All of these behaviors are linked to improved mental health as well,” he tells Elite Daily, “leading to less anxiety and depression over the long-term.”

In the JACC review, researchers analyzed several past studies on the effects of positive thinking and found that an optimistic outlook can often lead a person to be more inclined to follow a healthy diet plan, exercise regularly, and consciously work to keep their stress levels low. In other words, your psychological well-being plays a huge role in how you feel physically. Here are the three major ways optimism affects your physical health, as well as a few tips for how you can feel your best in both your mind and your body.

I know myself, and when I'm in a bad mood, my first order of business when I come home is to make a pit stop at the fridge. Sitting in front of the TV with a pint of Ben & Jerry's or Chinese take-out containers might sound basic AF, but to me, it's all the comfort I need. Of course, there's nothing wrong with a bowl of ice cream here, an order of crab rangoon there, but these aren't exactly the healthiest options for your body.

According to ScienceDaily, the JACC research showed that optimistic people generally sustain healthier diets "by consuming more fruits and vegetables, and less processed meats and sweets." And this is the kind of thing that works both ways: If you eat a healthy diet, you'll feel better physically, which will, in turn, make you feel better mentally.

But, if you still struggle to make that conscious decision when the going gets rough and your pantry shelves are teasing you with boxes of Pop-Tarts and ramen noodles, I can totally relate. One solution, according to Clarissa Silva, a behavioral scientist, relationship coach, and creator of the Your Happiness Hypothesis Method, is to think before you snack, and consider how eating a certain food will make you feel mentally, as well as physically. In other words, of course a sleeve of Oreos is going to taste amazing, but ultimately, you might feel really sluggish and gross after the fact. And it's not about not having the Oreos at all, but rather, as Silva explains, finding a balance by treating yourself to a few cookies, and maybe some other, more nutritious snacks, too. The point, regardless of what you actually eat, is to have the goal of maintaining a positive outlook in everything you do.

"By examining your own logic and making it a daily practice to use positive thinking, it rewrites your chemistry and your ability to create happiness as your emotional default mode," Silva tells Elite Daily. "The best ways to enhance these levels are by making it a practice to consciously focus on positive outcomes."

Positive Thinking Will Inspire You To Get Back Into Exercise

While I personally love to snack on any and all junk food I can find when I'm in a negative funk, you know what I don't do (but probably should)? Work out.

Listen, your body needs its fair share of rest days, don't get me wrong. But the second a good mood becomes a crummy mood, your motivation to get up and get active is bound to plummet. The next thing you know, it's 12 a.m., and the most exercise you've gotten all day was walking from the couch to the refrigerator and back.

Personally, if I'm just not feeling a workout, I won't push myself, and you shouldn't, either. However, Darwin Labarthe, MD, MPH, PhD, lead author of the JACC research and a professor of preventive medicine at Northwestern University Feinberg School of Medicine, said in a statement that optimistic outlooks, per his team's findings, are indeed "associated with regular physical activity."

With that in mind, maybe, on a bad day, you skip high-intensity circuits or lifting heavy, but Glatter says something like yoga or tai chi would be low-key and really beneficial to both your physical and mental health. "Daily mediation, yoga, and tai chi have been shown to lower blood pressure and reduce the physical symptoms of anxiety, also leading to reduction in depressive symptoms as well," he tells Elite Daily. "Practicing and engaging in mindfulness is one of the most effective ways to improve your health ."

When You Smile More, You Stress Less

And last, but not least: just keep smiling. I know this is one of those things that's much easier said than done, but according to the JACC review authors, using problem-solving and planning for the worst possible scenario ahead of time really can reduce stress in the long run. But, if you're not much of a planner, or things just have a way of happening outside of your control, doctor of psychology and licensed clinical social worker, Dr. Danielle Forshee, LLC, says staying cool, calm, and collected might be as easy as imagining the outcome you'd like.

"Research suggests that positive thinking in the form of fantasies about the future relates to decreased symptoms of depression and overall positive well-being," Forshee tells Elite Daily over email. The key, she explains, is to imagine yourself engaging in a positive behavior, rather than giving into the fact that things aren't exactly going your way at the moment.

So, for example, let's say you aren't able to make it to the gym tonight like you'd planned. Instead of focusing on the obstacles preventing you from achieving your goal, imagine yourself exercising more often, and figure out realistic ways you can make this happen, like taking the stairs over the elevator. "This small thing will create optimism for your future habits rather than make you feel bad about them," Forshee says, "providing a better opportunity for you to achieve what you would like to."