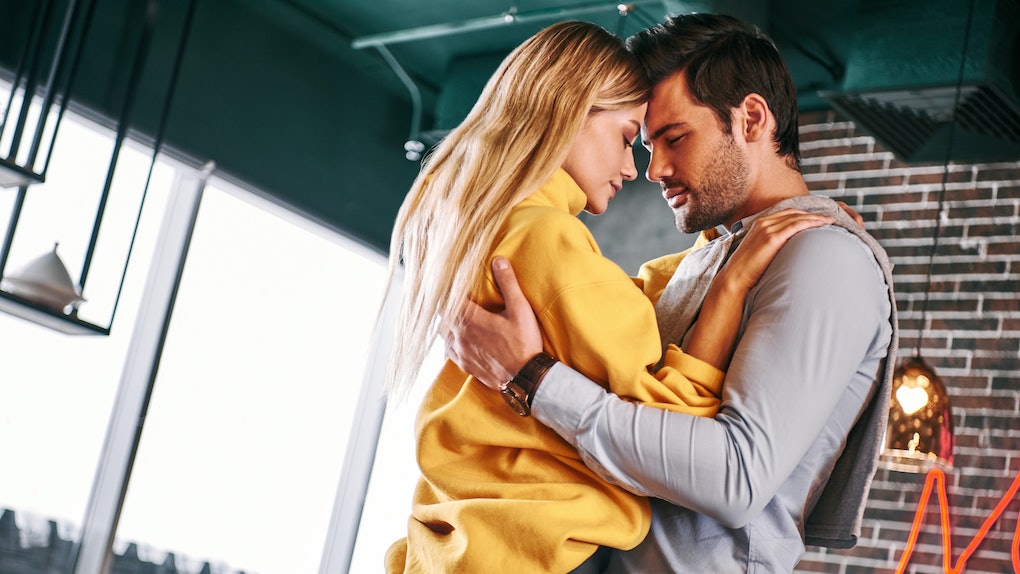 3 Myers-Briggs Pairings That Have The Hottest Chemistry, So Fan The Flames

Chemistry can be difficult to put into words, but when you feel it, there’s no mistaking it. It’s more than just compatibility on a practical level, like when someone checks all of your must-have boxes. Rather, it’s an inexplicable feeling that you just “click” with someone — in conversation, in between the sheets, and just about everywhere else. FYI, your personality type can offer some super valuable information for finding these kinds of connections. And the Myers-Briggs pairings that have the hottest chemistry may surprise you.

Some say that birds of a feather flock together. Others say opposites attract. So, which is it? TBH, it’s a little of both. The personality pairings that tend to have intense chemistry have at least one trait in common and at least one that differs. It makes sense when you think about it, too. Having some common ground is key (otherwise there could be constant conflict). But at the same time, contrasting qualities can produce a more well-rounded relationship, where each partner keeps the other in check.

Every Myers-Briggs personality has at least several types that they’re compatible with dating-wise. But fair warning: when these four pairings fire up a romance, it’s downright explosive.

At first glance, this might seem to be an unlikely pairing — The Campaigner (ENFP) and The Architect (INTJ) have three opposing traits. But that doesn’t stop the sparks from flying between these types. Why? Because they’re both incredibly confident, ambitious, and imaginative. And even though they only have one trait in common — the Intuitive preference — which means they both have an innate ability to read between the lines as well as a tendency to lean toward big-picture thinking.

Since they perceive the world the same way, these two personality types are able to fuel each other’s innovative, abstract ideas with enthusiasm. And that leads to long, deep conversations (which may or may not lead to sizzling sex). The open-minded, adventurous ENFP can also help the INTJ to open themselves up to new possibilities, while the INTJ, a rational Thinker through and through, can help to fine-tune and focus those sometimes disorganized ideas so that they’re actually feasible.

What’s often lacking in the INTJ’s life is spontaneity: something that the ENFP is a pro at. What the ENFP’s life is lacking is often logic and order, and that’s basically the INTJ’s middle name. In other words, these two types are the definition of Yin and Yang.

What do you get when you combine two Innovative, independent thinkers who love to find connections and deeper meaning in things? A passionate connection that’s never short on intellectual stimulation. Sure, the ENTP and the INFJ only have one trait in common (the Intuitive preference), but that’s where the beauty lies in their bond. The ENTP is always up for taking on a challenge, and that’s precisely how they view dating the Introverted, Judging INFJ. While they can they help to pull the INFJ out of their comfort zone and capitalize on their full potential, the easygoing, empathetic INFJ can appreciate their partner’s need for freedom and independence without taking it personally.

INFJ prefers structure and schedules (due to their Judging trait), while the ENTP likes to wing it. But these types are able to overlook all of their differences because they have one key thing in common: a sharp intellect, and a hunger for knowledge. What keeps the spark alive for this pairing is their natural ability to continue challenging each other in every aspect of life.

Charismatic, outgoing, and flexible, these personality types are like two peas in a pod. It’s no surprise, considering that they share three out of four preferences. Two Extroverts can co-lead a busy, fulfilling social life. Meanwhile, two Sensors process information in the same way (pragmatically, using their senses and present information), which means they can typically solve problems as a team super easily. And two perceivers tend to mesh well because they prefer to keep their options open and fly by the seat of their pants rather than plan out every hour of their day. The Perceiving preference also indicates that they’re both adaptable, and can easily embrace change.

If there’s one thing the ESFP rejects, it’s tradition. This personality type doesn’t play by the rules, and neither does the ESTP. That's one reason why their chemistry is off the charts. And these two personalities are both simultaneously low-maintenance and high-energy, which translates to an almost effortless yet endlessly exciting relationship.