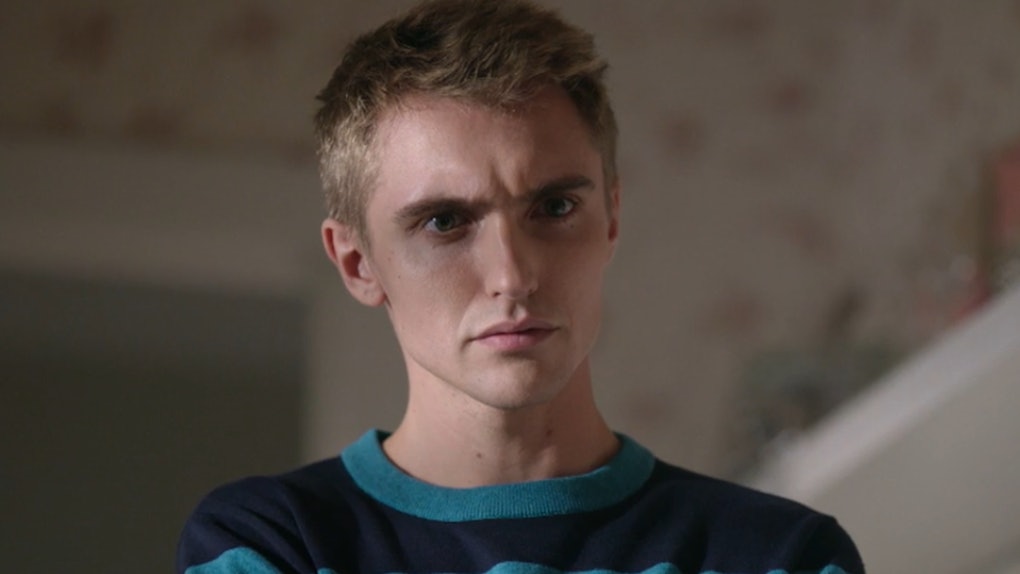 One character in Riverdale has remained shrouded in mystery for far too long, and it's about time that we get the truth. No, I'm not talking about the Black Hood (or maybe I am?); I'm referring to the brooding, taciturn, oozing-with-creepiness Chic, who has been lurking in the corner for all of the second half of Season 2. Up until now, that is, because Riverdale showrunner Roberto Aguirre-Sacasa promised fans that Wednesday night's new episode will finally answer all our questions about Chic. That's very welcome news, since Riverdale fan theories about Chic have been rampant in the fandom since even before he first appeared on the show in the Season 2 midseason premiere. Ahead of the new Chic-centric episode, let's go over all of the big questions and theories about Betty's secretive brother that the new episode will hopefully provide answers to.

First, here's a refresher on what we know about Chic. Back at the end of Season 1, Betty Cooper discovered that she had a long-lost brother somewhere out in the world. Her mom Alice Cooper revealed she was pregnant with her first child to then-boyfriend Hal while the two were in high school. Since Hal was not the father, he urged Alice to get an abortion, but instead, Alice check into the Sisters of Quiet Mercy for the remainder of her pregnancy and gave birth to her son Chic in secret. She then put him up for adoption and went back to Hal, keeping Chic's existence a secret for all these years.

In Season 2, Betty convinces her mom to help her find Chic, and they discover that he is living in a motel making money as cam boy. They invite Chic to live with them, but he seems to constantly make the Cooper household a center of chaos, climaxing in the murder of a mysterious man that showed up to the house asking for Chic.

Although Chic has been in eight episodes now, we still barely know anything about him, and his creepy stares certainly seem to suggest that he could be a huge, dark secret that he is hiding. Thankfully, showrunner Roberto Aguirre-Sacasa revealed on Twitter that Wednesday night's new Riverdale episode, entitled "Prisoners," will explain Chic's involvement in everything going on:

The tweet also included a shot of Betty holding up a photo of what looks like a young Chic, suggesting that we are going to learn about Chic's upbringing in foster care. The promo for the new episode also heavily features Chic, showing Jughead confronting Betty's brother and punching him:

With a bunch of Chic revelations about to hit Riverdale fans, let's discuss the major theories about the mysterious character that will hopefully be addressed in the new episode:

The question of Chic's father has been a major one in recent episodes, so this may be the most likely theory to be confirmed in the new episode. The theory that F.P. Jones is Chic's dad is one of the most predominant fan hunches about Chic's mysterious past, and that's because it makes a lot of sense: Alice and F.P. had a fling in high school, and Chic kind of looks like F.P. The only hurdle to this theory is Alice flat-out denying that F.P. is Chic's dad in a recent episode, but she could have been lying about that.

Although the F.P. theory is definitely the most prevalent, some fans think it has become too obvious and that Chic's father may be another character. Fred Andrews seems to be the next major guess, which would definitely be an interesting twist.

2. Who Did Chic And Alice Kill?

The biggest event that Chic has been a part of since his arrival on the show has been the murder of a shady man named Dwayne. Dwayne came to the Cooper house looking for Chic, and after that, all we know is what Betty saw when she got home: Alice and Chic were cleaning up Dwayne's dead body. Betty later discovered that Dwayne was a drug dealer, and accused Chic of being a drug addict, although that detail was never clarified.

The question that still remains is why Chic and Alice killed this man. Why was he really looking for Chic? What didn't Chic and Alice tell Betty? There is something going on there that is still unclear.

OK, now we've reached the big one. Chic has been a prime Black Hood suspect for pretty much this entire season, with each episode seemingly providing more clues that connect him to the masked killer. Even before he arrived in town, Betty's long-lost brother was a main suspect after the reveal that the Black Hood had a very close tie to Betty. Most recently, we saw Chic at the very end of the musical episode sitting still in the audience while everyone else freaked out after Midge was revealed to have been killed on stage — very suspicious behavior.

The Black Hood reveal seems like more of a season finale thing, but hey — maybe Riverdale will surprise us! Or at least the new episode could provide more clues that link Chic to the Black Hood.