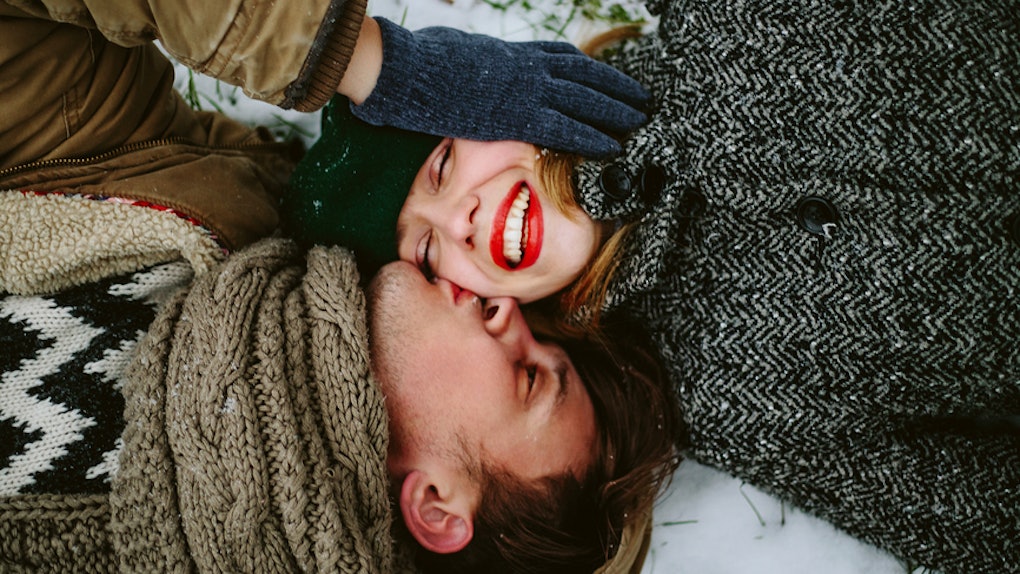 Blizzard season is fast-approaching, which means heavy parkas, duck boots, and — of course — sweaty, snowy hookups. Oh, yeah, that last one's a thing. After stocking up on canned goods and candles, "update dating app bio during a blizzard" should really be the next item on your winter storm checklist. Because, as any single person with thumbs and a smartphone can tell you, matches spike as soon as the snow starts falling (on one app, matches tripled during Winter Storm Jonas!).

Maybe it's instinctual (we could all use the extra body heat), or maybe it's because some dating apps will literally send around an alert saying that matches are at an all-time high, like a little Millennial mating call. Whatever the reason, blizzards tend to bring out the cuddliest and thirstiest sides in all of us.

Last February, with about three feet of snow falling outside of my Brooklyn apartment and zero leftovers in my fridge, I sweet-talked a handsome match into bringing me a large pizza (he ate one slice, I ate the rest — you're welcome for that mental image), watching reruns of The Bachelor, and petting my hair. It's probably the greatest interaction I've ever had with a man, and one I never would have experienced if not for the phenomenon that is swiping through a blizzard.

So next time your town is blanketed in snow and sexual tension, here are 23 hilarious lines you can throw into your dating app bio to snag a blizzard bae. Go get those pizzas, ladies.

For the women who aren't messing around.

If you're into NSA jokes.

If you're looking to lay a thirst trap in the snow.

For the girl who's usually got "I just want to get some free Chipotle out of this" on her profile.

If you love a good pun.

If you'd like to throw in some wintery song lyrics.

For the ladies looking to break the ice (literally and figuratively).

Is it just me, or are things warming up already?