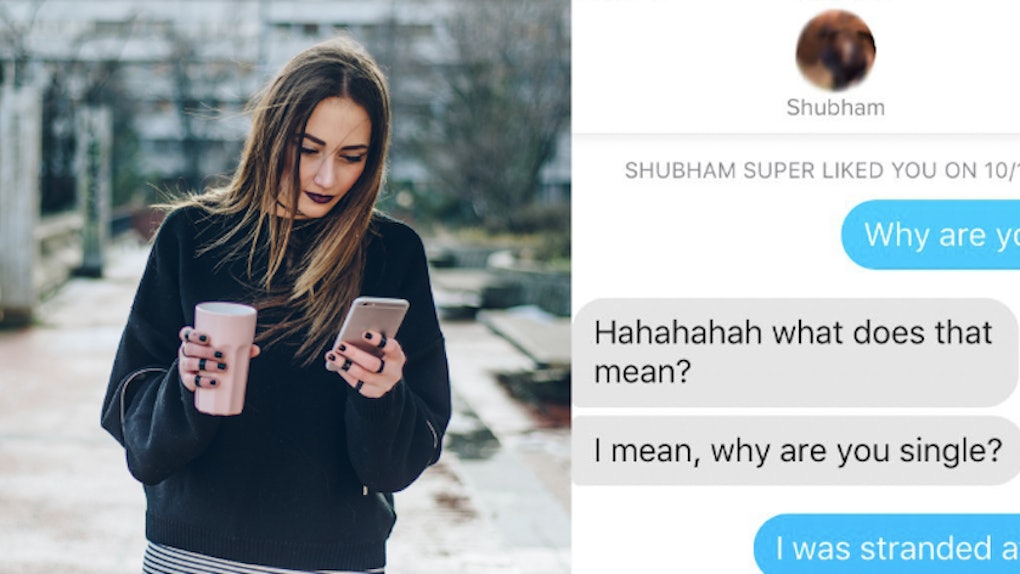 I Asked All My Tinder Matches Why They're Single, & Here's What They Said

Messaging your Tinder match "hey" only gets you so far. Congrats on kicking off a conversation, but... it'll probably only lead to banter as riveting as "Hey, how are you?" or even "Sup?" So during my most recent swiping sesh, I opened every conversation with a ridiculous question — I asked all my Tinder matches why they're single. I was surprised that I actually learned a lot from people's answers.

I was a little shocked that some people responded to my question seriously. There's no reason to be ashamed of being single, but the reason behind your relationship status can be intensely personal. Maybe you recently went through a breakup that put your heart through a meat grinder. Maybe you're secretly dying to be coupled up, but you're just not clicking with anyone. Or maybe you're dealing with personal stuff — a health scare or family issues, for example — that don't leave you with the time or emotional energy to commit to something serious. Who knows, right? Everyone's dealing with something different, and I don't know anyone who's dying to reveal their innermost thoughts and feelings to a stranger.

But maybe I should have had more faith in humanity. People really did open up! And it was a joy to behold.

For the record, my bio is simply "tbh i just wanna get some free chipotle out of this," which — as you'll see below — is an excellent way to sway a lot of people into offering you free fast-casual Mexican food. 10/10 would recommend.

I very quickly learned that this opening line is not for everyone.

Addy was down to play games, but he didn't really open up to me. I mean, I guess that's fair — these guys don't owe me anything, especially the truth about their private lives.

But even if Addy didn't spill his guts to me the way I hoped he would, I liked that he was fun to talk to, and he asked me out. He also gave me a very generous budget of $20,000 for my future engagement ring. Points for Addy!

"Lol i barely even know you, no offense." I mean, logical, but... come on. Where's your sense of adventure?

Still no dice, but at least he offered to tell me in person.

I started getting antsy. And by "antsy," I mean I straight-up lied and gave a ridiculous reason as to why I'm single in order to provoke these guys into giving me the truth.

I guess it kind of worked? But still, I wanted more. Vulnerable, honest, raw answers.

Sh*t just got real. Mase explained in right up front his bio that he "just got out of more than 10 years in a relationship, not even sure how to start over again." In our convo, he completely owned up to his role in why his relationship ended — he says he often prioritized the guys at his fire department over his girlfriend.

He lamented the fact that guys often only realize the mistakes they're making in a relationship when it's too late. But honestly? Mase seems to be a really thoughtful, self-aware guy. It sucks that he's going through a tough time right now, but I bet he's going to treat his next partner like a queen.

At first, Brian attributed his single status to working too much. He says he's trying to save up to buy a house.

What happened next was kind of magical. He admitted that "it kinda sucks" watching all of his friends get married and have kids while he's still looking to "mess around." A moment later, he added, "yeah that was weird actually lol. usually I say dumb sh*t to try and get a girl in bed."

I don't know if Brian felt it, but I definitely felt a moment of connection. We skipped past the small talk straight to a topic that required real vulnerability. It made me feel weirdly close to him after only a few minutes.

Not every guy was willing to let down their guard like that. Adrian sort of blamed girls who don't initiate interesting conversations on dating apps...

Ken might have misunderstood the question. (I liked his Chipotle comment by accident; my thumb slipped, and then I decided it was too awkward to un-like the message, so I left it. Whatever.)

Carlos says he hasn't met the right person yet, which... duh. I would assume that's why he's on Tinder.

But then he followed up with an interesting analysis of his dating habits that have been holding him back. I liked his honesty!

Ryan reminded me of the guy who strung me along for five months by saying, "I acknowledge that this is basically a relationship, but I don't want to use that word."

He actually gave a thoughtful answer about the pros and cons of being single and in a relationship. I don't agree that men need more "freedom and variety" than women, but I'm a busy girl and have better things to do than waste my time debunking tired gender stereotypes with strangers on Tinder. Onto the next one.

He explained that he's "looking for something serious" but also wants to "take things slow."

Carlos did not seem impressed by my "Fergalicious" reference, which disappointed me just a tiny bit. He said he's only been single for four months and he's "an old man with technology," which is part of the reason why he's testing out Tinder.

He followed up to say he prefers meeting people IRL, and finished strong my 100th Chipotle-related message of the day.

When I first started this experiment, I felt like a straight-up troll. But then when guys like Brian and Mase got really honest and vulnerable with me, I wondered if there might actually be something to this.

I love dating apps, but if I have to have one more conversation about what I studied in college or how my weekend's going, I might lock myself in my apartment with my cat for good. And honestly, it would be fine — I have a lot of wine and snacks, plus passwords to basically every streaming service.

Conversations on dating apps — even boring ones — used to thrill me, back when I was a dating app newbie. But the novelty wore off after a couple thousand swipes, and now, I rarely cackle over a funny message. I've even fallen asleep in the middle of texting small talk.

This experiment proved to me that it doesn't have to be that way. These conversations were bold, revealing, and actually made me feel more connected to my matches. Ask something outrageous, like the truth about why your match is single. You might like what you find.