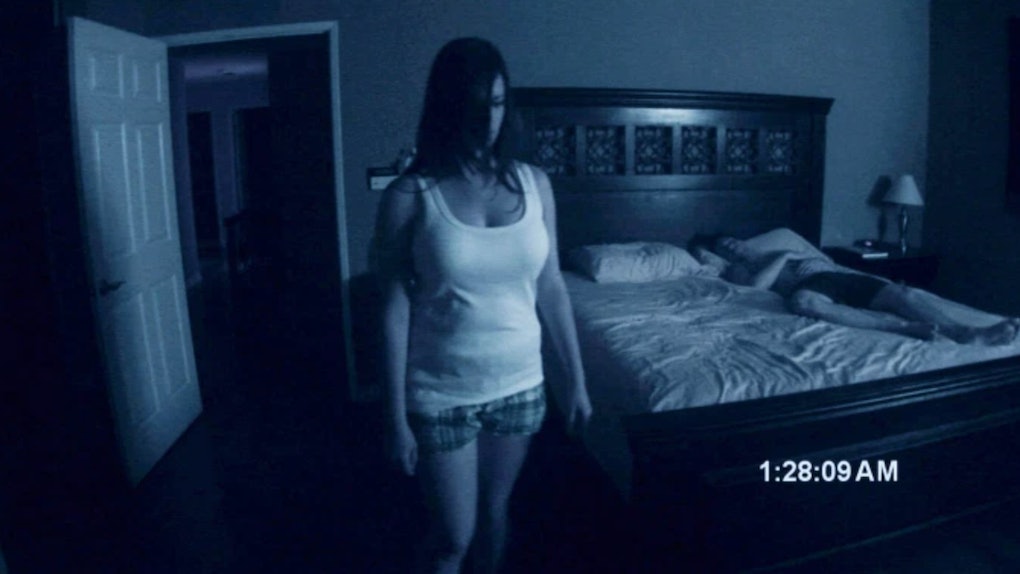 Whether it's Halloween, a rainy night, or you're just getting tired of rom-coms, horror is a genre that's always a solid choice for a movie night. The problem is, a lot of the most popular scary shows and movies are usually filled with blood and guts. If slashers aren't exactly your speed, don't worry. There are plenty of non-gory horror movies to choose from if you're in the mood for a scare but don't want to feel squeamish.

While traditionally you might think horror is synonymous with gore, that's actually not the case. Some of the scariest films in the history of cinema are less bloody and more thought-provoking. Traditionally, this was because movies could score ratings that were under "R" (which meant more viewers and more sales). Now, however, it's because film buffs realize it's not necessarily the blood that makes movies scary, it's the tales they tell.

If you're a fan of ghost stories, Paranormal Activity or The Conjuring will scratch that supernatural itch. If you want something sexier, watch It Follows or Gerald's Game for horror films that also make great date night watches. Perhaps you want to stick with classic horror. If so, The Birds and Psycho are films everyone needs to see at least once. Whatever your taste, there's a non-gory winner that will make even the most hard-to-please horror buff happy.

Getting over the death of a husband is hard, but for this single mother, the fact that her son is deathly afraid of a monster that may or may not be lurking around their house might be harder, as seen in The Babadook. If you're a fan of twists and turns and creepy children, this 2014 Sundance fave is for you.

Chances are you've already seen Paranormal Activity, but when it comes to a non-gory horror movie, the franchise is hard to top. The original 2009 film made "shaky cam footage" all the rage, and considering it's about a young couple trying to catch footage of their haunting with a video camera, it's low-key relatable.

Despite its title, the original 1974 Texas Chainsaw Massacre was actually filmed to not be that violent. Director Tobe Hooper wanted to get a "PG" rating for his film, so he took it easy on the bloodshed (and despite there being some, you don't actually see any coming from someone's body). However, his plan didn't work and the MPAA gave the movie an "X" (though it was later downgraded to "R").

Either way, the flick scored an 89% on Rotten Tomatoes and most fans agree: It's the best of the franchise.

After having sex with her boyfriend, a college student is followed by a killer entity. The only way to stop it is to pass it on to someone else (by, you know, hooking up). This fascinating take on sexuality and transmitted diseases against a backdrop of supernatural horror makes It Follows a must-watch.

The scariest part of seeing a ghost might just be the fact that no one believes you, something Claire (Michelle Pfeiffer) experiences in What Lies Beneath. Whether the strange voices and premonitions she sees is related to her husband's (Harrison Ford) betrayal the year prior, you'll just have to watch to find out.

I don't know what's scarier, a tape that kills people seven days after they watch it or remembering what it was like to have to rewind a VHS. No, The Ring isn't known for its gore, but it will definitely make you want to sleep with the lights on (and the TV off) after watching it.

If you have kids or are planning on it in the future, Roman Polanski’s 1968 classic will haunt you long after the credits roll. Following a pregnant woman who believes her baby is otherworldly (like, not in a good way), Rosemary's Baby is creepy and thought-provoking, which makes it one of those films that will stick with you for a long time.

The 2019 thriller about a lonely woman who befriends some teenagers will satisfy your craving for a psychological rush. Starring Octavia Spencer, Ma is a fun and chilling watch that will make you think twice about getting too friendly with strangers who let you drink in their basement.

Ornithophobia, or a fear of birds, is pretty common, but after seeing Alfred Hitchcock's 1963 classic, you'll never look at a pigeon the same way again. The Birds is about a series of horrific bird attacks on a town and how one couple tried to live through — and escape — the horror.

After a man is unexpectedly killed, his spirit haunts the house where he once lived. Unlike other films about hauntings, this one plays on the whole "person in a sheet" concept to create a truly spooky vibe. If you're looking for a deep and artsy film, watch A Ghost Story to find yourself both scared of and sad for spirits left behind.

Jack Nicholson's take as an unhinged hotel caretaker in The Shining is one of his most chilling roles ever. The movie is based on Stephen King's famous novel by the same name, and while you might want to cover your eyes once or twice (like the scene of the twins or with the elevator), for the most part, the scariness is cerebral. While the sequel, Doctor Sleep, is gorier, it's still worth a watch if you're feeling brave enough to stomach a little more blood.

Sex games gone wrong are nothing new, but when the result is so psychologically and physically twisted, it will make you triple check that you have the key to those fuzzy handcuffs close by. Gerald's Game comes from the brilliant mind of Stephen King and will 100% make you avoid isolated cabins for a while.

Written and directed by M. Night Shyamalan, Signs is a 2002 sci-fi thriller that isn't as much outright scary as it is generally eerie. Starring Joaquin Phoenix, this is a great film for a night of thought-provoking chatting after the credits roll.

Just because The Blair Witch Project had a tiny budget, it doesn't make the 1999 horror film any less terrifying. When three film students head to a town to learn about an infamous murderer, things quickly go very wrong as they become part of their own documentary.

If you want something a little more realistic than ghosts or goblins, Contagion, the 2011 film about a deadly virus, hits scarily close to home during times of the coronavirus pandemic. No, there's not a lot of blood or guts, but the freakily familiar vibes viewers in 2020 will pick up on is downright terrifying.

Meeting your SO's parents is scary on its own, but in this thriller, things get even stranger after the awkward introductions. Daniel Kaluuya and Allison Williams star as an interracial couple that's not what it seems in Jordan Peele's smash directorial debut, Get Out.

Funny Games actually has a funny history. The film was originally made in 1997, but the director, Michael Haneke, wanted to redo it, so he re-filmed it shot-for-shot and re-released it in 2007. Basically, two guys take a family hostage and make them play twisted games just for the "fun" of it. If you're a fan of the 1971 classic A Clockwork Orange this flick will feel creepily familiar.

The Conjuring is the first film in the popular series and follows demonologists Ed and Lorraine Warren as they investigate some paranormal hauntings happening to a family. Since hauntings tend to be more creepy and less gory, you can dive into the entire Conjuring universe for some not-so-bloody scares.

The first film in M. Night Shyamalan's popular Eastrail 177 Trilogy, Unbreakable is about a man who inexplicable survives a train wreck. The entire trilogy has plenty of superhero elements for supernatural fans and will keep you on your toes with each new installment.

If you haven't seen the famous 1960 psychological thriller that sparked multiple films and the popular TV show Bates Motel, Psycho should be considered required viewing. While there's not tons of blood (and the blood you do see was actually just filmed with chocolate syrup), the end twist and famous shower scene makes it one of the best horror movies of all time.

More like this
10 Rainy Day Movies To Watch On Netflix That Are Perfect To Pass The Time
By Kristen Perrone and Lexi Williams
These Fake 'Riverdale' Brand Names Are Even Better Than The Real Thing
By Rachel Varina
Emma Stone's 'Cruella': Premiere Date, Trailer, Cast, Plot, & More
By Abby Monteil and Dylan Kickham
Stay up to date