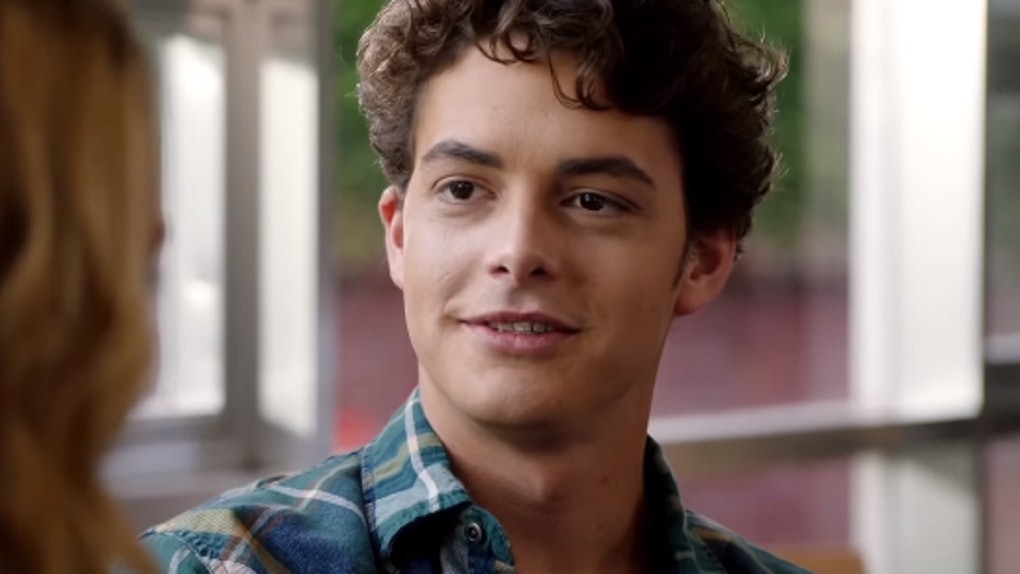 Before he was the sweet boy next door in Netflix's To All the Boys I've Loved Before, Israel Broussard headed to college as Carter in the 2017 slasher film Happy Death Day. Playing sidekick to Jessica Rothe's Tree, a student forced to mysteriously relive her birthday when a serial killer repeatedly murders her, Broussard now has a storyline worthy of Valentine's Day viewing in the scary flick's new sequel. You can still expect a jump scare or two, but Happy Death Day 2U star Israel Broussard wants fans to understand his character and his romantic side. The actor's thoughts on Carter's new love triangle and how the character relates to TATBILB's Josh Sanderson may be the unlikely dose of cuteness you need this Feb. 14.

Hitting theaters on Valentine's Day, Happy Death Day 2U picks up when the original movie ended, showing Carter and Tree close and cozy in his dorm room after finally defeating her killer and breaking the time loop in which she was stuck. Carter's roommate Ryan (Phi Vu) spoils the celebration when someone in a baby mask kills him, leading to his own inexplicable resurrection. Sound familiar?

As Tree and Carter attempt to help Ryan destroy this pattern, they realize that Ryan's quantum reactor project caused Tree's own Groundhog Day experience. The kids activate his reactor in hopes of closing the loop, but instead, Tree is sent back to her birthday the day before. This time, nothing is quite how it should be, and that includes Carter's relationship status.

"He's a very optimistic dude, but after the first take or so, you get back into the groove with him pretty easily," Broussard tells Elite Daily about reprising the role of Carter, who now has a girlfriend in Tree's alternative timeline. "I like how, in this one, there's more to play around with with this love triangle. You can see his heart still longing for Tree, but he's with [another girl]. It was interesting playing that because I wanted him to still be likable and still be the good guy and not be like a sleaze."

While the film includes the thrills and gore that are synonymous with the slasher genre, an emotional subplot involving Tree's balance between her family and Carter quickly becomes one of Happy Death Day 2U's highlights. In addition to its more touching moments, the movie gives its female protagonist an opportunity to be smart and proactive rather than victimized.

"It’s always annoying when the blonde girl in the horror movie is running up the stairs or exactly into harm's way," Broussard says, comparing Tree's resilient energy to Jamie Lee Curtis in the latest Halloween film. "[Being] versed in that ideology on the whole 'the girl in the scary movie' [trope] is a really good thing and I think it's for the best."

While Carter's romance is more understated in Happy Death Day 2U, Broussard may have an opportunity to truly thrive as a love interest if he returns as Josh in the upcoming sequel to teen rom-com To All the Boys I've Loved Before. While Lara Jean Covey fell for the popular Peter Kavinsky and her sister dumped Josh, the character's adventures in love still remind Broussard of the earnest Carter.

Likening Carter to Josh's older brother, Broussard says about the two boys, "They're similar in a lot of ways, but I think Josh has a little bit more of a sharp tongue. Josh has this immature notion to say whatever's on his mind."

Compared to his role in Jenny Han's bestselling book, filmmakers included far less of Josh in their finished product. However, TATBILB director Susan Johnson has spoken about wanting to develop the character in the next film, which will primarily follow the structure of Han's P.S. I Still Love You. Although Lara Jean's Model UN crush John Ambrose McClaren is expected to take Josh's place in her love triangle with Peter Kavinsky, Broussard has his own hopes of what may be next for the Covey girls' neighbor.

"I’d really love [to see him have a] little more friction [with] Peter and Lara Jean, because I feel like some of that was missing in the first one," he says. "I’m happy with the direction they went with it and I’m happy with the reasons why, but if we were gonna expand on Josh a little bit, I’d definitely want it to be some tension between Josh and Lara Jean and then a lot more friction between Peter Kavinsky and Josh."

While production plans for the TATBILB follow-up are under wraps, a mid-credits scene in Happy Death Day 2U hints at the possibility of a third movie in the franchise. "The stakes would definitely have to be raised [for Happy Death Day 3]," Broussard says, spilling that the cast discussed the chance of another movie while filming the credits' teaser. "I’m sure [director] Chris Landon could find some crazy way to continue the story and make it its own movie at the same time."

Before we see more of Broussard in high school and college love stories, you can catch him on the big screen this week in Happy Death Day 2U. "Just go be entertained for a little bit," he advises moviegoers. "You’re gonna have a great time, you’re gonna get some laughs, you’re gonna get a little adrenaline rush, and in the second one, you might even tear up a little bit."

More like this
Kathryn Hahn Hopes To Explore Agatha's Backstory In Future Marvel Projects — EXCLUSIVE
By Dylan Kickham
17 Tweets About Simu Liu In The 'Shang-Chi' Teaser, From Proud 'Kim's Convenience' Fans
By Dylan Kickham
Kristen Wiig Is Making A Musical About Cinderella's Evil Stepsisters For Disney
By Dylan Kickham
Stay up to date