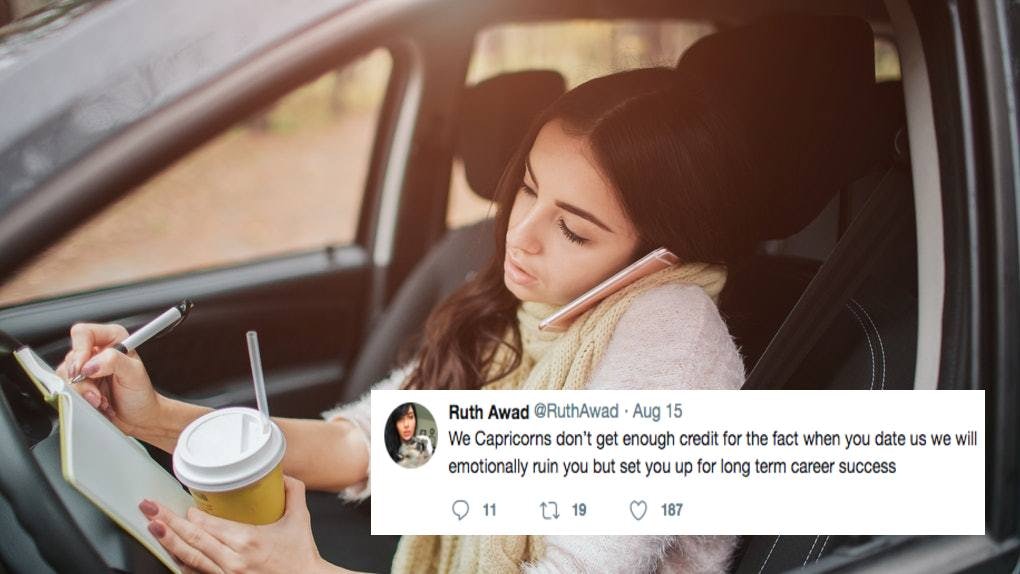 If your ideal date is Netflix and chilling, then you probably shouldn't date a Capricorn. Those born under the sign of the goat don't know the meaning of "chill" — how can they possibly relax when there's so much that needs to get done? For Capricorns, all work and no play is their lifestyle of choice, which can make dating one (or even scheduling a date with one) a challenge. People whose birthday falls between Dec. 22 and Jan. 20 tend to be serious, but not humorless, so even they will appreciate these spot-on tweets about dating a Capricorn.

I don't think anyone would mistake a Capricorn for a romantic — TBH, I'm pretty sure it was a Capricorn who first coined the term "dick appointment." But that doesn't mean that Capricorns aren't interested in romance, just as long as their partner loves late nights at the office and hates public displays of affection (or even private ones, really) as much as they do. Although they may have a reputation for being one of the duller zodiac signs, Capricorn simply want to help others work harder and budget better. If you have ever dated a Capricorn, get ready to relate so hard to these hilarious tweets.

They Aren't Quite Open Books

According to a Capricorn, feelings are irrational, and therefore, taking time to explore their feelings isn't an effective use of time.

Robots are more efficient than humans after all (and far less encumbered by emotions).

They Tend To Have A One-Track Mind

That track being their career track, of course (as well as their date's).

They're A Bit Morose

Time is money for a Capricorn, but time is also fleeting, and they have no problem acknowledging that. They may be ambitious, but that doesn't mean their glass is half-full.

They Have No Problem Cutting Someone Out Of Their Life

Are you keeping a Capricorn from achieving their goals? Do your career aspirations not align with their own? Those born under this sign are all about getting that bread, and if you aren't down with that, they won't hesitate to bid you adieu.

They Don't Feel The Need To Justify Their Actions

Do you really think a Capricorn has the time to explain each and every decision they make to you?

They Prioritize Work Over Everything

As much as they'd love to go on a date with you tonight, they also have to reorganize their closet, check their stocks, compose a dozen emails, and floss, so maybe they could squeeze you in next week.

They Always Plan Ahead

If you want to schedule an appointment... er, date with a Capricorn, you'll probably have to pick a time three months in advance.

Holding themselves to impossibly high standards means that Capricorns manage to achieve some pretty impressive feats — like scheduling three dates in one night and managing to keep them all from running over their allotted time limit.

They Have High Standards

It's no surprise that — as Capricorns expect greatness from themselves — they also have high standards for others. I dare you take a Capricorn on a date while wearing a wrinkled shirt and see what happens.

They Can Be A Touch Tedious

OK, maybe spending time with a Capricorn isn't quite like watching paint dry or grass grow, but you should be prepared for a lot of itineraries and questions about your 401k plan.

They Meddle More Than They Should

Are you reaching your full potential? Are you planning for your future? Are you spending money wisely? Are you keeping your bedroom clean? Capricorns want to know!

Yes, Capricorns love to succeed (and to watch their fellow Capricorns succeed), but when they care about someone, they'll work to help that person become more successful, too.

They Believe In The Power Of Tough Love

Capricorns can be tough, but there's something to be said for a person with an incredible work ethic. They may not work hard to keep people they don't see a future with in their lives, but once they find the right match, they'll work tirelessly to make both that relationship and that partner thrive.

This article was originally published on Sep. 18, 2019