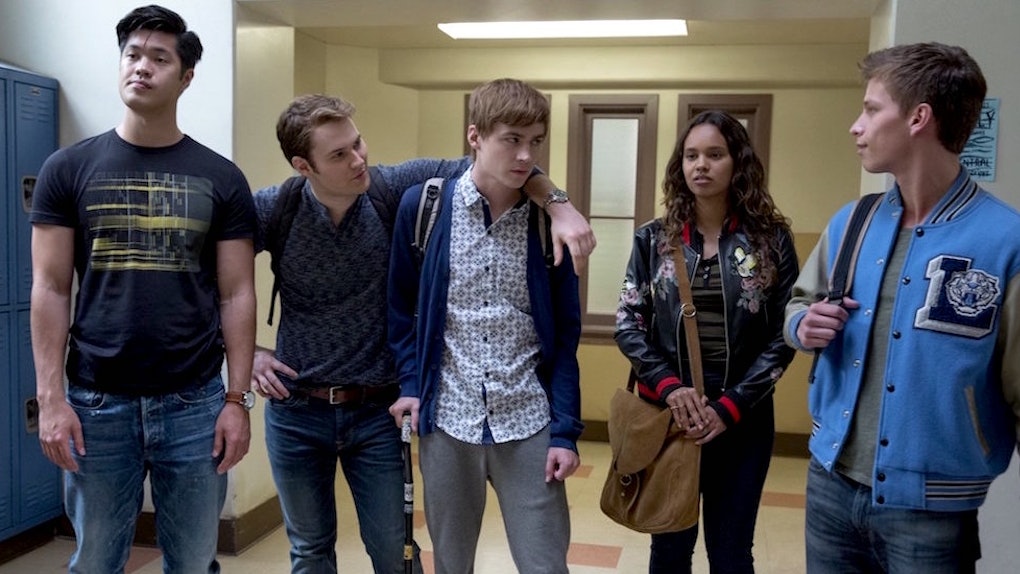 From the sounds of things, 13 Reasons Why fans might have to wait a little bit longer before they find out what will become of Clay Jensen, Justin Foley, Tyler Down, and the rest of the Liberty High students in Season 3. According to a new report from Deadline, the cast of Netflix's buzzy teen drama are in the thick of contract renegotiations right now instead of beginning production on the new season, and 13 Reasons Why Season 3 may be delayed because of it. Let's get into all the drama that could hold up the third season.

Reportedly, the first table read for 13 Reasons Why Season 3 was scheduled to take place today (Thursday, Aug. 9), but the main cast of the show is still in the process of renegotiating their contracts for the upcoming season. If the contracts are not agreed upon by Monday, which is when Season 3 is scheduled to begin production, then the series will likely be forced to extend its production schedule.

The issue, as you might have guessed, is money. It is traditional in the modern television landscape for stars of successful shows to push for raises after two seasons, and since 13 Reasons Why has been a huge hit for Netflix, it is no wonder why the eight stars of the series are demanded their fair share of the earnings. Reportedly, Dylan Minnette, who is now the sole lead of the show due to Katherine Langford leaving after Season 2, is seeking a Season 3 salary of $200,000 per episode. The other members of the show's main cast — Brandon Flynn, Alisha Boe, Justin Prentice, Christian Navarro, Miles Heizer, Devin Druid, and Ross Butler — are all reportedly pushing to get for around $150,000 per episode.

The cast's new payment demands are a marked raise from their reported starting salaries for the first two seasons of 13 Reasons Why. When the teen drama began, the main cast was said to be making somewhere between $20,000 to $60,000 per episode, with Dylan Minnette getting a slightly higher $80,000 per episode estimate.

The big bump in the cast's salary requests is likely due both to the fact that 13 Reasons Why has proven itself as a hit series for Netflix, and to the recent precedent for Netflix giving massive pay raises to the casts of its hit shows entering Season 3. A few months back, it was reported that the Stranger Things stars would be making between $250,000 and $350,000 per episode for the show's upcoming third season, a considerable raise especially for the child stars who were relative unknowns before the show and reportedly making a tenth of that in the first two seasons.

Apparently, Netflix and the 13 Reasons Why cast are closing in on an agreement right now, so hopefully the third season can begin production soon without too much of an interruption. If not, then fans might have to wait longer than they had anticipated to finally see those Season 2 cliffhangers resolved. 13 Reasons Why Season 3 is slated to premiere sometime in 2019.