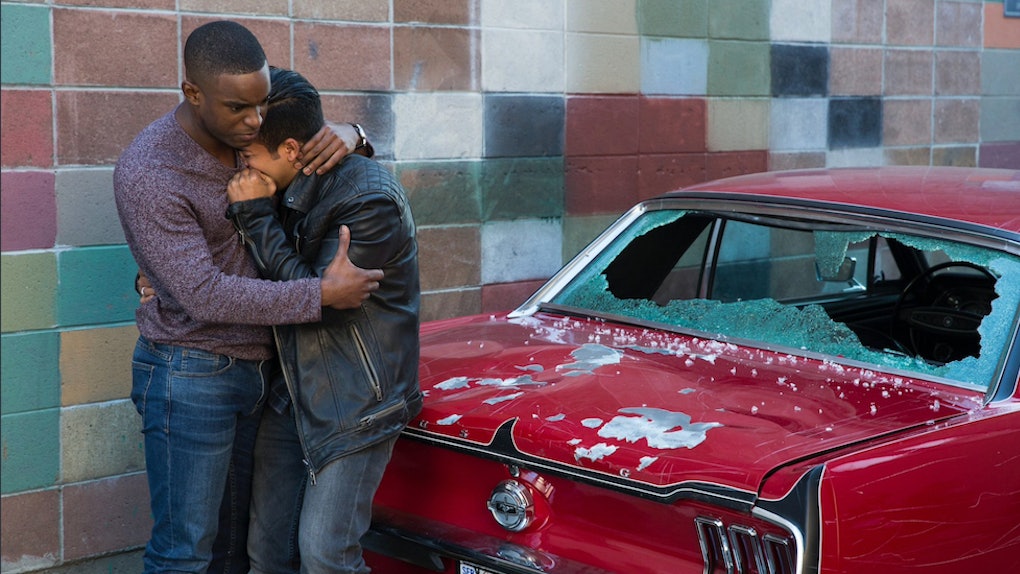 All those questions that you still have from the end of Season 1 of 13 Reasons Why are about to be answered. The controversial teen drama is almost back for its second season, and the first official photos of 13 Reasons Why Season 2 show that fans are in for a wild ride. Netflix just posted four photos from the new season, and they might reveal which characters will be taking center stage in the upcoming season.

The four first look photos feature new looks at Jessica Davis, Clay Jensen, Bryce Walker, Tony Padilla, and most tellingly, Liberty High's school counselor Mr. Porter. Half of the photos are no real surprise — the shot of Clay just shows him sitting at his desk and talking to a woman (possible a flashback scene when Hannah was still alive), and the shot of Jessica shows her in court holding up photos of herself with the words "a drunk" and "slut" scrawled over them, which is no real reveal since we knew the season would revolve around Jessica's court case and that cryptic Polaroids would be involved.

The big reveals come in the other two new photos, both of which feature an emotional new side to guidance counselor Mr. Porter. In one photo, an enraged Mr. Porter is confronting serial rapist Bryce Walker, grabbing him by the neck. In the other, Mr. Porter seems to be comforting a crying Tony Padilla next to Tony's freshly busted car. Check out all the new photos below:

The Mr. Porter shots are definitely the most compelling bits of new information. As fans will recall, the Season 1 finale of 13 Reasons Why revealed that Mr. Porter was the subject of Hannah's final tape, due to the fact that the school counselor was not there for her when she was trying to open up about her rape. Showrunner Brian Yorkey told the Hollywood Reporter that in Season 2, Mr. Porter's apathy has been replaced by an overzealous determination to help any student who needs him, as he tries to make up for his culpability in Hannah's suicide:

Mr. Porter will be coming to terms with the way that he let Hannah down and will be determined not to let any kids down in the future. His story is one of the most compelling to me. We’ll see a man who is determined to reach every kid who needs to be reached and help every kid who needs to be helped, whatever it takes. I think he will probably go out of bounds a bit in the other direction, trying to be helpful in the best way that he knows.

These new photos definitely illustrate the points that Yorkey made about Mr. Porter's character evolution. At the end of Season 1, Clay hands Hannah's tapes over to Mr. Porter, including a newly added recording of Bryce admitting that he raped Hannah. Some viewers theorized that Mr. Porter may dispose of the tapes and cover up Hannah's rape, but these new photos prove that he is devoted to doing the right thing now, and will confront Bryce after finding out the truth.

It is less clear what is going on in the photo with Tony. Obviously, someone busted Tony's precious car, but why? We know that 13 Reasons Why is all about tackling hot-button issues, so could this be hinting at a new Tony-centric storyline about either homophobia or racism at Liberty High? It's just a guess, but the photo definitely confirms that there is a rough road ahead for Tony in Season 2.

The second season of 13 Reasons Why will premiere on Netflix on May 18.

More like this
'Never Have I Ever' Season 2: Release Date, Cast, Trailer, Photos, & More
By Ani Bundel
These Tweets About Regé-Jean Page Leaving 'Bridgerton' Are Royal Bummers
By Cianna Garrison
'The Circle' Season 2 Cast's Instagrams Show Off Their IRL Social Media Skills
By Abby Monteil
Stay up to date