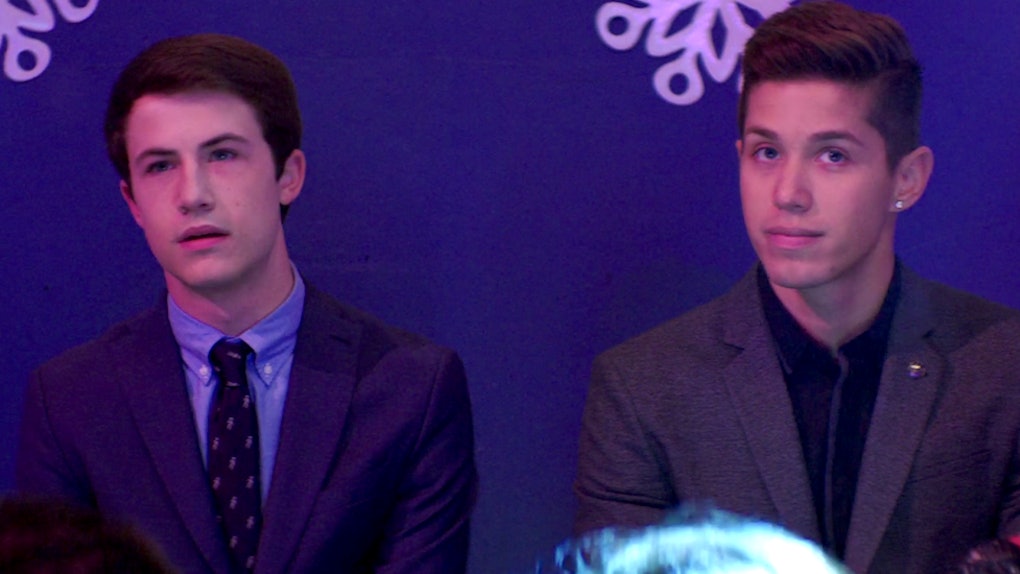 There is a lot going on in 13 Reasons Why. The Netflix teen drama employs time jumps, a sprawling ensemble cast, and some pretty subtle foreshadowing and homages that can make elements of the show confusing to some viewers. While the main story about Hannah's suicide is easy to follow, there are some really cool Easter eggs and references hidden in the show that you might have missed, and also some behind-the-scenes stories you haven't heard that make the series even better. These secrets about 13 Reasons Why are a must-read for every fan of the show.

1. Clay and Hannah have a shared taste in music.

Throughout the first season, 13 Reasons Why was showing us a lot more about Clay and Hannah's bond than fans may have realized. Both teenagers have the same poster hanging in their rooms: the poster for Arcade Fire's 2014 Reflektor tour. It is kind of sweet to imagine that they may have both gone to the same concert before they really even knew each other.

Obviously, we all know that 13 Reasons Why is based on the best-selling 2007 YA novel of the same name by Jay Asher, but neither of the two biggest stars of the Netflix adaptation had read the book prior to auditioning for their parts. Both Katherine Langford and Dylan Minnette revealed that they did not read the book before auditioning for Hannah Baker and Clay Jensen. They explained that reading the book may have added an extra pressure or stiltedness to their interpretations of the roles.

3. Dylan Minnette is outside Clay's house on Google Maps.

Yep — diehard 13 Reasons Why fans got a surprise when they searched Clay Jensen's address (which is a real family's home) on Google Maps and switched to street view. Although the face is blurred out, it definitely looks like that's Dylan Minnette posing in front of Clay's house for the whole world to see.

4. You can listen to all of Hannah's tapes online.

You can get the full 13 Reasons Why experience by going to the show's website and listening to all of Hannah's recordings. It's very chilling stuff, so you have to enter your age to get access to the audio.

5. Katherine Langford was cast over Skype.

A native of Perth, Australia, Langford was halfway around the globe when the 13 Reasons Why production team was casting the central role of Hannah Baker. Langford auditioned for the role via Skype, and wound up being cast on the show before even meeting the producers or other cast members in person.

6. The cast has matching tattoos.

After 13 Reasons Why premiered, series stars Alisha Boe, Tommy Dorfman, Brandon Flynn, and executive producer Selena Gomez marked the occasion by all getting matching tattoos on their wrists. The semicolon tattoo that they all got is a hugely popular symbol among people battling depression and suicidal thoughts — which is obviously a huge part of the show. The tattoo is meant to give you hope to carry on.

The biggest name attached to 13 Reasons Why is not even seen in the series. Selena Gomez has been attached to adapting Jay Asher's book for nearly a decade, and originally, she was going to star as Hannah in a film version. However, as the movie began to morph into a Netflix series, Gomez, Asher, and the production team agreed that she may actually be too famous for the part, and decided to look for a relatively unknown actress to embody Hannah Baker.

8. You can buy the nail polish Hannah uses to write on her tapes.

Hannah writes the names of the subject of each of her tapes onto the cassettes with a deep blue nail polish. Blue is a very prominent color in 13 Reasons Why, with the show's production designer revealing that she choseThe color is actual called Endless Blue, and it is made by Sinful Colors. You can buy your own bottle on Sinful Colors' website.

9. Taylor Swift has a cameo.

Selena Gomez made sure to give her bestie Taylor Swift a subtle shout-out in her series. In the background of one of the scenes, fans have spotted a poster of Taylor Swift's album 1989.

10. You can read Tony's recollection of the events.

Tony was the person that Hannah entrusted with her tapes, and thanks to an old blog created after the 2007 release of the 13 Reasons Why novel, fans can actually read Tony's thoughts in an online diary. Like the YouTube clips of Hannah's tapes, Tony's blog is kinda of chilling stuff — it is called "Hannah's Reasons" and exists on BlogSpot, although it has not been updated since 2009.

Speaking of Tony, one of the character's most notable hobbies is fixing up and driving around in his slick car. That's why it may surprise some fans to learn that actor Christian Navarro didn't know how to drive before being cast to play Tony. He revealed that the production team got him driving lessons right after casting him, and now he is a licensed driver for the first time in his life.

12. The timestamps at the end of Season 1 are meant to give hope.

One tiny detail viewers may not have caught at the end of Season 1 is the date that some of the characters are recording their testimonials for the trial concerning Hannah's suicide. The video recordings show that the interviews are taking place on November 10, 2017, but the show actually premiered on Netflix in March of 2017. The message behind this choice is meant to tell viewers that there is still time to reach out to someone who may have suicidal thoughts and try to help them.

13. The show is one degree from Kevin Bacon.

We all know the famous "six degrees from Kevin Bacon" game, and the 13 Reasons Why cast would totally rule at it, because the show includes none other than Kevin Bacon's daughter. The tatted barista Skye is played by Sosie Bacon, daughter of Kevin Bacon and Kyra Sedgwick.