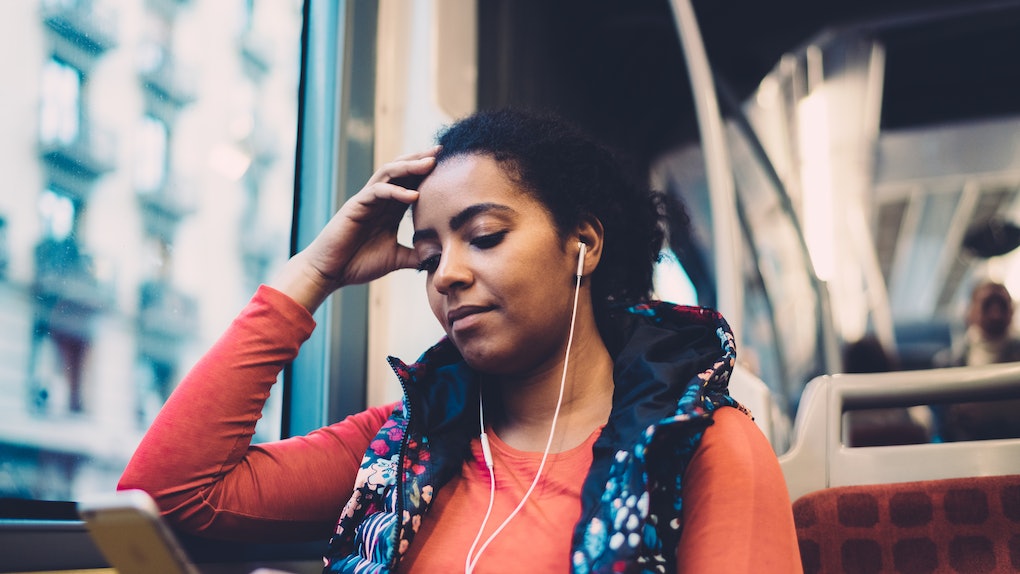 12 Songs About Loving Someone Who Doesn't Love You Back

Falling in love is exciting, but finding out that the object of your affection doesn't feel the same way is devastating. They call it a crush for a reason, y'all. It's a sad fact of life that your feelings are not always going to be reciprocated, and as painful as it is when it happens, you're definitely not going to be the first person who's experienced this. There are countless songs about loving someone who doesn't love you back, and even when you're feeling totally alone, it might help to know you're not the only one who's ever been crushed by a crush.

Unreciprocated feelings don't always have something to do with you. It's possible that the person you're crushing on already has feelings for someone else. Your crush might even be dating someone else. And if the person you love doesn't feel the same way, that's not a reflection on who you are as a person. That special someone you have your eye on may someday change their mind about you, but that's never a guarantee. If you're looking to move on to someone new (or just want to feel understood), then these songs about unrequited love are for you.

"Just A Friend To You" By Meghan Trainor

Is anything worse than the "friend zone"? "Just a Friend to You" by Meghan Trainor is perfect for anyone who's ever been in a relationship that feels more than platonic — except the other person doesn't see it that way.

"Not In That Way" By Sam Smith

Raise your hand if you've ever been told, "I like you, but not in that way." In "Not in That Way," Sam Smith nails the devastation of being cared about by another person, but not exactly in the same way that you "care" about them.

I seen you with your other dude / He seemed like he was pretty cool / I was so broken over you / Life, it goes on, what can you do?

Feelings don't just go away after a breakup. You can still harbor feelings for an ex after they've moved on to someone new. Post Malone's "Better Now" proves that sometimes it's more painful to have loved and lost than to have never loved at all.

You make me so happy, it turns back to sad, yeah / There's nothing I hate more than what I can't have / You are so gorgeous it makes me so mad

Sometimes the problem isn't that your crush is unavailable — sometimes you're the one that's taken. "Gorgeous" is all about a magnetic yet elusive flirt that Taylor Swift wants and can't have, and her inability to be with him only fuels her desire, despite the fact that she already has a boyfriend.

"Call Out My Name" By The Weeknd

I said I didn't feel nothing baby, but I lied / I almost cut a piece of myself for your life / Guess I was just another pit stop / 'Til you made up your mind / You just wasted my time

People don't always fall at the same time. What may be a casual fling for someone might be the real deal for someone else, and as The Weeknd sings in "Call Out My Name," it's possible to want someone to stay even though they don't want you.

"Without Me" By Halsey

In an ideal relationship, you'd get out of it what you put into it. Of course, that's not always the case. Halsey's "Without Me" is all about the experience of falling hard and fast for someone who — rather than returning your feelings — takes that love for granted.

"Need Ur Luv" By Charli XCX

Boy, you really messed around / Put me six feet underground / Always kick me when I'm down / But I'm still driving through your town

A crush can be so intense that even rejection can't get that person off your mind. Charli XCX's "Need Ur Luv" is all about wanting so badly for a love to be reciprocated that you're willing to hurt yourself in the process.

When you really love someone, you might believe that — with enough convincing — you can get them to feel the same way. But as Justin Bieber's "Memphis" demonstrates, you can't persuade someone into showing you the affection you crave.

It's a bad religion, ooh / This unrequited love / To me, it's nothin' but a one-man cult / And cyanide in my styrofoam cup / I can never make 'em love me

Unrequited love truly is like a bad religion that you follow blindly and without question, simply because it brings you comfort. Frank Ocean has this revelation in "Bad Religion," and although he's helpless to escape his feelings, he at least recognizes that an unreciprocated crush can be as irresistible and destructive as a cult leader.

Not everyone is going to get you. They may think you're "a little too much" and write you off rather than getting to know you. But as Lorde points out in "Liability," you're better on your own than with someone who won't give you a fair chance.

As improbable as it sounds, finding out that someone doesn't feel the same way can actually be a blessing, because it might convince you to move on to someone new. "Tears" by Clean Bandit revolves around the idea that rejecting you is sometimes the kindest thing a crush can do, even if it still hurts.

Loving someone who doesn't love you back can be messy. In trying to win someone else's affection, you might sacrifice your dignity or make yourself vulnerable. But as Bebe Rexha sings in "I'm a Mess," it's OK to put yourself out there as long as you still love yourself through it all.

Unrequited love sucks, and I don't think anyone can disagree with that. But unrequited love did result in all of these great bops, so I guess it's good for something!