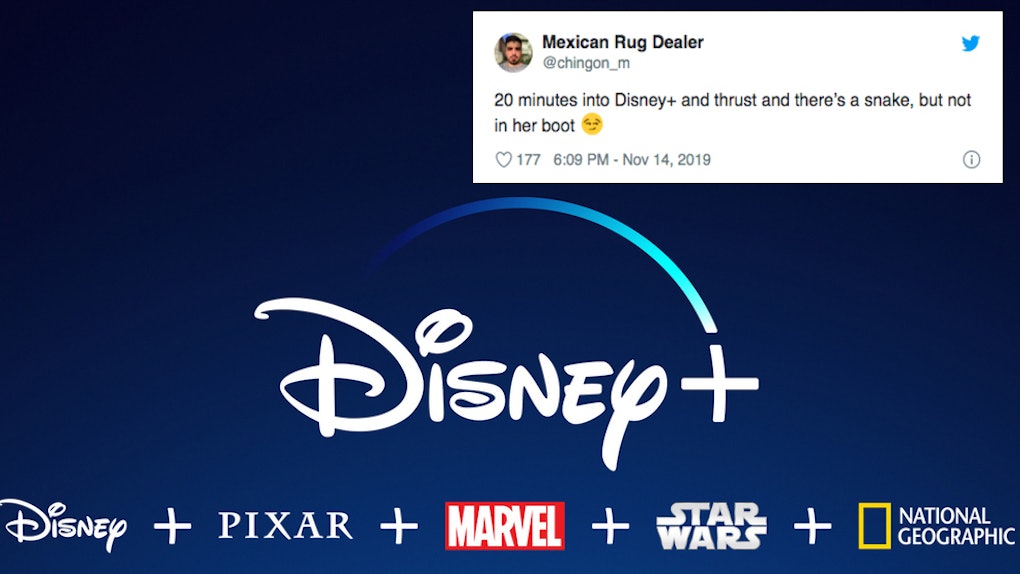 11 Tweets About "Disney+ & Thrust" That Will Ruin Your Innocence

It's unclear who coined the phrase, but sometime around the end of October, "Netflix and chill" was replaced, and a new way to stream and cream was born. Now that Disney+ has officially launched, "Disney+ and thrust" is the latest viral craze because, unfortunately, my "Mickey and quickie" suggestion didn't catch on. And as much as I'd prefer my DCOMs to remain far away from any diddling, I've got to admit that these tweets about "Disney+ and thrust" are truly genius... even if they've destroyed my childhood a bit.

When you ask someone to "Netflix and chill" or "Hulu and hang," you're saying, "I'm asking you to hook up, but I'm doing so discreetly." When you ask someone to "Disney+ and thrust," you're saying, "Do me while my fave childhood cartoons play in the background." It makes sense — if you're paying $69.99 a year for your subscription (that is actually what it costs, believe it or not), you don't want to waste any time beating around the bush, when that time could be better spent... well, you know. If all the Disney+ content hasn't already convinced you to subscribe, then maybe these "Disney+ and thrust" tweets will.

If they ask you to "Hulu and hang," they're too old for you, bro.

Out With The Old, (Get It) In With The New

Watching Disney content with your SO has never been sexier.

Before You Get To Thrust, You Must Earn The Trust

I trusted you, Disney+. We all trusted you. And look what you've let Twitter do to you.

Or Better Yet, Just Hush

Don't Mess With "A Dream Is A Wish Your Heart Makes"

Listen, fella. Back off when it's time for Cinderella.

But Are There Any Toys Involved?

I guess that's what happens when you pull Woody's cord the right way.

And maybe even a sex move I'd like to try.

Is 'None Of The Above' An Option?

How about "Amazon Prime and slime"? Sorry, is that too much?

I Don't Think Raven Imagined The Future Of Disney+ Like This

🎶 I try to save the situation, then I end up misbehaving 🎶

When You're In The Mood For A Mick— Er, A Quickie

Welp, now I'm going to be seeing this face in my nightmares. Thanks a lot, Twitter.

Streaming TV and hooking up is a combination that will never go out of style, and I have a feeling that 2020 is going to be all about the "Disney+ and thrust." Guess it's time to subscribe.