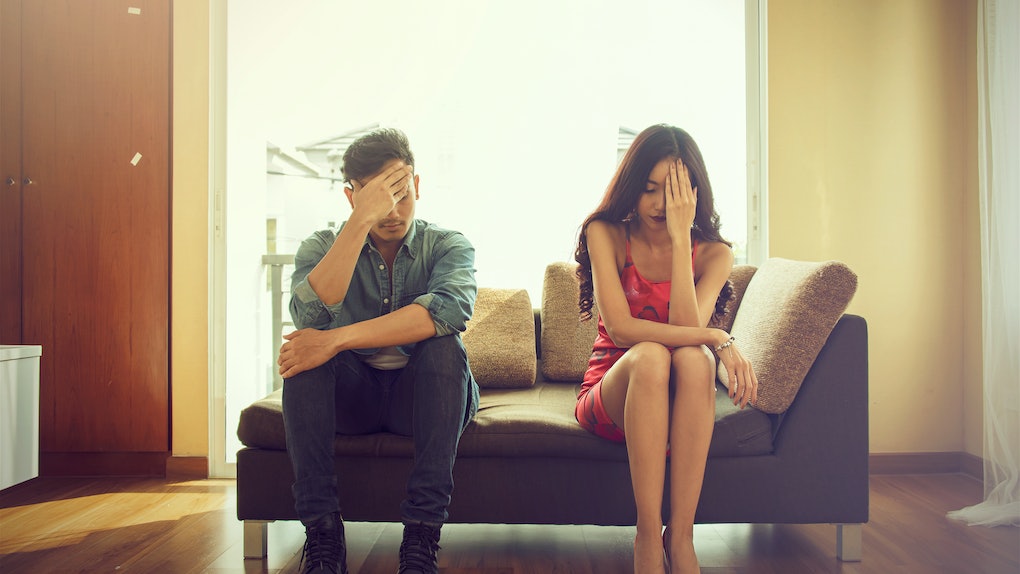 Sometimes, you might end up kissing a couple of frogs before you meet your prince, princess, or genderless monarch. And while tales of heartache can be hard to hear, these stories about dating emotionally unavailable people are actually super enlightening. When you really like someone, and they seem to be a little distant, it's totally natural to wonder what you're doing wrong. While every relationship is different, if you're dating someone that's kind of reserved, that may be a them-issue. In any relationship, it's always OK to ensure your needs are being met — don't let anyone tell you otherwise.

Perhaps your date doesn't seem to be on your emotional wavelength. If this is the case, you never need to feel bad about asking for more from the person you're dating. Perhaps you have your own history of falling for emotionally distant people, or you've helped your bestie or sister through some hopelessly detached hookups. At the end of the day, listening to other people who have shared similar experiences can be everything from helpful to healing.

Elite Daily talked with 10 people about their relationships with emotionally unavailable partners, and what they had to say is super emotional.

1. They weren't going to change.

This spring I was dating someone for about four months, and I thought we were on the same page about getting more serious, but then he started to really pull away. When I asked him why he seemed distant, he told me he couldn't be my boyfriend. It was really hard for me to understand that he was emotionally unavailable and wasn't going to change, no matter how much I liked him.

I have a marked tendency to go for guys who don't like me 'that way. I tend to subconsciously go for the ones who aren't literally available or interested somehow. I try to force myself to think about how these guys aren't into me and when I'm more aware of the reality that we'll never really be together, it burns a bit and then they seem less attractive. But sometimes, it's still really tough to make feelings go away.

3. I was forcing a relationship.

I spent most of my twenties trying to force relationships out of things that should have ended after a couple of dates. I felt that if a relationship wasn't going well, it wasn't because I had picked the wrong person, it was because I wasn't trying hard enough to fix it. I am currently in a healthy relationship with my S.O. of almost three years. At the time we met, I had cut off all the jerks I was still in contact with and decided to just date and be open to the possibility of meeting someone different. Because we're both quite introverted, the progression of the relationship was much slower. I think I really needed that. It gave me time to consider whether I actually liked him and wanted to keep moving forward.

I tried to date a couple times after my last bad breakup and realized very early on I was still picking men who were emotionally distant and very full of themselves. So I've stopped picking anyone. Until I fix my relationship picking skills, I won't be trying on any new romantic relationships. That might equate to singlehood for a while. But, hey, now that I'm single I'm happier and much more relaxed. I think taking a breather to address some changes to your own patterns is smart thing to do.

5. I had never actually asked what my needs are.

I just got out of a year long relationship and afterward realized that I had only ever chosen guys who were either emotionally unavailable/never actually be able to truly get to know me and satisfy my needs. It was a crazy realization because I've always thought of myself as an empathetic emotionally responsive person, but I realized that I had never actually asked myself or thought much about what my needs were. The place that I've come to is that I need to focus on learning to identify and satisfy my own emotional needs.

6. There was an invisible wall that I couldn’t get through.

There was this one guy I was hooking up with for a while (slash still am because hookups are fun) who had just gotten out of a relationship. Anytime we hung out it would be great and there were times when banter would be next level, but I just couldn’t ever get past it with him! Like, there was this invisible wall, and no matter how hard I tried, I couldn’t get through! It was really stressful cause I started to put stuff on myself and look for reasons why I couldn’t get through to him when in reality, he wouldn’t let anyone in!

7. She wasn't ready to open up to someone.

I dated someone for about six months, and she seemed very emotionally available at first, but gradually as I got to know her, she slowly cut me off and pulled away. In the end, she told me she regretted opening up to me in the first place and that she wasn't ready to be in a relationship or open up to someone. It was super painful to hear, but it helped me move on.

8. It was exhausting never knowing if he was going to cancel.

I dated someone would constantly cancel dates an hour before we were supposed to meet, saying he had to see his family or do something else he had planned. Clearly, if he had cared at all about our plans, he wouldn't have told other people he'd do other things with them at the same time. Or he was just lying to me and trying to use his plans with other people as an excuse. Honestly, it doesn't matter anymore. He wasn't ready to let me into his life. For the time we were together, it was exhausting never knowing if a date that we scheduled was going to happen or not and planning my days around things that may get canceled.

9. He was too immature to talk to me.

In college, I dated this guy, and I really liked him. I was enjoying just dating, but I guess he was nervous that I was thinking we were going to be together forever or something? Honestly, he was too immature to know how to resolve that in his mind or talk to me about it. He just defaulted to this weird distant stance for a while. Eventually, I had enough and called it quits.

10. They weren't ready to be in a relationship.

Last winter, I was hooking up with someone for a while. I had met all of their friends, and I really thought it was going well. When I asked them to meet some of my friends, they said they didn't even know how they felt about me and thought it was "too soon." I was so sad for a while, but then I realized that they weren't ready or interested in being in a real relationship.

Dating someone emotionally unavailable can be super emotionally draining. Though every relationship is different, you deserve someone that's really ready (and excited!) to be with you. Being open and honest with someone is an important step in forming a healthy relationship. Remember: being emotionally vulnerable isn't always easy, but it can be worth it.