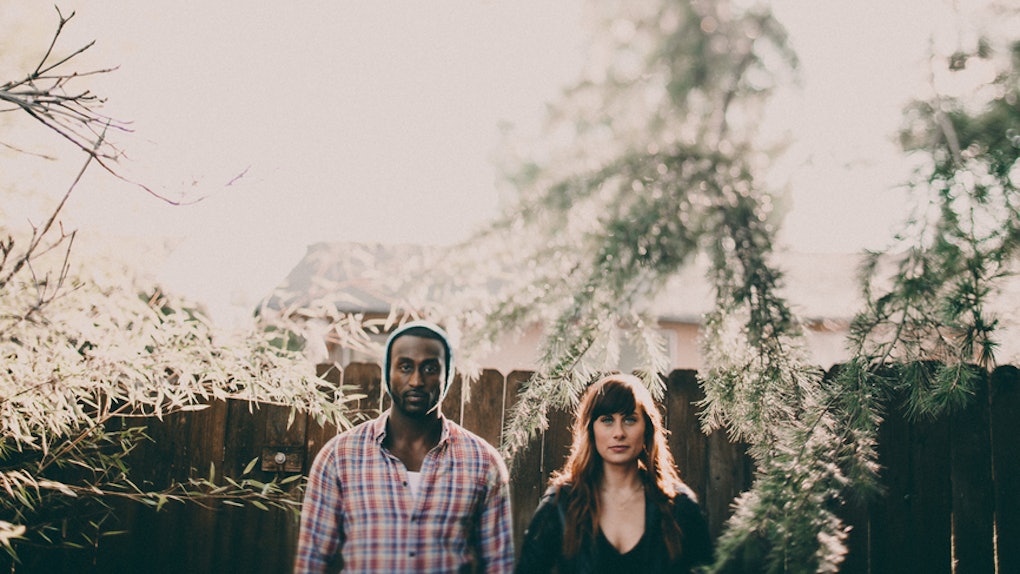 Anyone who's ever dated someone outside of their ethnic group will probably tell you that being one half of an interracial couple isn't always easy. Sadly, simply loving someone of a different race can often bring upon tons of scrutiny and shocking assumptions by complete strangers. Rude things interracial couples have heard can range from racially charged "observations" to outright hate speech. It can be easy to dismiss this harassment as something that used to happen back in the day. However, as someone who is currently in an interracial relationship, I can confirm that this isn't the case.

Growing up, may of us were taught to deal with verbal harassments with a "sticks and stones may break my bones but words will never hurt me" mentality, but the truth is that words are extremely powerful, and I think we can all agree that they definitely have the power to belittle, trivialize, and hurt others. And while there are, no doubt, interracial couples who haven't experienced discrimination, according to countless anecdotes, (here, here, and here) prejudice is alive and well. Being aware that discrimination is still happening is the first step to helping everyone understand that making assumptions about a couple based on their differing cultural heritages is something that has no place in modern society.

1. Assuming You Having Something Against Your Own Culture

It's pretty normal for a white guy to be with a Latina. Less common for white women to be with a Mexican dude. I've also been asked by a waitress why I don't like Mexicanas, in Spanish, in front of my wife.

2. Assuming That You're Doing Your Partner A Favor

White girl dating an Asian guy. Fellow white females will sometimes imply that I'm charitable in some way by dating an Asian guy, as though I'm doing him a favor. Like "oh, I'm not into Asian guys, but that's so nice that you are." It infuriates me.

I'm a white woman and my boyfriend is an Arab Muslim. We live in a very conservative state, and thus attract a bit of curiosity and sometimes, animosity. I've had white men (and women, but far less frequently) ask me if he forces me to dress conservatively or ask if he's controlling, abusive, etc. A lot of assumptions are made by random strangers on that front. A lot of Arab men assume that he's with me because American girls are slutty (according to them), that our relationship is just a phase and he'll "marry proper" eventually. Like he's dating me as an act of rebellion or some shit, even though we've been together for more than three years. Also, many people have made errant comments about how I must be with him for his money, because "Arabs are rich." Idk, where I live, interracial relationships are not particularly common and people are generally more ignorant and racist than in other states I've lived in.

4. Assuming Your Partner Is A Terrorist

I'm a white woman who dated a black Muslim man for several years.

There were a number of hurtful comments directed towards us but what stings the most are comments that weren't INTENDED to be malicious, but were. So few people realize how prevelant racism is in our society. For example, a guy once made a stupid joke that my boyfriend was going to leave me to join ISIS. It was so outrageous that I just laughed at how dumb it was. It didn't bother me. However, what does bother me is a conversation I had with a close girl friend at the beginning of my relationship. I was telling her how excited I was to be dating this guy, raving about how cute he was etc and he just interrupts and says "I don't know, black guys just aren't my type but I'm glad you like him."

5. Assuming All Kinds Of Ridiculous Things

I've had multiple white women tell me to "stop stealing" their men. People often think I'm a mail order bride or that I'm only with my boyfriend for PR. I've had plenty of white men tell my boyfriend to "be careful" because "all Asians are goldiggers" and "Asians are the sluttiest". Men have asked my boyfriend to share me around because "what's the point of having an Asian if you won't share? They love that shit". People constantly doubt my motives. I've literally had a stranger tell me I don't deserve a white man. The list goes on.

6. Assuming Things About Your Culture

I'm Chinese, my SO is white. It's ranged from people glaring at us, to accusing my SO of having "yellow fever"/Oriental fetish, and worst of all, endless ignorance from my SO's mother. The stuff she says and does is like cringe comedy level of embarassing. "Why do you know origami? Are you Japanese, too?" "Stay for dinner! I'll make you your food." [proceeds to make packaged fried rice and broccoli beef]

7. Assuming That Your Biracial Children Will Suffer

I'm brasilian who has been in a relationship with a black/Puerto rican man. When I first mentioned to my mom that I met someone, she immediately asked "What is he?" I told her and she said "WHY?! Do you want your children to suffer with nappy hair?" Once they met him in person, they were semi-relieved because he had light skin and a narrow, pointy nose.

8. Assuming You Have A Fetish

People sometimes ask me if I'm dating my SO because I have a "fetish for Asians" or because it's "cool to have an Asian girlfriend". I'm pretty sure that's not a regular question to ask couples lol.

I'm Pakistani, and my ex was a true blue Aussie white boy. One time I had henna done for Eid and his dad said it looked like someone had shit on my hand. Old mate ex laughed along, thinking it was a simple joke. But it was pretty offensive - he would often be unaware of things that were offensive, would make fun of words in my language, etc. It was pretty annoying. Please don't be clueless about your SO's culture!

10. Assuming That You're Doing Something Wrong

One night me and her stopped at a gas station, I guess a little after I left to go get the snacks and stuff a cop walked up to the car and started asking my girlfriend if she was the get away car and where she was from. I walk out (nerdy white guy wearing glasses and all) carrying chips and energy drinks. He just asked me how my night was going and left. My girlfriend was a little shaken but then we just drove off.

Despite the difficulties many interracial couples have faced, it's important to remain optimistic that things will continue to improve. Love is something that has nothing to do with race, and the next time you hear someone making racially-based assumptions, consider saying something. Remaining silent is part of what allows these types of offensive things to continue permeating society, and y'all... it's 2018.