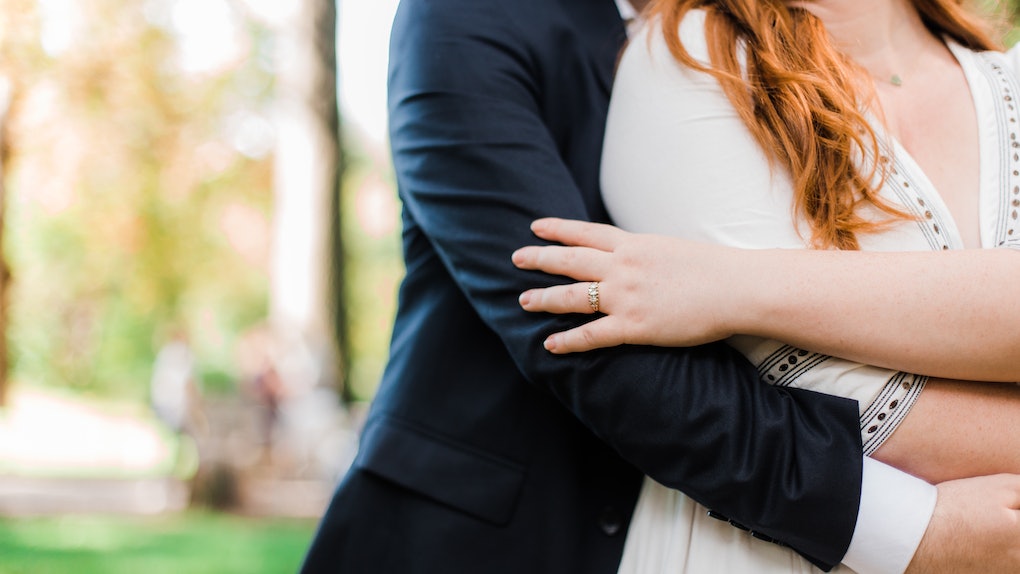 If you're anything like me, you've played out your dream engagement in your head a number of times. Your charming beau gets down on their knee and declares their love to you, and then you get thousands of likes on Instagram when you post about it. Not all proposal horror stories are quite like the fairy tales, though — sometimes your perfect partner pops the question in a cringeworthy way. Of course, that doesn't mean the proposal isn't magical or amazing, it just means you now have a hilarious story to share with your friends for years to come.

Have you ever worried that your partner will pop the question when you're just about to get a bloody nose? Or you'll find an engagement ring in an ice cube and then choke on it? Or, worst of all, the person photographing the engagement will be standing on your bad side (OK, this fear might just be mine, but honestly, my left side is way better than my right). You'd be surprised how crazy some true engagement stories can be — they're better than anything we could dream up in our heads.

Read on to hear real engagement ring stories that will make you laugh, cry, and cringe.

I dressed up as a ghost when I proposed, but I didn’t see the whole thing because I had cut the eyeholes very unrealistically. I then used one as a mouth hole to explain myself, so it all worked out.

Nude And In Love

My husband and I were on a nude beach in Zipolite, Mexico, (I had my bathing suit on, he didn’t.) He had me swim towards the rocks to be romantic, but I almost drowned in the riptides. I found out later that many have been rescued there, and the beach name translates to 'Beach of the Dead.' He proposed that night, still naked. I was so mad but said yes.

I stared at my wife and asked if this was really happening and if she was serious.

I was sick and leaking from every orifice but my partner has zero patience and couldn't wait until I felt better for a nice night out. So he proposed amidst piles of dirty laundry rife with bodily fluids, and I mumbled my answer (as well as a slew of curse words) into a tissue. Suck it, Nicholas Sparks. WHO'S ROMANTIC NOW?!

I had to take my fiancé to the ER an hour after he proposed because he passed out after proposing (he hadn’t eaten all day).

I thought someone had broken into my apartment, and I was terrified when my boyfriend jumped out of my bedroom.

Love By The Side Of The Road

I had proposed to Nicole a couple of times and she had said no. Then one day when we were driving from Santa Cruz back to Seattle. We were passing through Mount Shasta and our car broke down. We waved down several cars but nobody would give us a ride. We didn’t have cell phones at the time, even though most people did. Finally, somebody called a tow truck for us. We stayed that night at a weird motel where the owner refused to give us a room at first because I was wearing an Obama T-shirt. He was running for president at the time. After begging him to let us go to bed, he finally gave us his worst room. The next morning, we sat by the side of the road for hours while the only repair shop in town worked on our car. Out of nowhere, Nicole got down on one knee and pulled a ring out of her pocket. We were both utterly exhausted and I remember barely being able to muster a gasp. She slipped the ring on my finger and it was so large, I started referring to it as a bracelet. The ring would not stay on any finger. In retrospect, this might’ve been a metaphor. I had always dreamed of a romantic proposal. With me on one knee. But what I got [was] a ring that didn’t fit, broken down by the side of the road, and I think I even remember crying.

I got food poisoning and pooped my pants after 30 minutes after I proposed.

A Ring Is Clothing Enough

We were lying in bed, both naked, and he said, 'when I propose to you do you want to be naked or fully clothed?' And before I could answer, he goes, 'well, you're gonna be naked,' and he reached under the bed and pulled out a ring and kneeled (yes, naked) and asked me. I said yes. I had no idea that every single family member was going to ask, 'how did he propose?!' I wouldn't be able to tell them the truth. I waited like a year after the wedding to tell my mom the full story.

My fiance sent me a calendar invite for the proposal date. I should add that the cal invite is more a reflection of how well he knows me. Like, I secretly loved being able to plan around it.

Maybe your perfect partner pops the question at an inopportune time. You know the feeling of being asked something with food in your mouths, and you know you can overcome it. So, if your engagement doesn't live up to your wildest fantasies, just know that you are not alone, and revisit these stories anytime you need a laugh!