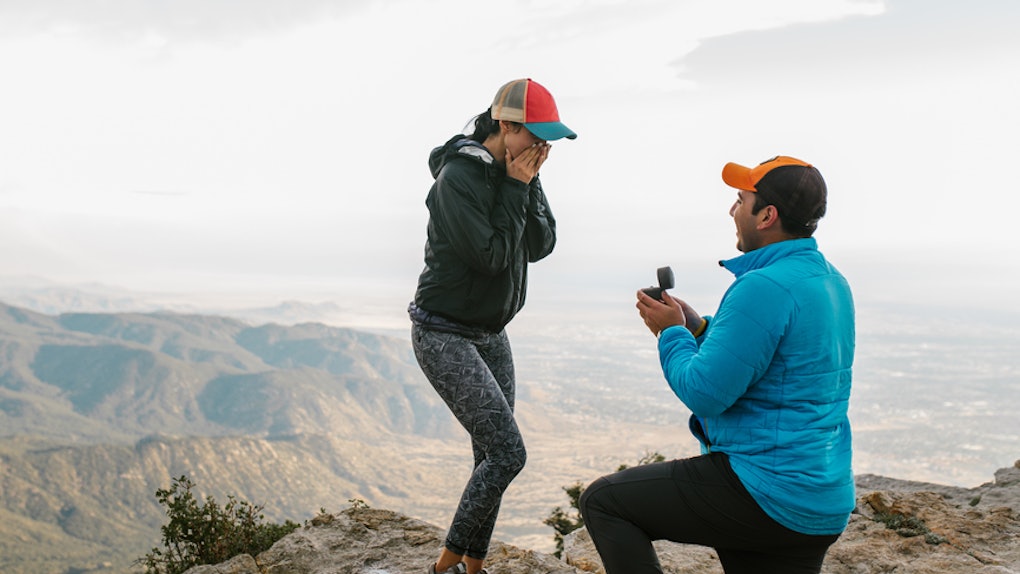 There are a few adjectives people use to describe proposal stories that tend to be a bit more common than the rest. You know what I mean. How many times have you heard someone describe their marriage proposal as "magical" or "romantic" or — my personal favorite — "perfect"? Frankly, I'm sick of it. WE GET IT. Your proposal was amazing. I'd like something a little different. And this Reddit AskWomen thread where ladies shared their awkward proposal stories is exactly the breath of fresh air that I've been looking for.

Read along and read these stories that weren't magical, romantic or perfect. They're just plain awkward and that's totally fine.

This couple's drunken decision turned into a sober action.

We were in Vegas for a fun trip about 9 months after we met. Drunk me said, “We should probably get married while we’re here, eh?” Drunk him said, "Yeah!"

Woke up in the morning and avoided eye contact for a while, took in the shark show at the Mandalay Bay. On our way back to our hotel, he just bursts out, "Well are we getting married today or not?"

They made the decision at a casual dinner.

We went out to a normal dinner, on a normal night, after I had come home from work. We were waiting for our food, and he said, "I’m not sure why, but I REALLY missed you today." And then he went on to say he never stops thinking of me and he hates calling me his gf, and would I ever consider being his wife... I said that I would marry him in a heart beat. And that was it, we sat there and stared at each other for a few minutes and said, "so.. now what we do?".

So we told our parents and a few friends and we were married 3 weeks later. No ring, no big surprise. Just a normal conversation at a normal dinner, that changed our lives.

The decision was made while she was in the bathroom.

I was in the bathroom (inside our room) and my now husband came by. I was reading about marriage advice and thought it would be cool to get married. I asked him if he wanted to get married next year, and he said it sounded good to him and we should pick a date. We were originally going to elope but decided to have a wedding instead. Called my parents that night to tell them (but left out the details). No grandiose thing, literally me peeing and having the thought on a whim. I have a made up story I tell people when they ask because the actual story is kind of shameful, lol.

He didn't just ask her, he "screamed" the question at her.

My husband screamed the proposal at me. He is deathly afraid of heights and thought it would be a good idea to face his fears and propose at the top of a lookout tower. When we got to the top I was very proud of him and tried to give him a hug but he wanted to get on his knee to propose and hurry back down. I obviously was confused and he couldn't move and the nervousness of the proposal and being up high freaked him out and he screamed at me while showing the ring.... I asked him to try proposing later that day at a more neutral location. Still married 6 years later lol.

He popped the question while she was defrosting a chicken.

He had carried around the ring for a week waiting to do a nice hike and propose then, but couldn't stand hiding it anymore and proposed in the kitchen ...while I was defrosting chicken breasts..so romantic lol. I still almost passed out from excitement and happiness so it was romantic to me

Their joke turned into reality.

We had been teasing each other for weeks about wanting to marry one another. He brings it up one night and I said "I'd marry you tomorrow." He said "I have to work tomorrow, how about the next day?"

For real? I spent the next day getting ready, trying on dresses, buying rings and everything while he was at work and the following day, we headed up to Gatlinburg and eloped in a tiny chapel just the two of us. Couldn't have been any more perfect.

He was acting so weird leading up to it that she thought he was cheating.

My bf at the time was being super fishy, like avoiding me, sweating, nervous looking, and kept going upstairs. I thought he was either on drugs or cheating on me. I followed him upstairs to our bedroom and as I opened the door he jumped out of his skin and dropped his phone, so I accused him of hiding something and cheating on me. At which point he said he was trying to wait until midnight but he guessed he had to do this now and got down on one knee. He gave me a lovely speech that I couldn’t even take in because I was so confused and shocked and eventually I said yes.

Her pants weren't even fully on when he popped the question.

There's a little more to it than this but the TL:DR version is this:

We came home from dinner and I went into the spare room (aka my walk in closet) to change out of my work/office clothes to sweatpants. As I walked out of my room, still pulling up my pants, he was stereotypically down on his knee with the ring in his hands. In other words, he literally caught me with my pants down. So I had to say yes.

They decided to spend the rest of their lives together mid-sex.

He proposed in bed. During sex. Terrible proposal, but we've been married for almost 18 years, so.....

An argument turned into their proposal.

I felt he was taking FOREVER (plus I knew he had the ring), so after an argument on the 4th of July I brought it up. He then just walked to the trunk of his car grabbed the ring box and asked me. All of our monumental things in life go like this, engagement, wedding, finding out I'm pregnant, all the biggies. But hey we've been together for 12 years and married 8, we clearly love each other.

They gave their love a green light while stopped at a red light.

He asked me in the car at a red light.

OK, I know I said these stories weren't going to be magical, romantic or perfect...but I have to say I really think these stories were pretty awesome in their own way. Who wants rose petals and fireworks when you can have spontaneity and simplicity?

More like this
Prince William's Rumored 10-Year Anniversary Gift For Kate Middleton Is So Extra
By Corinne Sullivan
Is Katie Thurston Engaged After 'The Bachelorette'? Her Instagram Is Sus
By Joyann Jeffrey
Are Clare Crawley & Dale Moss Engaged Again? This Update Has Fans Convinced
By Candice Jalili
Stay up to date