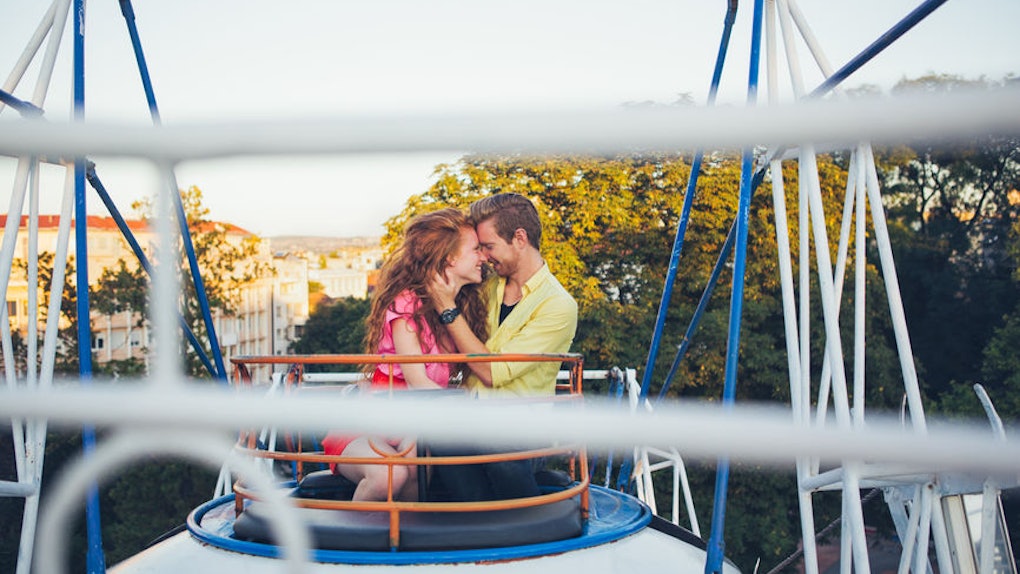 5 Valentine's Day Proposal Stories That Are Straight Out Of Hollywood

When it comes to choosing the perfect day to propose, many choose Valentine’s Day. And why shouldn’t they? It just so happens to be a day all about expressing and celebrating love. So, it goes without saying that Valentine's Day proposal stories tend to be about as sweep-you-off-your-feet romantic as it gets.

And as it turns out, this holiday is pretty popular for engagements. In fact, one 2017 study by jewelry retailer James Allen revealed that 43 percent of millennials say it’s their ideal to propose or be proposed to. Meanwhile, an Ebates and Propeller Insights study found that a whopping 48 percent of Americans believe a Valentine's Day proposal is actually romantic as opposed to cheesy.

That said, popping the question on Feb. 14 requires some serious effort in order to ensure it’s cute rather than corny (we've all seen the engagement announcements involving a ring hidden in a box of chocolates). Ultimately, the Valentine’s Day proposal stories that make our hearts go pitter patter are the ones that have personal significance, thoughtful details, and of course, an element of surprise.

Whether you’re looking for some proposal ideas and inspiration or just die for a good engagement story, read on for some real-life, romantic tales of how five people popped the question on Feb. 14.

We worked in the same restaurant (that’s how we met), and I really wanted the proposal to be a total surprise. One day, we were both in the middle of a shift — I was in the kitchen, where I served as sous chef, and she was managing the floor. It was just starting to calm down in there because the Valentine’s Day dinner rush hadn’t started, so it wasn’t too chaotic yet. I had one of the servers tell her that it was someone’s birthday, and ask her to help get the cake from the kitchen.

As she was bringing the cake out, she noticed that it said, “MARRY ME, KATE” and started freaking out. She put the cake down on the bar and when she turned around, I was kneeling down on the floor to pop the question. Customers actually got up and applauded after she said “yes,” it was like something out of a movie.

We’ve been married for two years, and she still says the proposal was completely unexpected.

A Match Made In Real Estate Heaven

We had been talking about moving in together for months and were finally looking at some apartments together. It wasn’t exactly how I planned on spending my Valentine’s Day, but he told me it was the only day the realtor was available for showings. Based on the photos we’d seen, there was one place, in particular, we had our heart set on — it had an adorable breakfast nook, a fireplace, and even access to a roof deck with a stellar view of the city.

After touring the place, we both had this moment where we looked at each other and knew that this was our apartment. I told him, “this is the one.” And with that, he said, “you’re the one” and pulled out a ring. We signed the lease three days later, toasted with champagne on our new roof deck three months later, and we’re getting married in June.

Breakfast With A Side Of Wedding Bells

We had a dinner reservation at a new restaurant we’d been dying to try, but I was pretty much just planning on hanging around in my PJs until it was time to start getting ready. When I woke up, there was a trail of rose petals leading from our bedroom into the kitchen. There, on the counter, was a tray with champagne and orange juice, and a note: “Hope you’re hungry.”

I followed another trail of petals out to outside, where he was waiting with an enormous brunch spread he had made for us. During the warmer months, we love eating out on that porch as much as possible. As I sat down to eat with him, he turned to me and said, “I want to start every day with you for the rest of my life. Does that sound good to you?” I nodded, and he slipped the ring on my finger.

The best part was that he had planned out a bunch of romantic activities for us leading up to dinner, so we got to celebrate our engagement for the rest of the day and night.

True Love In A Time Of Tragedy

I had planned out an elaborate proposal for her on Valentine's Day, but she had to leave town unexpectedly due to a family emergency the day before. I knew I could wait until she got back and reschedule my plans, but I also missed the hell out of her, and she sounded like she was really struggling. I realized I didn’t want her to be alone, so I called out of work, packed a bag, and hopped on a flight to her hometown in Texas.

I called the hotel and asked them to notify her that a special package would be waiting for her in the lobby at 4 p.m. When she came downstairs, I was waiting there. She was visibly shocked to see me and came running into my arms. “I couldn’t stand the idea of being apart on Valentine's Day,” I told her, “and I want to make sure we never have to.” I asked her to marry me in front of all the hotel staff, and thank god, she said yes.

Music played a big part in our relationship. It’s what we bonded over on our first date, and it’s also what brought us together in the first place. So, for Valentine’s Day, I decided to make her a good old-fashioned mix tape (technically, a CD). Every song on it was somehow meaningful to our relationship. The first song was by the band we saw for our first concert together, the second song was by a singer-songwriter we discovered together, etc. I gave it to her after we got home from spending the afternoon together, and suggested she put it on in the background while we cooked dinner.

At the very end of the mixtape was a secret track: It was a song I wrote for her, and once it was over, there was a recording of me asking her to spend the rest of my life with her. She was so floored she had to sit down. I knelt next to her and asked her again, and she said, with no hesitation, “definitely.”

See? Valentine’s Day proposals don’t have to be corny or cliché in the slightest. These engagements prove that a little thought regarding what makes your relationship special goes a long way when it comes to asking someone to spend the rest of their life with you. By incorporating certain details that pertain to your unique bond, you show that you know them better than anyone else in the world. I’m not crying, you’re crying. (OK… maybe that makes two of us.)