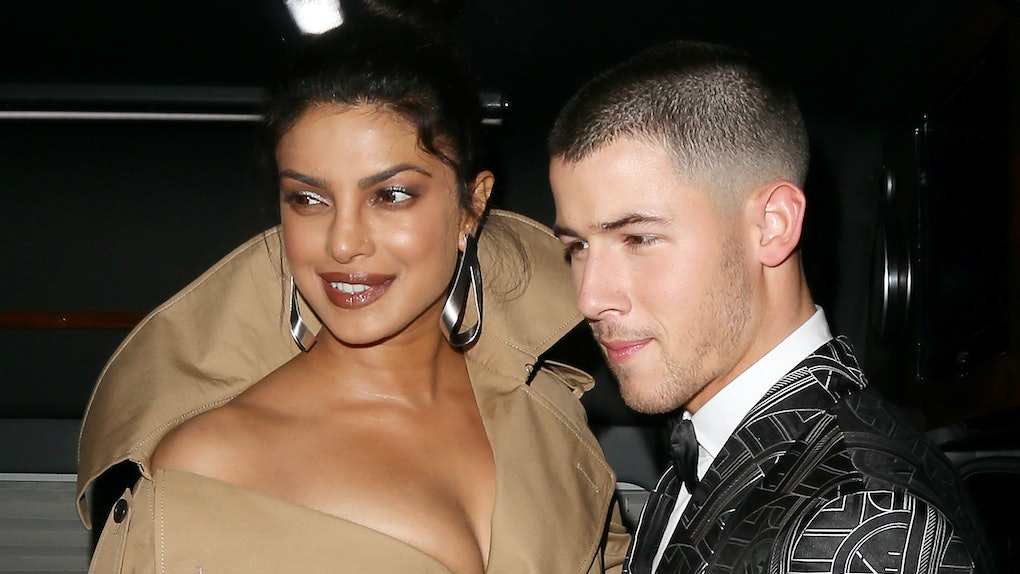 It's OK to get jealous, because Priyanka Chopra is reportedly dating pop star Nick Jonas. Up until now, the 35-year-old Indian actress, philanthropist, and former Miss World titleholder has kept her love life very private. While neither have confirmed their rumored relationship, they aren't exactly staying out of the public eye. Luckily, I was able to dig up some of Priyanka Chopra's quotes about love. I hope Nick Jonas is reading this — and not just for selfish reasons. Chopra's thoughts on love, marriage, and kids might just give the 25-year-old former boy band member something to think about.

When asked about her views on romance, the Quantico star definitely has some strong opinions, but she isn't one to name names. It's been said that a picture is worth a thousand words, however, and photos of Chopra and Jonas seem to be popping up all over the Internet. The two were spotted together at the Hollywood Bowl, at Dodgers Stadium, in JFK Airport, and even snuggled up on a boat. If they hope to keep this whirlwind romance afloat, though, they'd better get on the same page when it comes to the future. Here are 10 things Priyanka Chopra has said about love and relationships that Nick Jonas might want to pay close attention to.

On wanting to be wooed:

I like to be given attention, not like creeper-worthy attention, that would freak me out. But I like to be pursued and wooed. And if he's not cerebral, if he's not smart and cannot engage me, then it cannot happen. That's the biggest, most important thing for me. I'm very mushy, I love romance.

On looking for love:

I'm not someone who looks for love. I don't believe in making it happen. My life has been shaped by so many serendipitous moments so far, I feel like, why screw with a good thing?

On what turns her on (and off):

I don't like liars. Honesty is very hot. When you're scared of the truth, it's such a turnoff. I also get upset when people try to 'handle' you or don't give you credit for your intelligence and try to manage you for a desired effect. I don't like games, at work or at play.

On marriage and children:

Marriage and kids are a big goal for me. I'm a big believer in the institution of marriage and in the family, and in kids, I want to have a lot of them, if God allows. The only problem is, I don't know who I'll do it with.

On where she would like to see herself in 10 years:

In 10 years, I definitely want to have kids. Hopefully earlier than that. I'm very fond of children and I want to do that.

On how many kids she wants:

As many as I can. I love kids. Love, love kids. I prefer their company to the company of adults, actually.

On finding the right person:

I would rather spend my life with the right person than feel pressured and make a mistake.

On being a romantic:

At an early age, I concluded that you'll never know who you really are because you're constantly changing. 'Who am I?' is such an absurd question. Every circumstance or person who comes into your life changes a little piece of you. I'm a bit romantic and philosophical, I guess. I just go with it and make the best of whatever comes my way.

On showing love to other women:

I'm all about girl love. And I have had the most incredible experience working in India. We have celebrated each other's success just as much in India. I make it a point to compliment my colleagues whenever I like their work, wherever I am. As a feminist, I believe women around the world should support each other. We must never be divided and ruled over.

On her love life and whether "all work and no play makes Priyanka a dull girl":

I love playing; I just don't talk about it.

Jonas, whose father is a former ordained minister, has spoken openly about his relationship with God. Chopra seems to share his faith in God. But is Jonas even remotely ready to have kids? While the two would make beautiful babies, they haven't even moved in together yet. Maybe Chopra's mature outlook is just what Jonas needs in a relationship. Only time will tell if these two are meant to be, or if it's just puppy love.