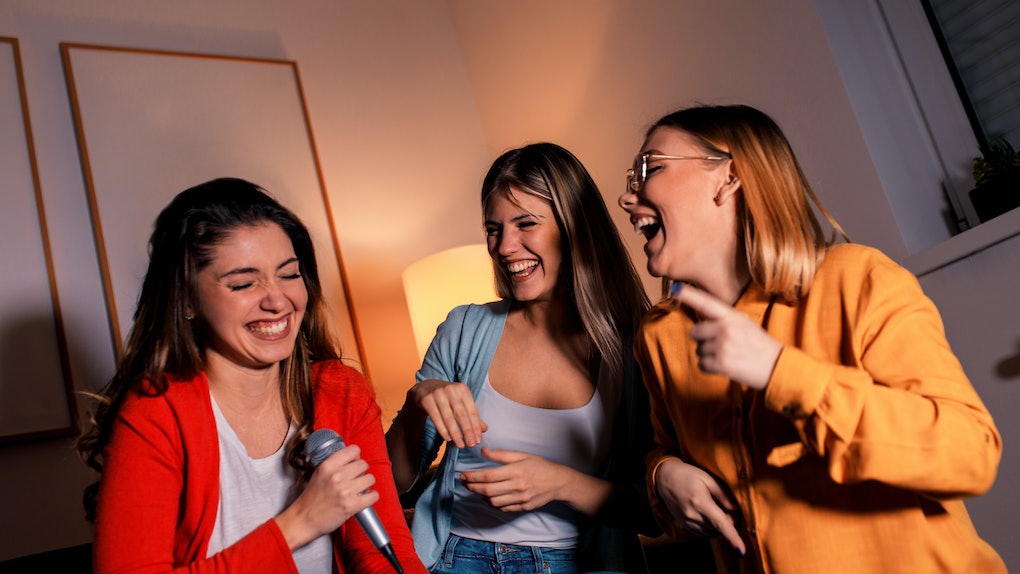 10 Funny Things About Karaoke That Every Millennial Can Relate To, So Get Ready To LOL

Karaoke is always a favorite plan amongst your friend group for Friday night fun. There really is nothing better than renting out a private room just for your crew, or going to a bar that has karaoke where you can sing and dance all night long. You definitely have your go-to karaoke jams, just like everyone else. They can be a hit or miss depending on the mood of your group or the crowd, and that's just one of the funny things about karaoke that every millennial can relate to.

I'm not much of a singer, but I know what songs to pick for karaoke that'll get the room hyped up and singing along in no time. There are some friends who are the pop stars of the group, and can belt out anything like they're performing for the Grammys. Just like there are songs that will get everyone up on the dance floor, and there are songs that'll kind of crush the mood. So when it comes to karaoke, there are hilariously good and downright cringeworthy moments your crew can relate to. Those are the moments you and your friends cherish forever. If you're a karaoke lover, you know these 10 things to be too real every time you go out.

1. When That One Friend Is A Microphone Hog

If you're renting your own room, you'll likely end up with about two microphones. One always goes to the person singing, and the other always ends up in the hands of that one friend who nominates themselves as karaoke MC for the evening. They just become really attached to that second mic, and love singing along to every song and announcing who's up next. (Gotta love 'em, am I right?)

2. When You Realize You Actually Don't Know Certain Lyrics To Popular Songs

Sometimes, you think you know a song, but then the lyrics pop up and you quickly realize you actually don't know them at all. You might have been among the people who thought it was "Starbucks lovers" in Taylor Swift's "Blank Space." (Same.) When you finally see what it's supposed to be, it always makes you laugh like an aha moment.

3. When The Whole Crowd Gets Really Into One Song

There are just some songs that'll get literally everyone singing along, like "I Want To Hold Your Hand" by The Beatles, "Wannabe" by the Spice Girls, and "Bye Bye Bye" by *NSYNC. People can't help it if they want to join in and belt out a great jam.

4. When Someone Picks The Longest Song In The Actual World

There's always that one friend who totally forgets how long a song is, and picks it. They might cringe a bit when that huge instrumental break comes on, and they're just chilling there on stage, waiting. It happens to the best of us.

5. When The Venue Changes Up The Lyrics To Make It More PG

Sometimes, you know a song like the back of your hand. You go to sing it at karaoke, and you realize the lyrics have changed a bit. It happens when they try to make it a little more PG. It may cause you to stumble at first, but the switch-up becomes a new inside joke amongst your friends.

6. When A Friend Doesn't Know How To Read The Room

There's always that one friend who kind of misses the mark when it comes to song choices. Everyone else might pick nostalgic '90s throwbacks, and this person ends up choosing the slowest song in the world that no one has even heard of. It might put a halt in the mood for a minute, but still makes you LOL.

7. When You Wait For Eternity For Your Song To Come Up

You really wanted to pick the perfect song, so it took a while to settle on one. By the time you get your choice in, you have to wait for all of your friends who just picked the first song they saw. That's where you learn to always come in with your karaoke go-to's.

8. When You Didn't Know One Friend Could Sing Really, Really Good

It's always a pleasant surprise when a friend goes up and starts singing like a total pro. You had no idea this friend could sing so well, and they blow you out of the water. Everyone's so excited and shocked, that it feels like a movie moment where you cheer their name after they've finished.

9. When Someone Asks You To Do A Duet You Don't Know

You've been in the situation more times than once where a friend asks you to do a duet, and you say "yes" before even putting thought into it. You just want to be a team player, but it could be a song you've never heard of before. Even though the lyrics are right there, it's very hard to fake it. At least it makes for some laughs.

10. When Your Go-To Songs Aren't In the Book

My favorite karaoke song of all-time is "Wrecking Ball" by Miley Cyrus. They usually have it wherever I go, but there are the rare times when it's not listed. That's when I go into complete panic mode, because I have to pick something else.

You may run into moments when your go-to song is MIA, and you just need to settle on the next best thing. (Seriously though, no "Wrecking Ball?" Come on!)