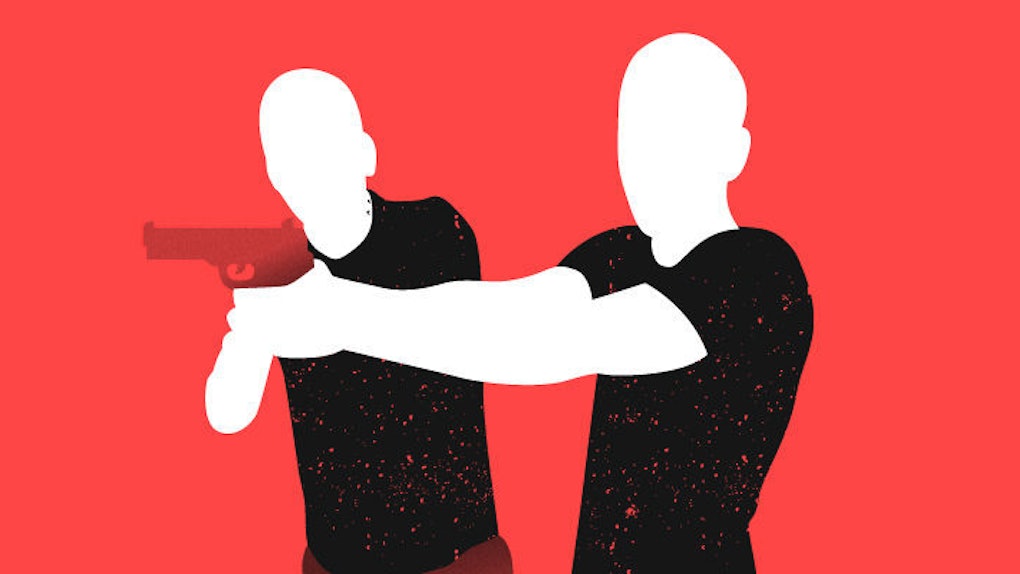 People are jumping up and down. A strobe light flashes. The dance music is seriously bumping.

Then, in a split second, the club atmosphere turns to chaos; bullets sound off as terrorists among the dancers pull out guns. Some people successfully disarm their attackers, but others tragically fail.

No, this isn't news from the latest terrorist attack; it's the most intense and realistic active shooter class you will ever take.

If you don't trust us, trust Raz Chen, one of the instructors at Krav Maga Experts in New York City.

"We try to make it as real as possible," he says, and he's not playing games.

In the sterile training facility, emblazoned with phrases like "Fight the way you train, train the way you fight" on the walls, the experts teach people the basic philosophy of Krav Maga, a self-defense system developed by the Israeli Defense Forces.

From what I could tell when I sat in and observed the active shooter class, taught mainly by three highly-trained, ex-military Israeli men, that philosophy is simple: Do what it takes to survive.

Never stop. There are no rules.

In a life-or-death situation where someone is trying to kill you and those around you, there are no rules -- the stakes are too high. Tsahi Shemesh, the founder and chief instructor of the school, explains:

Losing is a really bad option. It costs too much to lose... A person with a gun is willing to die. You need to love yourself more than [the terrorist] hates you.

The reality is there are many people around the world, including in places like Orlando and San Bernardino, who acted and will continue to act with hatred, which makes self-defense skills like those in Krav Maga a clear "necessity," according to Shemesh.

The class is open to people of all skill levels and ages. The only prerequisites are the desire to learn and the willingness to work hard.

And you'll need to work very hard if you want to safely learn these skills. The instructors teach participants how to seamlessly disarm and counterattack an armed gunman, and also how to quickly control and effectively subdue an attacker.

Aggressiveness is the key.

Based on the leaders' step-by-step instructions and observations from the class, we've compiled some basic Krav Maga tips and created graphics to show you how to disarm an attacker.

But first, we want to make something perfectly clear: We are not Krav Maga certified. Though we consulted with the Krav Maga Experts, these tips and graphics are meant to be taken only as a guide to the techniques.

Also important to note is that these techniques were developed for trained experts. Attempting them could put you at risk of injury, and you should use them only when absolutely necessary.

As Shemesh himself said, "The objective is to get [participants] familiar." So, do yourself a favor and take the class if you can, or keep these lessons in the back of your mind, reserved for an emergency.

With that said, here are a few takeaway points from the Krav Maga Experts active shooter class followed by some instructional graphics showing how to disarm an attacker with a gun.

Regarding a life-threatening situation, Shemesh could not stress this fact enough.

It's one thing if you are facing imminent harm and can isolate the attacker, but otherwise, call the people whose job it is to handle active shooter situations.

If one theme really rang true throughout the class, it was the necessity of aggression. People aren't normally aggressive, Shemesh told Elite Daily, so "it's harder to teach aggression than technique."

Daniel Berco, one of the instructors who led the class, summarized the importance of aggression:

Sometimes, technique fails... but aggression fixes it. If you break [an attacker's] face, nothing's going to happen.

It's harder to teach aggression than technique.

During an exercise where participants learned to control and subdue an attacker when coming from behind, Berco used a loud, commanding voice meant to keep the participants in a heightened mindset. He told the class,

Aggressiveness is the key. When you see a gun, you're scared as hell. Run fast. Take control of the situation. It's not technique... Be aggressive. Catch [your attackers] strong.

Chen simply put it this way:

Never stop. There are no rules. Don't stop until you have [the gun] in your hands.

No matter what you're doing, you have to be fast. Whether it's taking a gun or running for you life, a few seconds can mean all the difference for you or those around you.

You need to learn to switch quickly... and react.

When you run for your life, you have to be first... Don't walk to take a gun. RUN!

Your attackers won't give you the luxury of time and being fast is something that requires no technique.

For that reason, Shemesh explained,

Everything is fast. The class never stops... You need to learn to switch quickly... and react.

Be prepared for anything, pay attention to your surroundings and communicate.

No, this doesn't mean bring your own weapon. It basically means be alert to the situation around you. As one of the instructors said, if you don't have situational awareness, you're dead. Watch what's going on and prepare accordingly.

If you are running, run with your hands up in case you encounter something. When you knock a terrorist down, turn around and check your back for any threats from behind. Whatever you're doing, Berco said,

Finish, turn around, see what's going on behind you.

Communicate and coordinate with others around you if there's a threat. Talk and give relevant warnings. It could even be as simple as shouting, "Gun!"

If you are in an active shooter situation, the last thing you want to do is call attention to yourself as the person trained to handle one.

Don't look like you know what you're doing... create an opportunity by looking afraid and then take advantage of the situation.

Of course, remember the first tip: Don't be a hero. If you can take advantage of a life-or-death situation and save your life, then you have to do it... but if you have a chance to escape or call the police, go those routes instead.

Chen led the portion of the class where participants learned how to disarm an attacker with a gun. A dummy pistol was used for the purposes of the class.

Using observations and notes from the class as well as consulting the experts, we created some step-by-step instructions.

Remember: Do not attempt to use these techniques unless absolutely necessary and consult with the experts if you wish to learn more.

Here are step-by-step instructions on how to disarm an attacker:

You can sign up for classes on the Krav Maga Experts website and learn more about the classes and training they offer.

This particular class cost $49 for members and $79 for non-members, and there's so much more to be learned than what's been outlined here, including how to take down an attacker from behind, how to deal with injured people, how to effectively run through a crowd and how to put all of the techniques together in a simulation, like the one described at the beginning of the article.

If you do attend the class, maybe you'll be able to follow through with the goals emblazoned on the walls:

Disclaimer: These tips and graphics are meant to serve as a guide only and cannot substitute learning from trained Krav Maga experts.