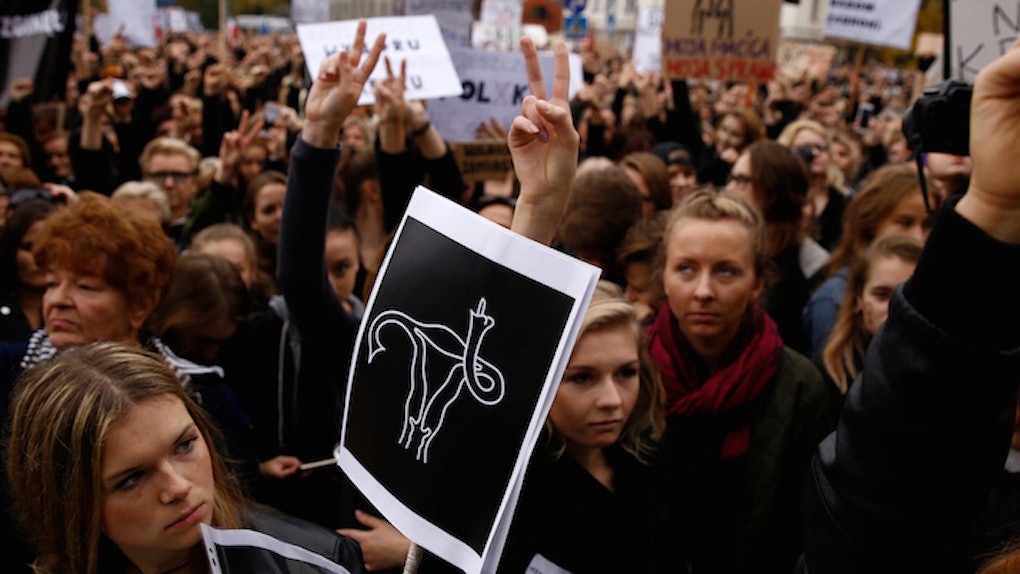 Thousands of women went on strike to protest a proposed strict abortion law in Poland on Monday. But one woman explained the sentiment best.

It's called "Black Monday," or the "Czarny Protest" in Polish. It was modeled after a strike women took in Iceland in 1975, when they refused to work -- including housework and child care -- for a full day in order to demonstrate their power.

This week in Poland, women again went on strike to show their power. And they showed up in massive force.

Protests went on across the country, with demonstrations also occurring in Berlin, Brussels and London.

These women were protesting a proposed law that would essentially ban abortion in the country.

Poland already has very strict abortion laws. The law states that the medical procedure is only allowed in the case of rape, incest or medical threat to the mother's life.

The proposed law would take away even those exceptions. It would punish women by putting them in jail for years for having an abortion. It would also put doctors in jail for assisting with abortions.

Incidentally, these are also proposals that have been made by Republican presidential nominee Donald Trump.

The Polish women put together some awesome signage. Even their official protest signs are amazing:

One woman – who was apparently at the Black Monday demonstration – really stood out. She is an older woman, and she carried a sign printed out and attached to pieces of cardboard.

I can't believe I still have to protest this fucking shit.

Various photos of her circulated around social media. She clearly made an impression on the other demonstrators.

I can't believe I still have to protest this fucking shit.

Women around the world have been protesting for their right to safe and legal abortion for, well, a long ass time.

Women in Ireland are still fighting for these rights, as two women made clear by live-tweeting their trip to the UK to obtain an abortion.

In the United States, abortion was made legal in 1973. But legislators are clever, and they put other laws in place that restrict access.

One of these laws is the Hyde Amendment, which turned 40 last week. This year, the Supreme Court struck down on damaging laws.

The United Nations has said that restricting women's access to abortion is similar to torture. It has called on countries like Ireland to get rid of their laws.

Abortion is an extremely safe procedure. But when access is cut off, things become dangerous.

This woman is still protesting "this fucking shit" to save women's lives.