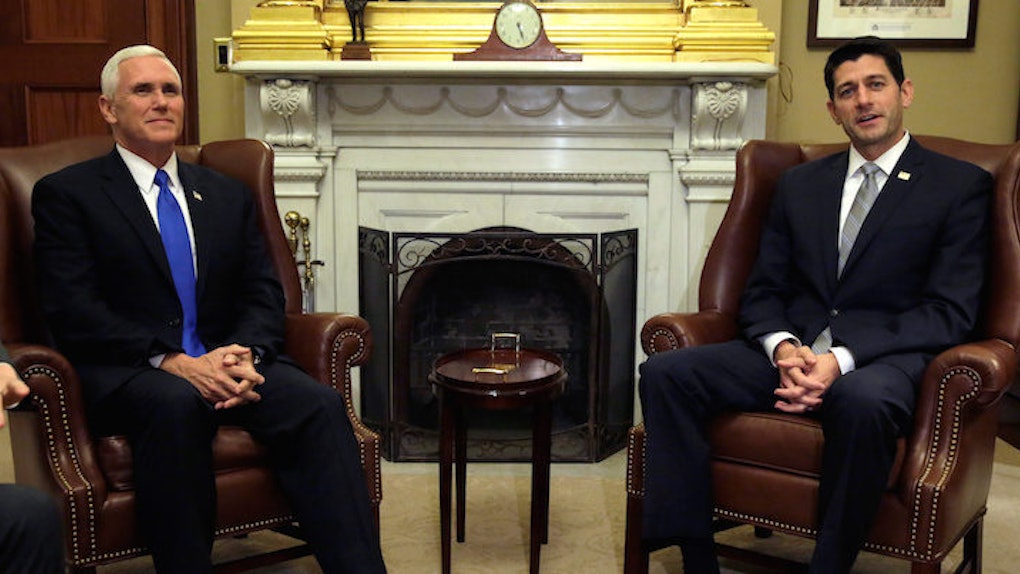 Some of you might be hoping Donald Trump will get impeached or will find the job too difficult-slash-boring and ultimately quit.

But, once you take a look at who's in the presidential line of succession, you might think twice about this.

If Trump quits, gets impeached or passes away prematurely, the above individuals would potentially replace him.

Interestingly, while the secretary of agriculture position is still vacant, all of Trump's potential successors are white men.

Vice President-elect Mike Pence is first in line, a profound homophobe who is also staunchly against reproductive rights, denies climate change, doesn't want to help refugees and loves his guns.

After Pence, we have House Speaker Paul Ryan, a man who once said providing free school lunches to children leaves them with an "empty soul."

If Ryan is unable to serve, the next in line is Senator Orrin Hatch, and who the fuck is that guy anyway?

On a serious note, Hatch is one of the reasons the senate never held confirmation hearings for Obama's SCOTUS nominee, which is why the Supreme Court still has a vacant seat (and Trump gets to fill it).

Putin literally gave this man the "Order of Friendship" award in 2013.

The next in line after Tillerson is Steven Mnuchin, a guy who worked for Goldman Sachs for 17 years and profited off of the housing crisis.

Following Mnuchin is James "Mad Dog" Mattis, a retired general who once said it's "fun to shoot some people" while speaking about the war in Afghanistan.

After Mattis, we have Senator Jeff Sessions.

In 1986, Sessions was nominated for a federal judgeship. His nomination was ultimately rejected after former colleagues testified he used the n-word and once said he thought the KKK was “OK, until he learned they smoked marijuana.”

Following Sessions, we've got Ryan Zinke, who in 2014 said climate change is "not a settled science" (except for the fact that it is settled).

After Zinke, we'd get whoever Trump ends up selecting for secretary of agriculture. As of right now, the president-elect hasn't picked anyone.

If whoever Trump chooses as agriculture secretary is unable to serve, Wilbur Ross would be next in line. Ross is an old friend of Trump's who helped the president-elect save his casino company after it went bankrupt in the 1990s.

Following Ross, we have Andrew Puzder, the CEO of CKE Restaurants – the parent company of Carl's Jr. and Hardee's.

Puzder is not much of a friend to US workers, given he opposes raising the minimum wage. His companies also have a tendency to objectify women in their advertisements.

Finally, we have Congressman Tom Price, the man who wants to completely dismantle Obamacare, which could potentially deprive millions of Americans of healthcare.

Long story short, you might want to reconsider wishing for a scenario in which Trump is no longer president.

His potential replacements aren't much better.