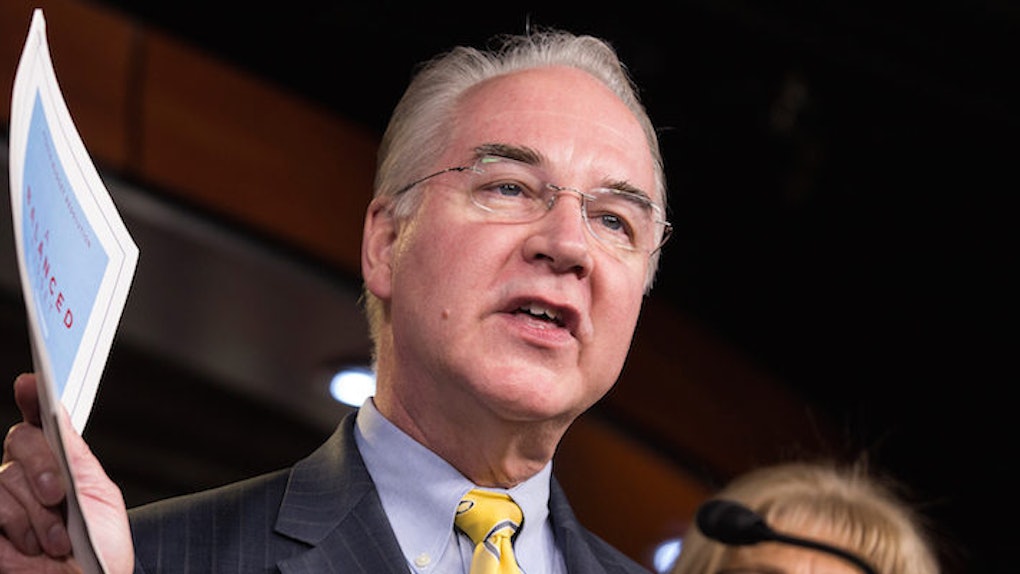 On Tuesday morning, Donald Trump tweeted people who burn the US flag should lose their citizenship or at least face a fine.

Someone might want to inform Trump the Supreme Court decided many years ago flag burning is a form of free speech and protected by the First Amendment to the US Constitution.

Many people are angry about Trump's tweet, given it directly challenges the Constitution.

But they shouldn't let this distract them from the bigger issue: Trump's pick for secretary of health and human services (HHS), Congressman Tom Price.

He's the author of the Empowering Patients First Act, which is the most comprehensive proposal to repeal and replace Obamacare, the New York Times reports.

Chairman Price, a renowned physician, has earned a reputation for being a tireless problem solver and the go-to expert on healthcare policy, making him the ideal choice to serve in this capacity. He is exceptionally qualified to shepherd our commitment to repeal and replace Obamacare and bring affordable and accessible healthcare to every American.

But if Price succeeds in his plans, millions of people could lose healthcare. As Vox's Sarah Kliff explains Price's plan,

It would replace the law with a plan that does more to benefit the young, healthy, and rich — and disadvantages the sick, old, and poor. Price's plan provides significantly less help to those with pre-existing conditions than other Republican proposals, particularly the replacement plan offered by House Speaker Paul Ryan (R-WI). The biggest cut to the poor in Price's plan is the full repeal of the Medicaid expansion, a program that currently covers millions of low-income Americans, which Price replaces with, well, nothing.

Thanks to Obamacare, America's uninsured rate recently hit its lowest level ever.

According to a report released in November by the Centers for Disease Control and Prevention (CDC), the share of Americans without health insurance fell below 9 percent during the first half of this year.

Reports from other organizations, including the Census Bureau, also reveal the large number of Americans who've gained health insurance due to Obamacare.

According to a report from the US Department of Health and Human Services released in March, 20 million previously uninsured Americans have gained health coverage since Obamacare became law in 2010.

Price's plans threaten all of this progress.

Moreover, Price is also vehemently opposed to abortion and has supported legislation to bar federal funds to Planned Parenthood.

Needless to say, Price could have a major impact on the way this country approaches healthcare, but people appear to care more about what Trump said about flag burning.

Whether it's his direct intention or not, Trump seems to be a master at distracting people — especially the mainstream media — with his tweets while he gets up to more controversial activities in the real world.

After Mike Pence was criticized by the cast of "Hamilton," Trump asked them to apologize.

Around the same time Trump tweeted this, he agreed to pay $25 million to Americans he defrauded.

This is a much bigger deal than what he has to say about Pence going to see Hamilton, but people seemed to be more outraged about Trump's tweet.

Trump has a history of tweeting incendiary things.

There's no proof it's part of a grand strategy to distract everyone from bigger controversies.

Either way, people seem to be taking the bait.

If you look at the top trends on Twitter today, the "First Amendment" is trending way above "Tom Price."

If we truly want to hold Trump accountable after he takes the oath of office, we need to keep our eye on the ball and not get distracted by Twitter tantrums.

He can do far more damage in the Oval Office than he can with 140 characters.