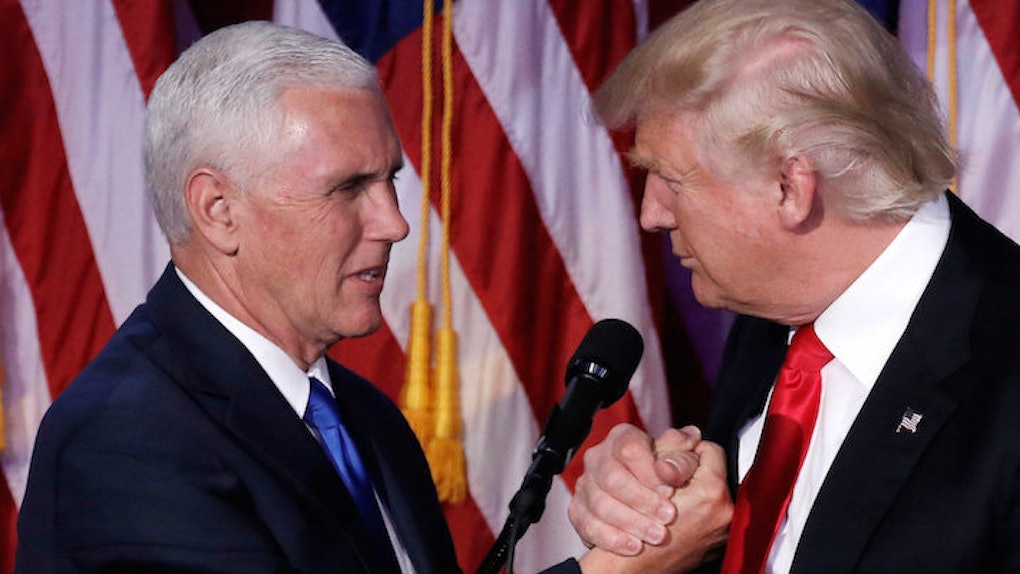 If Donald Trump Resigns, This Is What Happens

Many people are hoping Donald Trump will resign before serving a full presidential term.

A recurring question throughout the 18 months before election day was if Trump actually even wanted to be president at all.

He made a lot of gestures to indicate he didn't want to win the election such as alienating voters who are of color, women, Muslim and/or Jewish and so on.

The Trump family has also indicated that living in the White House would be a weird move from a Trump building.

There's also that whole issue about how he's never served a public office and has no idea what it entails -- he very well might get overwhelmed and quit.

Oh, and there's the possibility of him getting impeached.

So, people are hoping and wondering if Trump would resign before his first term is done.

Should Trump resign from the presidency, things would not be much better.

The 25th Amendment stipulates when an American president resigns, the vice president takes over.

So that means if Trump resigns, Mike Pence would take over.

And that would be even more fucking terrifying than a Trump presidency.

Pence is a politician so he actually knows how to do things and he wants to do really, really messed up things.

As governor of Indiana, Pence made it clear he is one of the most extreme politicians when it comes to anti-LGBT and anti-women legislation.

Pence is against same-sex marriage.

He supported conversion therapy, which is essentially traumatizing people to try and make them stop being gay. He signed the Religious Freedom Restoration Act, which legalized discrimination against gay people.

Pence rejected a federal directive asking states to allow students to use the bathroom of the gender with which they identify.

He is loudly against Planned Parenthood. He cut funding for it in Indiana, which led to an HIV epidemic.

Pence is also anti-abortion. He passed one of the most sweeping, disgustingly manipulative anti-abortion bills in the country earlier this year.

That law stipulated women have to cremate or bury any fetal remains -- so that means any fetus that was aborted or miscarried or stillborn.

It created an 18-hour waiting period for abortions, requiring women to listen to a fetal heartbeat before getting an abortion. It prohibited women from aborting fetuses on the basis of disabilities and anomalies.

Pence refused to discuss racial bias as it pertains to police shootings during the vice presidential debate. He said he finds the concept of implicit bias "offensive."

So if you like black people, LGBT people and women, you probably don't want Trump to resign.

Unlike Trump, Pence knows how to use the law. He knows how to be a politician and enact things that disrupt the lives of his constituents.

To me, he is a much scarier prospect than a spray-tanned reality TV star as president.