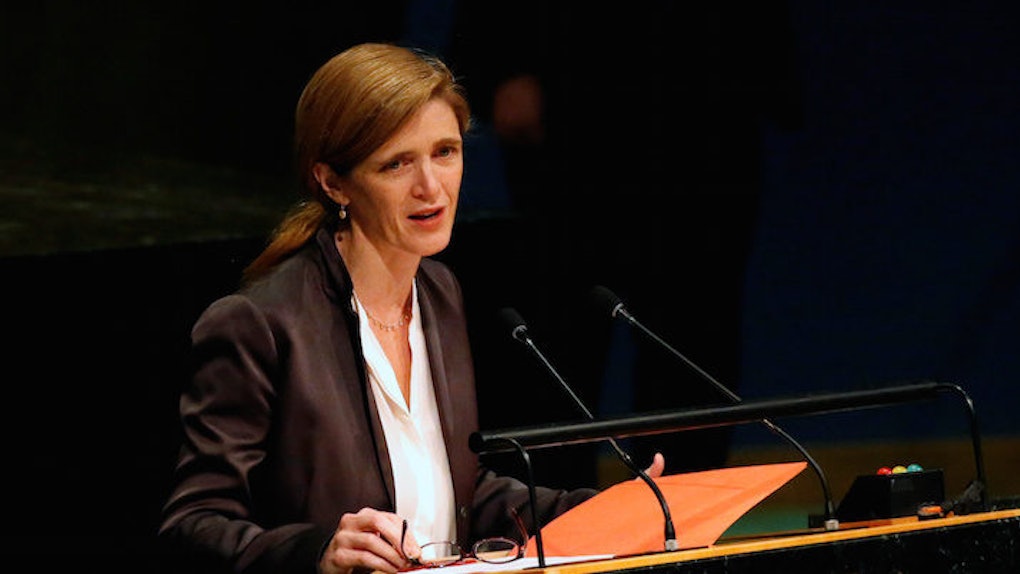 United States Ambassador to the United Nations Samantha Power had some strong words for the leaders of Syria, Russia and Iran on Wednesday.

Power spoke at the UN Security Council Emergency Briefing on Syria. She directly addressed Syrian President Bashar al-Assad as well as the leaders of Russia and Iran, who have been involved in the ongoing conflict in Syria.

Is there no act of barbarism against civilians, no execution of a child that gets under your skin?

The city of Aleppo has been heavily bombed by Assad-led forces over the last week. The government is attacking the last of the rebel forces in eastern Aleppo.

The attacks are killing an untold number of rebel forces and civilians.

To the Assad regime, Russia and Iran, your forces and proxies are carrying out these crimes. Your barrel bombs and mortars and airstrikes have allowed the militia in Aleppo to encircle tens of thousands of civilians in your ever-tightening noose. It is your noose. Three Member States of the UN contributing to a noose around civilians. Are you truly incapable of shame? Is there literally nothing that can shame you? Is there no act of barbarism against civilians, no execution of a child that gets under your skin?

Many people are trying to flee, but it is being made impossible by the attacks.

A cease-fire was held briefly on Tuesday, brokered by Turkey and Russia. This was supposed to allow civilians time to evacuate to safety.

But the cease-fire was quickly broken.

Power said that by rejecting UN Red Cross attempts to evacuate civilians, the Assad regime, Iran and Russia "are signaling to those militia who are massacring innocents to keep doing what they are doing."

You bear responsibility for these atrocities.

The ambassador said the massacre in Aleppo is now one of the events "that define modern evil," including Halabja, Rwanda and Srebrenica.

Russian Ambassador to the UN Vitaly Churkin criticized Power, citing America's damaging role in the Middle East, including "your role in the creation of ISIS as a result of US and UK intervention in Iraq."

As the ambassadors spoke, more reports emerged of mass executions being carried out by the Syrian government.