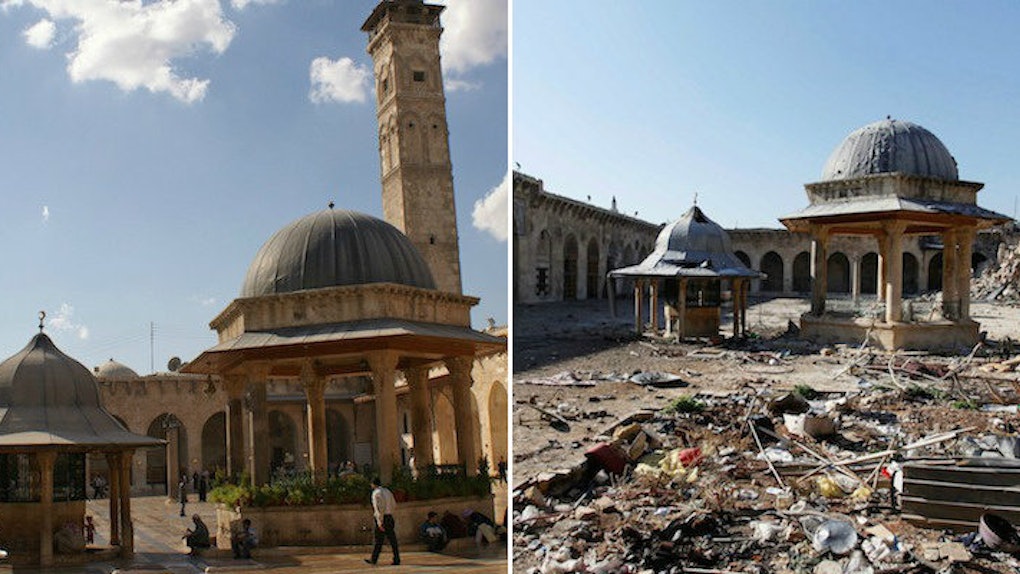 Heartbreaking Before And After Photos Of Aleppo

Horrifying reports are coming out of Aleppo as pro-government forces, aided by Russian airstrikes, push the last remaining rebels out of the city.

Civilians have reportedly been shot on the spot, including women and children.

Thousands are fleeing the city, desperate to survive.

On Tuesday, there were reports a ceasefire had been agreed upon in order to allow civilians to safely leave the city.

Sadly, it seems this did not last.

Pounding the east of #Aleppo with dozens of artillery bombs since one hour until now we have counted more than 100 bombs.#Stand4Aleppo pic.twitter.com/1EG68WdpQV — Zouhir_AlShimale (@ZouhirAlShimale) December 14, 2016

This image of a father fleeing Aleppo while holding his child and an IV drip is a haunting depiction of what the people of this city are going through.

Aleppo was once Syria's largest city and the center of finance and industry in the country.

It's a city with a rich history and beautiful architecture.

After five years of war, however, it's been reduced to rubble.

Since mid-2012, Aleppo has been a key battleground in the conflict in Syria, and the results have been catastrophic.

This drone footage offers an eerie glimpse of what Aleppo looks like right now.

But it wasn't always this way.

These before and after photos of Aleppo show just how devastating the ongoing conflict has been on the city.

This is what the Old City of Aleppo looked like in 2009.

This is what the historic and famous Umayyad Mosque looked like in 2010.

This is what the Umayyad Mosque looked like by 2013.

This is what the Umayyad Mosque looks like in 2016.

This is what shops looked like in the al-Jdeideh neighborhood in 2009.

This is what the Shahba Mall looked like in 2009.

This is what the Shahba Mall looked like by 2014.

It wasn't that long ago Aleppo was a vibrant city, where the ancient and modern coexisted to create a beautiful, thriving metropolis.

But war can tear apart and destroy any city, no matter how magnificent or historic.

The world has failed Aleppo.