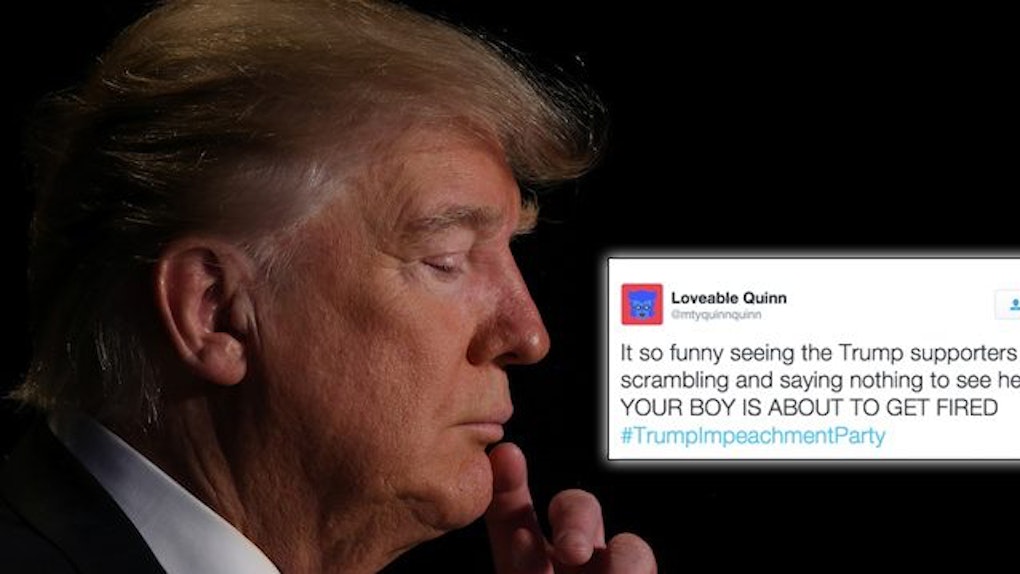 Check your mailboxes for an invitation because Twitter is throwing a "Trump Impeachment Party" and it's going to be lit.

It's safe to say Washington has been a complete shit show since Donald Trump took office, and people are convinced the president will inevitably be kicked out following a week full of leaks and lies.

Therefore, they started a hashtag to round up everyone who would be interested in celebrating Trump's possible impeachment.

Let's begin with a kickass guest list that Twitter is collectively writing, starting with our beloved Uncle Joe.

Ah, yes. I can't imagine Joe Biden rolling up to the party in anything less than a yellow sports car wearing aviators.

Once Joe Biden's at the party, you better believe his right-hand man Barack Obama isn't going to be far behind.

He definitely doesn't want to miss the party of the year.

What about the ladies, though?

Last but not least, on the VIP guest list, we give you the one and only...

Now that the gang's all here, we can get this impeachment party started.

Since the hashtag started, Twitter already began anticipating the turnout for the Trump Impeachment Party, and they hope it'll draw a bigger crowd than his inauguration did.

People are getting pretty amped up about the bash.

"YOUR BOY IS ABOUT TO GET FIRED."

"The White House has officially moved from chaos to crisis."

They're comparing Donald Trump to a shoplifter.

Somebody even thought of the genius idea to give everyone at the Impeachment Party Nordstrom gift cards as party favors.

Zedd offered to perform his music for us at the Impeachment Party, so get ready to dance.

This party is looking so freakin' fun that even a few Republicans admitted they're ready to rage in honor of Trump's impeachment.

Don't worry, man. I bet Obama will be at the party.

As much as everyone's excited to attend the imaginary party celebrating Trump's impeachment, others are skeptical about Pence being the runner-up.

"Pence is all the evil, half the narcissism & none of the entertainment value."

Of course, their worries are extremely legitimate.

If Donald Trump is really impeached, the hangover we all suffer the morning after will be just as painful as a Mike Pence presidency.

Until then, we can plan for the party and hope for the best.