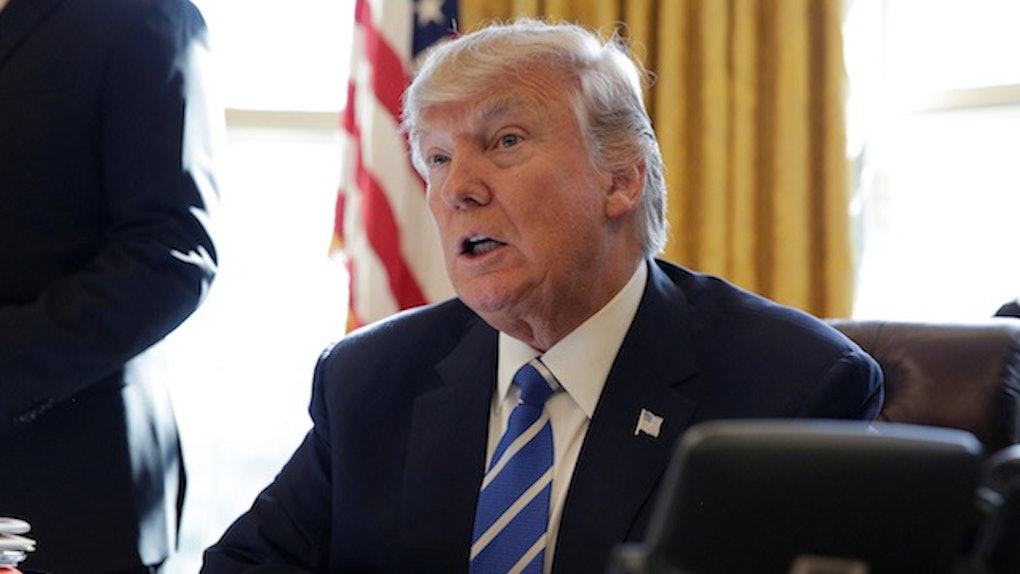 Donald Trump Can Be Removed Without Getting Impeached

President Donald Trump hasn't even been in office a full month yet, and a lot of people have already discussed the prospect of impeachment.

Legal experts have argued there are already grounds to call for impeachment and hundreds of thousands of people have signed a petition in support of it.

But at the moment, it's still pretty unlikely as Republicans control Congress.

However, beyond impeachment, there is another way Trump could be removed from office.

Section 4 of the 25th Amendment to the US Constitution, which was ratified in 1967, states,

These individuals simply have to write to the president pro tempore of the Senate (currently Senator Orrin Hatch) and the speaker of the House of Representatives (currently Rep. Paul Ryan), and inform them they do not think the president can fulfill his duties.

In other words, if Pence and eight Cabinet members decide Donald Trump is too cuckoo to be POTUS, they can boot him out.

But Trump would still be able to challenge this -- and knowing him, he probably would (first on Twitter, and then the official way once someone informs him how it works).

If this were to happen to Trump, he would have 21 days to convince Congress he's fit to be president.

A two-thirds majority in both houses of Congress would have to vote to keep Mike Pence in charge.

Otherwise, Trump would get the job back.

Section 4 of the 25th Amendment essentially exists in case a president falls ill or is injured and unable to fulfill his or her duties.

But, theoretically, it could be invoked if a president is putting the country at risk with erratic behavior, such as threatening foreign leaders with invasion during routine phone calls or tweeting absurd things at odd hours.

Just to be clear: This has never happened and it doesn't appear it will occur anytime in the near future.

But it is a very interesting aspect of the US Constitution and this little place we call America.

Plus, given that Trump has consistently expressed an interest in nuclear proliferation, it's somewhat comforting to know this is an option.

Regardless of how you feel about Vice President Mike Pence, it's fair to say he's a better option than nuclear annihilation.

At the same time, if this did happen, it could throw the government into complete disarray.

A lot of Americans probably don't even know this is possible, and it could create a great deal of outcry both in Washington and across the country.

With that said, the government isn't doing so well at the moment as it is.

It's quite a time to be alive.

Citations: The 25th Amendment, explained: how a president can be declared unfit to serve (Vox)