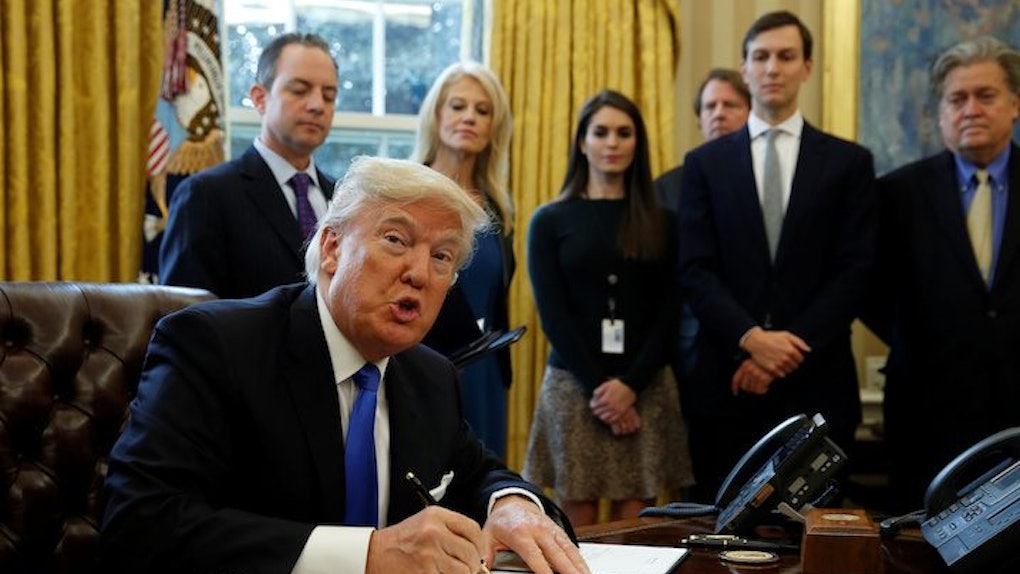 President Donald Trump has been in office for less than a month, and people are already calling for him to be impeached.

A petition calling for Trump's impeachment has over 600,000 signatures.

Politicians have also joined this discussion.

On Monday, Democratic Rep. Maxine Waters of California mentioned the topic of impeachment on three separate occasions: once at a press conference, then in an interview with Teen Vogue and finally in a video she posted to Twitter.

Legal experts are also arguing there are justifiable reasons for impeachment due to the foreign emoluments clause.

It has been widely acknowledged that, upon swearing the Oath of Office, President Donald Trump would be in direct violation of the foreign-emoluments clause of the U.S. Constitution.

If you haven't heard of the foreign emoluments clause, Nelson and Bonifaz state, "You're not alone."

"No person holding any Office of Profit or Trust under [the United States], shall, without the Consent of the Congress, accept of any present, Emolument, Office or Title of any kind whatever, from any King, Prince or foreign State." - The foreign-emoluments clause

They go on to explain,

[The foreign-emoluments clause is] tucked away in Article I, Section 9, of the Constitution. It's clause number 8. It states, in pertinent part: '... no person holding any Office of Profit or Trust under [the United States], shall, without the Consent of the Congress, accept of any present, Emolument, Office or Title of any kind whatever, from any King, Prince or foreign State.' Where Trump runs afoul of the foreign-emoluments clause is that, first and foremost, he is a businessman with significant financial interests and governmental entanglements all over the globe. Moreover, Trump's businesses dealings are veiled in complicated corporate technicalities and lack transparency.

They have a point.

Trump has business ties in countries across the globe.

Even though Trump has claimed he's distanced himself from his businesses, documents show he's still benefiting from them.

The documents were obtained via a public records request from ProPublica, an investigative news service, and first reported by the New York Times.

Correspondingly, as Nelson and Bonifaz highlight,

Examples of existing business arrangements that constitute violations of the foreign-emoluments clause include: China's state-owned Industrial and Commercial Bank of China is the largest tenant in Trump Tower, and the state-owned Bank of China is a major lender to Trump. Trump's business partner in Trump Tower Century City in Manila, Philippines is Century Properties, which is run by Jose Antonio, who was just named special envoy to the United States by the president of the Philippines. Further, many Trump Organization projects abroad require foreign government permits and approvals, which amount to substantial financial benefits that also constitute foreign emoluments... Trump's decision to continue the business of the Trump Organization, continue to maintain his substantial ownership of the organization and turn the management of it over to his children, is woefully inadequate in addressing the emoluments clause.

But is all of this enough to lead to Trump's impeachment?

Here's what would need to happen for Trump to get impeached.

According to the US Constitution, Congress has the power to put certain public officials (like the president) on trial and remove them from office.

Impeachment is essentially a formal charge of misconduct against the president.

"The President, Vice President and all civil officers of the United States, shall be removed from office on impeachment for, and conviction of, treason, bribery, or other high crimes and misdemeanors." - US Constitution, Article II, Section 4

In order for a president to be impeached, someone in the House of Representatives must introduce a resolution either calling for impeachment or an inquiry into allegations of misconduct.

Typically, it's up to the House Committee on the Judiciary to investigate the pertinent allegations.

If it's determined there are grounds for impeachment, the House then votes.

A majority of the House must vote for impeachment in order for the process to move forward.

If this occurs, the Senate then holds a formal impeachment trial and votes on whether to convict the president of the charges.

Members of the House, typically from the Judiciary Committee, act as prosecutors during this process and manage the Senate trial.

Two-thirds of the Senate must vote in favor of conviction in order for a president to be removed from office.

Only two presidents have been impeached: President Bill Clinton and President Andrew Johnson.

Both were acquitted in the Senate.

So, no POTUS has ever been removed from office via impeachment and conviction.

In short, impeachments are very rare.

With that said, it seems very improbable Trump will be impeached anytime soon.

Republicans currently control Congress (with a majority in the House and the Senate).

At the moment, Trump has certainly done things individual Republicans have spoken out against, but hasn't done enough to sway mass numbers against him.

If a Democratic representative attempted to charge Trump with misconduct and move toward impeachment, it would be a waste of time.

They'd need Republicans on their side, and that's not likely to happen.

Not to mention, even Democrats aren't totally on board with impeaching Trump quite yet.

[There] are grounds for displeasure and unease in the public about the performance of this president, who has acted in a way that is strategically incoherent, that is incompetent and that is reckless. And that is not grounds for impeachment. When and if he breaks the law, that is when something like that would come up. But that's not the subject of today.

There's no question Trump is a controversial leader, and, based on approval polls, he's the most unpopular new president in US history.

Still, impeachment seems to be a very slim possibility at present.

This doesn't mean it couldn't happen in the future.