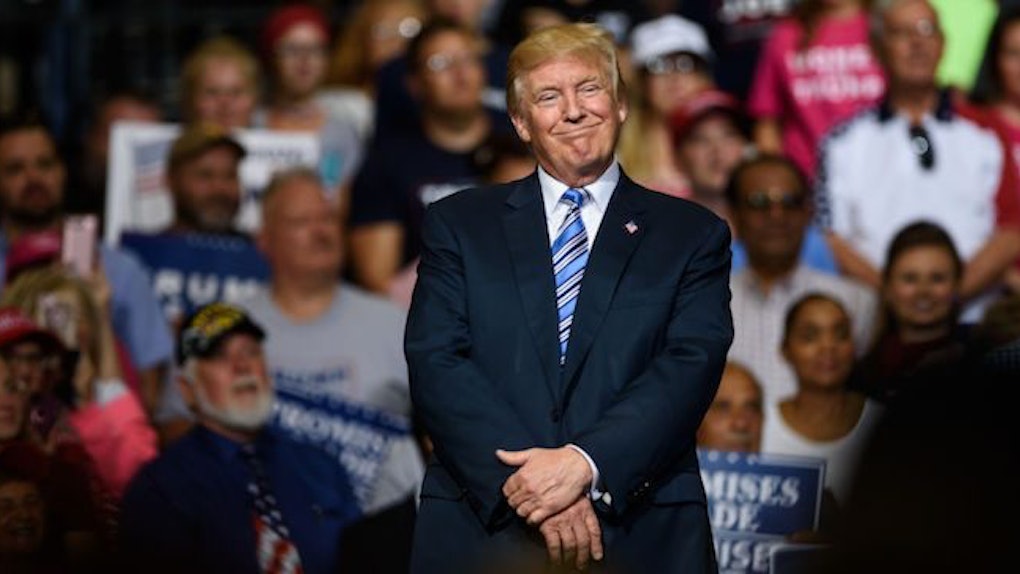 Most would likely agree it's extremely important for the President of the United States to decry acts of violence and hate that take place on American soil. But President Donald Trump is ignoring a terror attack against Muslims in Minnesota that occurred on Aug. 5. Trump said nothing about it over the weekend and continued this trend on Monday, Aug. 7, when he started the day with a series of tweets attacking the media and his critics.

Fortunately, no one was hurt, but the building did reportedly sustain damage because of the explosion.

While visiting the mosque in the wake of the incident on Sunday, Aug. 6, Minnesota Governor Mark Dayton said the incident was an "act of terrorism" and a hate crime, according to Minneapolis Star Tribune.

What a terrible, dastardly, cowardly, terrible act this was that was committed. The destruction done to this sacred site is just unthinkable, unforgivable. I hope and pray the perpetrator will be caught and prosecuted to the full extent of the law.

Dayton also said that Minnesotans "accept," "support," and "respect" one another, adding, "We're not going to let one bad person get in the way of all that."

This is the type of response one would respect from a leader when his community is attacked. Meanwhile, Trump is silent.

Many seem to feel Trump doesn't care about this attack because it targeted Muslims.

Past remarks Trump has made about Muslims and Islam, as well as his controversial travel ban that targets six predominately Muslim countries, have led many to believe he's Islamophobic. Meanwhile, since Trump became president, there's been a documented rise in hate toward Muslims, but he's not prioritized this issue whatsoever.

According to a report released by the Council on American-Islamic Relations in July 2017, the number of anti-Muslim hate crimes in the United States rose by 91 percent in the first half of 2017 compared with the same period in 2016. Moreover, according to a report released by Southern Poverty Law Center in February 2017, the number of anti-Muslim hate groups in the United States nearly tripled since Trump announced his presidential campaign in 2015.

Correspondingly, research from the nonpartisan Center for the Study of Hate & Extremism at California State University, San Bernardino, found a strong correlation between the rhetoric surrounding the 2016 U.S. presidential campaign and a rise in hate crimes in the United States

Currently, there are roughly 3.3 million Muslims in America, and it seems a significant portion don't feel welcome here. A Pew Research Center survey released in July 2017 showed 68 percent of Muslims say Trump makes them "feel worried," and 75 percent said there is a lot of discrimination against Muslims in the United States.

Based on his silence, Trump isn't fazed by any of this. The president is quick to condemn attacks perpetrated by jihadists against Westerners, but is seemingly nowhere to be found when Muslims are the victims of attacks or hate crimes.