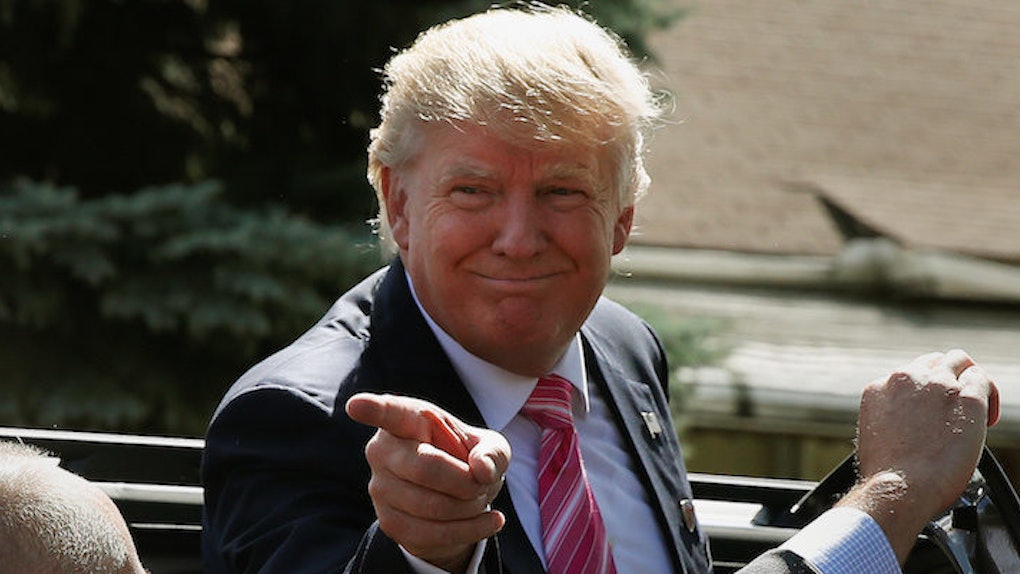 During an interview on ABC with David Muir, he said,

Muir followed up with,

When you talk about her not looking presidential, are you talking about aesthetics?

I'm talking about in general.

In general, Trump is right... if he's talking strictly about American presidents.

Clinton does not look like any other president this country has ever had.

It's obvious what the difference is, guys. Unlike any other president I can think of, Clinton is blonde!

Trump has a lot of ideas about how a president should look, and he seems to believe looks are a big part of being president.

Look at that face! Would anyone vote for that? Can you imagine that, the face of our next president?

Again, it's clear why Trump thought Fiorina's face was unfit for the presidency: She's a blonde, too.

It DEFINITELY has nothing to do with her gender or anything like that.

Although, if one were to wonder what Trump thinks about what a woman's looks have to do with her profession, he's given us some hints.

He once told a female reporter,

We could say politically correct that look doesn't matter, but the look obviously matters. Like you wouldn't have your job if you weren't beautiful.

Trump's associates have also said Ivanka Trump would make a great vice president, given the fact that she's got essential VP qualities like "the beautiful looks."

Based on those ideas, Trump's ideal president would probably look something like this:

But we couldn't possibly think that Trump's suggestion of Clinton's lack of a "presidential look" has anything to do with her gender.

In fact, Trump has a lot of thoughts about what certain people should look like.

This isn't the first time Donald Trump has had a problem looking at someone different from himself and actually seeing them. He questioned whether a distinguished judge could do his job because of his Mexican heritage. He looked at a mourning Gold Star mother, and he made assumptions about her silence in grief. He looked at an accomplished anchor and suggested she was a 'bimbo.' And he looked at a sitting president and said he wasn't American. So, it's not surprising that Donald Trump doesn't think Hillary Clinton looks presidential.

Like Reynolds said, Trump does not particularly think President Obama has presidential looks, either. He started the "birther" movement, arguing that Obama isn't actually American.

And it's true: Obama does not have the presidential look America has historically seen.

This is another obvious one, guys: Obama plays basketball. I can't remember seeing any other American president hitting the court.

Based on this, Trump's ideal president probably looks more non-athletic, like this:

Trump has repeatedly called President Barack Obama "weak", thereby indicating that a weak person should not be president.

Instead, Trump appreciates leaders who are strong... like Vladimir Putin.

Trump has also criticized Clinton for not being strong enough to be president. Last month, he said,

Given that he's campaigning, we have to assume Trump thinks "presidential looks" are his own looks.

And what does Trump have to say about his own looks?

Trump wants you to know,

My hands are normal. Slightly large, actually. In fact, I buy a slightly smaller than large-size glove, OK?

Based on that, Trump's ideal president looks like this:

What else does Trump have to say about his own apparently "presidential" looks?

Aside from his masterfully big and definitely not small hands, Trump's presidential looks include other big things.

During a Republican debate last spring, he said,

[Rubio] referred to my hands — 'if they're small, something else must be small.' I guarantee you there's no problem. I guarantee.

So according to Trump, presidential looks include "something else" about a man not being small.

Based on this information from Trump, his ideal president looks something like this:

Just be sure to spell "wiener" correctly when you write it on your ballot in November.