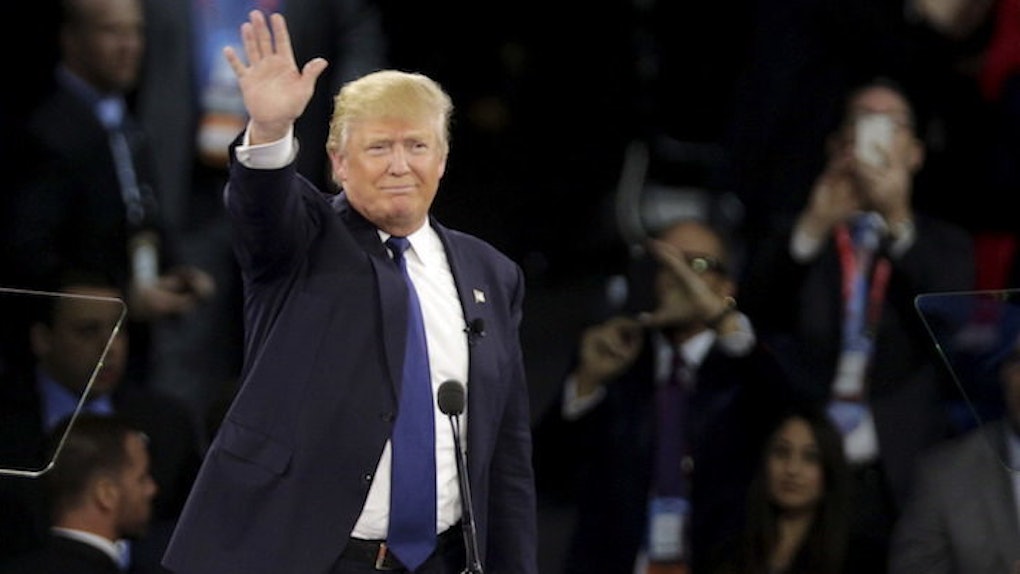 Growing up, I didn't realize how vitally important hand size is as a presidential qualification.

Yet here we are in 2016, and Donald Trump won't stop talking about the size of his hands like it's a matter of national security.

Trump's hands have been the subject of scrutiny since the 1980s, when Spy magazine, founded by Graydon Carter, started calling him "the short-fingered vulgarian," apparently annoying Trump.

It's not hard to gauge exactly why Trump is so bothered when people say he has tiny hands. For 12-year-old boys everywhere, small hands are generally equated with small penises.

And because #MasculinitySoFragile, of course Trump cannot stop defending his hands/penis. Trump is a misogynistic blockhead who wants everyone to know he's the manliest man who ever manned.

Carter went on to become editor of Vanity Fair. Back in November, he wrote a letter recounting his nickname for Trump, saying Trump is a bully with "skin of gossamer."

Over the last two and a half decades, Carter wrote, Trump has been sending him photos of himself, circling his hands in gold Sharpie to try to show that his fingers are not short. Carter said:

I almost feel sorry for the poor fellow because, to me, the fingers still look abnormally stubby.

Trump is obsessed with size. He needs to have the tallest phallic buildings in the skyline and the 'ugest rods in the polls.

During a debate at the end of February, hearing Trump go on and on about how big his political reach is, I couldn't help but wonder:

That same week, Marco Rubio took a moment to mock Trump's hands, apparently knowing it would bother him. Rubio said,

You know what they say about men with small hands? You can't trust them.

Following this comment, one week after I half-jokingly wondered when Trump would explicitly refer to the size of his penis on a national debate stage, he actually did it. Trump said:

[Rubio] referred to my hands -- 'if they're small, something else must be small.' I guarantee you there's no problem. I guarantee.

This week, the New Yorker took it further, putting short-fingered hands covered in Trumpisms on its cover.

Hillary Clinton has apparently been taking jabs at Trump's hands as well, according to CNN. While she won't comment on the size of her hands, she has been making repeated mention of their steadiness. She said,

We need steady, smart, strong minds and hands in the White House.

Not to be outdone, Trump responded to the remarks on Monday, saying,

I have the steadiest hands, look at those hands ... Far steadier than hers.

Given the assuredness of his response, we must assume Trump has spent significant time during this campaign doing hand-steadying exercises, such as curling his hand into a loose fist and moving it up and down in a practiced motion.

Trump took time between discussing other serious issues to address his hands with the Washington Post, according to an article published on Monday. He said,

My hands are normal. Slightly large, actually. In fact, I buy a slightly smaller than large-size glove, OK?

Honestly, until Trump takes a picture of his hands next to a stapler for size comparison, we just can't believe they're as big as he says they are.