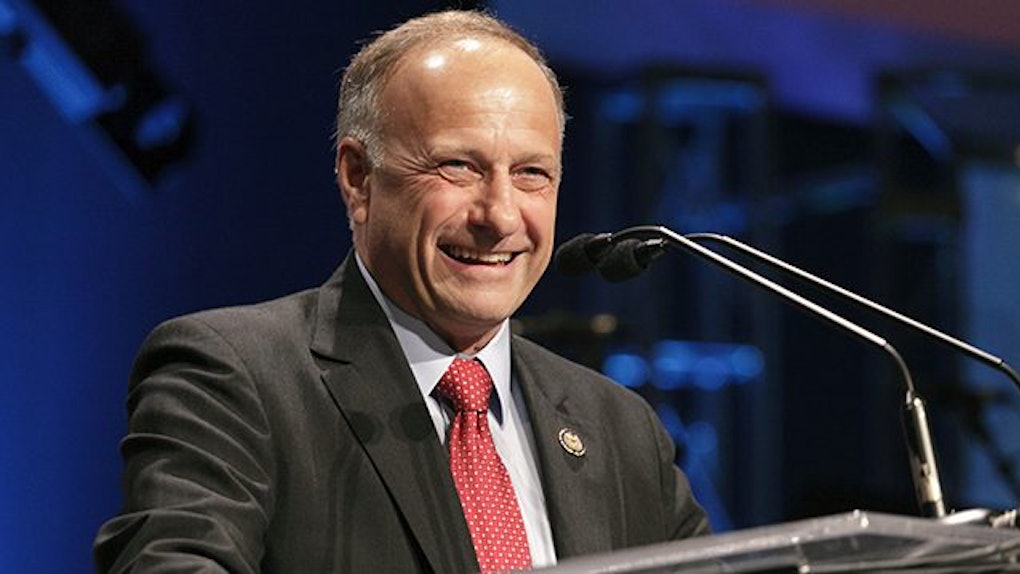 Why The Criticism Of Steve King Is Concerning

On Sunday, a politician said something that got both conservatives and liberals pretty upset.

That politician was Steve King, a Republican congressman from Iowa who sent out this tweet about culture being difficult to maintain with "somebody else's babies:"

The tweet was criticized for being xenophobic, racist and bigoted. Meanwhile, even politicians who didn't hammer King made sure to distance themselves from what he said.

Regardless of how harshly he was criticized (and by whom), it seems the words "somebody else's babies" are what really stung for people.

It appears using that type of language was the last straw, particularly for conservatives, who always seem the most reluctant to call out, or at least label something as racist.

Steve King's word choice, however, is not the most shocking part of this story at all.

For anyone who knows what racist dog whistles sound like, the most shocking part is there were people who were surprised about Steve King's comments in the first place.

Keep in mind that we're talking about the same congressman who, just this past summer, tried to essentially question the merits of other races.

During an MSNBC panel discussion, he said,

This 'old white people' business does get a little tired. I'd ask you to go back through history and figure out, where are these contributions that have been made by these other categories of people that you're talking about? Where did any other subgroup of people contribute more to civilization?

The fact that the same person who spoke those words would then say something about "somebody else's babies" should be totally unsurprising. You would have thought King's beliefs would be well-known by now.

So, it was bewildering to see some conservatives – who I'd say are really good commentators – react so naively to the comments.

This is just amazing for a couple of reasons.

If you're really cynical about Republicans in particular, you might be tempted to label the whole party as "racist." But comments like these imply something else: Many are just really ignorant about what racism is.

I don't mean "ignorant" as an insult, either. I mean to say there are lots of well-meaning people who legitimately have no idea what racism is... unless someone uses a few buzzwords, like the n-word or "somebody else's babies."

That's nothing new, of course. We've talked before about how there's an obsession with racist buzzwords, but way less attention paid to actual racism. Still, the reaction to Steve King highlights just how deep the problem is.

A man who literally went out of his way to tout the supremacy of white people just surprised people by saying something a white supremacist would say.

It's actually crazy to see, and it's also concerning.

Time after time, conservatives have been criticized for the racist undertones that are apparent in their politics. That doesn't mean the party itself is racist, per se.

However, the rhetoric used by many conservatives for so long has indicated racism can find a place within the party. You would have thought if anything, this past year would have proven that.

A presidential candidate – who eventually won – called for a Muslim ban. A senator who was deemed too racist to be a federal judge in the '80s became the nation's attorney general. A transparently xenophobic campaign was successful.

Immigrants became even bigger scape goats than they already are, and a man who boasted about making a platform for the alt-right is the chief strategist for the president.

As The Atlantic's Vann Newkirk has said, the racism is not even being hidden anymore.

And yet, there are still people in power, like Paul Ryan, who think Steve King misspoke... even though King very clearly doubled down.

That is scary because if leaders – both in the media and in Washington – can't even recognize racism when it's staring them in the face, there's reason to fear no one will stop that racism as its role continues to grow even larger in politics.