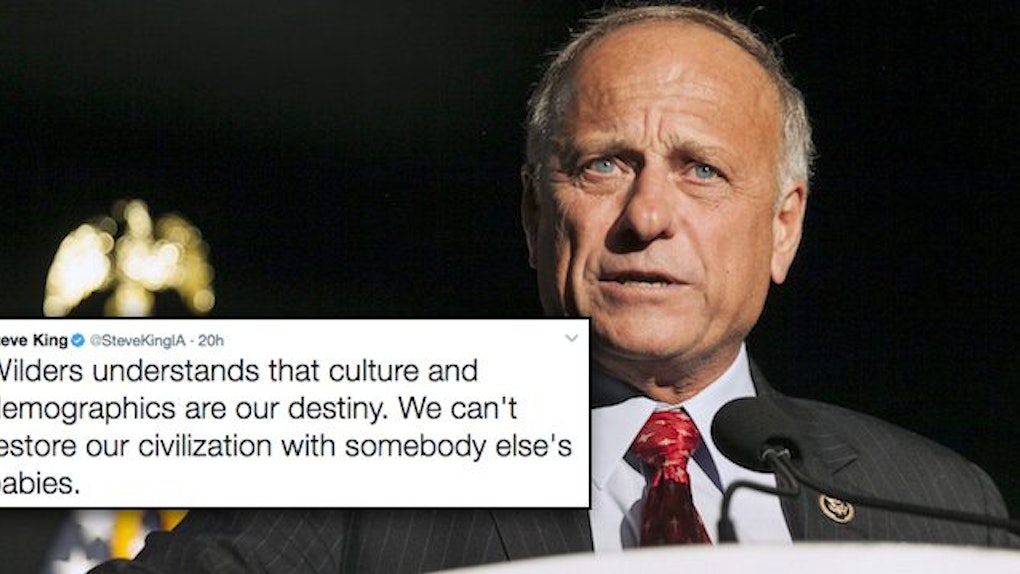 Representative Steve King of Iowa went from basically racist to full-on white supremacist with a tweet over the weekend.

He tweeted in support of Geert Wilders, a far-right Dutch politician.

Wilders understands that culture and demographics are our destiny. We can't restore our civilization with somebody else's babies. https://t.co/4nxLipafWO — Steve King (@SteveKingIA) March 12, 2017

Wilders understands that culture and demographics are our destiny. We can't restore our civilization with somebody else's babies.

King, a Republican, came under criticism for that tweet almost immediately as a bunch of people were like, "Uhhh dude, that's really fucked up."

What King's tweet means, essentially, is that he only wants white Christians to populate America (and the Netherlands, too, I guess).

A lot of people took King to task for promoting white nationalist ideals.

Because, yeah, that idea of "only white Christian babies" is literally the main point of white nationalism.

For some context, King has often said and done things that others have called out as racist. During the 2008 election, for instance, he said Barack Obama's middle name, Hussein, would have "radical Islamists" "dancing in the streets."

King voted against funding for Hurricane Katrina aid, doesn't like affirmative action because it excludes white men and keeps a Confederate flag on his desk. So, uh, yeah.

Other members of Congress, including Republicans, called out their colleague for his racist tweet.

I do not agree with Congressman King's statement. We are a nation of immigrants, and diversity is the strength of any nation and any community.

Some people reminded King of what non-white people have contributed to civilization.

Of course, not everyone was mad about King's tweet.

Richard Spencer, the white supremacist who got punched in the face earlier this year, and David Duke, former leader of the Ku Klux Klan, totally agreed with King's white nationalist-tinged tweet.

Regarding David Duke, his words and sentiments are absolute garbage. He is not welcome in our wonderful state.

King himself stood by his tweet in comments made on Monday morning.

In an appearance on CNN, King said he "meant exactly what I said." He explained,

We need to get our birth rates up or Europe will be entirely transformed within a half century or a little more.

By the way, that whole "get our birth rates up" thing reeks of sexism. (Ladies, stop controlling your damn uteruses and just fulfill your life purpose of popping out babies -- but only if you're a white woman, of course!)

King went on to say,

That's the push to bring in much illegal immigration into America, living in enclaves, refusing to assimilate into the American culture and civilization. Some embrace it, yes. But many are two and three generations living in enclaves that are pushing back now in resistance against the assimilation.

What exactly he wants immigrants to "assimilate to" he did not entirely specify, but I'm betting he had that Confederate flag in mind as he was saying it.

Just to make sure you know he believes white supremacist ideas, King said,

But, he insisted, this is about "the culture, not the blood." So, there you have it.

Citations: GOP lawmaker: 'We can't restore our civilization with somebody else's babies' (The Hill), Iowa GOP chairman slams Steve King for tweet supporting far-right Dutch politician (The Hill), Steve King Won't Back Down From His Tweet About 'Somebody Else's Babies' (Talking Points Memo)