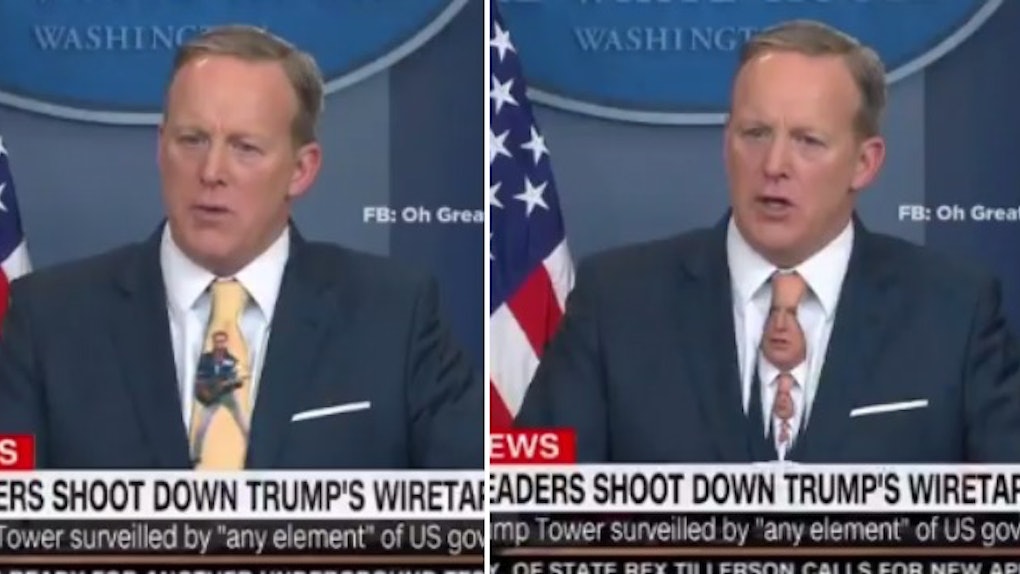 Sean Spicer's Tie Got Turned Into A Green Screen On Twitter

At this point, Sean Spicer could win the Tour de France backward seeing as how he's so damn good at backpedaling.

BURN! *Waits for you to stop giving me a standing ovation in front of your laptop or mobile device*

The White House press secretary recently got into a heated debate with the press corp over Trump's wiretapping claims.

I can't wait for Melissa McCarthy to parody this. I mean, Sean basically provides all the script you'd need to fill 121 "SNL" episodes back to back to back.

Such a reach, right? Who would actually have the gall to take President Trump at his word?

The real awfulness, however, is the green, St. Paddy's day-themed tie Sean Spicer is wearing. Luckily for everyone, a genius by the name of Jesse McLaren decided to turn it into a green screen, and the results are breathtaking.

My personal favorite? When Sean Spicer's tie got turned into an old Microsoft screensaver... I could watch that maze for hours. In fact, I did. I was a lonely, maze-loving child.

It's too bad we can't replace all of Sean Spicer on a green screen with a more competent press secretary. I know, that's wishful thinking on my part.

On behalf of all of America, thank you, Jesse McLaren.