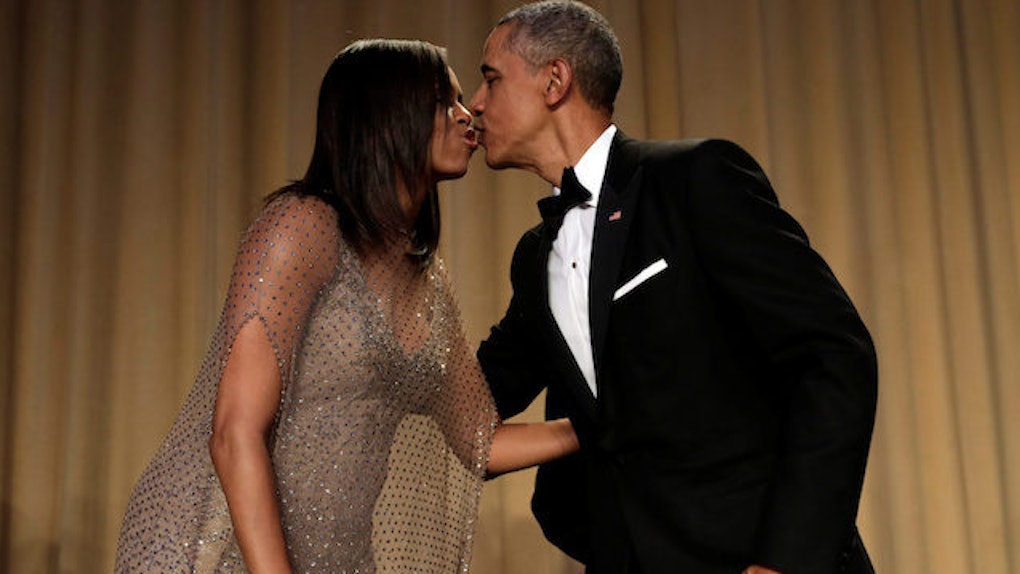 Obama Gives Down-To-Earth Love That We All Need

In case you weren't convinced President Obama and Michelle Obama are #relationshipgoals, let me get you up to speed.

It's just been revealed that our 44th president of the United States was known to help out his staffers who were contemplating popping the question to their significant others.

In between running the country — taking down Al-Qaeda's top leader, legalizing gay marriage and so on — Obama also found time to share some solid advice in the love department.

I have to say, that's pretty cool.

Obama broke down the proposal scenario to his staffers with two very simple questions:

Wow! So clear! I see the light!

Mr. President, guide us with our relationship woes, won't you? If only we were so lucky.

Well, one person from Obama's staff was that lucky.

Former State Department Assistant Chief of Protocol Nick Schmit married Washington Post Pulitzer Prize-winning journalist Jonathan Capehart earlier this year, and it was Obama's famous two questions that made made the two realize it was time to take things to the next level.

According to DailyMail.com, when former Attorney General Eric Holder married the couple in Washington DC, he actually cried.

I've done I don't know how many weddings. this is the first time I've ever shed a tear as the officiant.

And if you're still unconvinced about Obama's PhD in love and marriage, the president also served as a groomsman for his staffer Marvin Nicholson, who married Helen Pajcic, chief of staff in the Office of Planning, Evaluation and Policy Development for the US Department of Education at the beginning of 2017.

Obama's arguably the most powerful man in the world, yet here he is, in the wedding party of his longtime golfing buddy and staffer, like it's NBD.

Let's face it. We all struggle when it comes to love.

We need guidance. We need someone to answer our dating questions. We need confirmation as to whether or not we're actually falling in love.

But Obama makes it easy. He takes the questions, the doubt and the drama out of it and makes everything pure and simple.

It's matter-of-fact. It's real.

Obama, where can we reach you when you leave office if we have questions about our SO? Can we Slack you?

Citations: 'Do you love her and do you know she wants to marry you?' How President Obama's advice for marital bliss brought together two grooms and left a former attorney general in tears as he played officiant at their wedding (DailyMail.com), Jonathan Capehart and Nick Schmit: One Transition Speeds Another (New York Times)