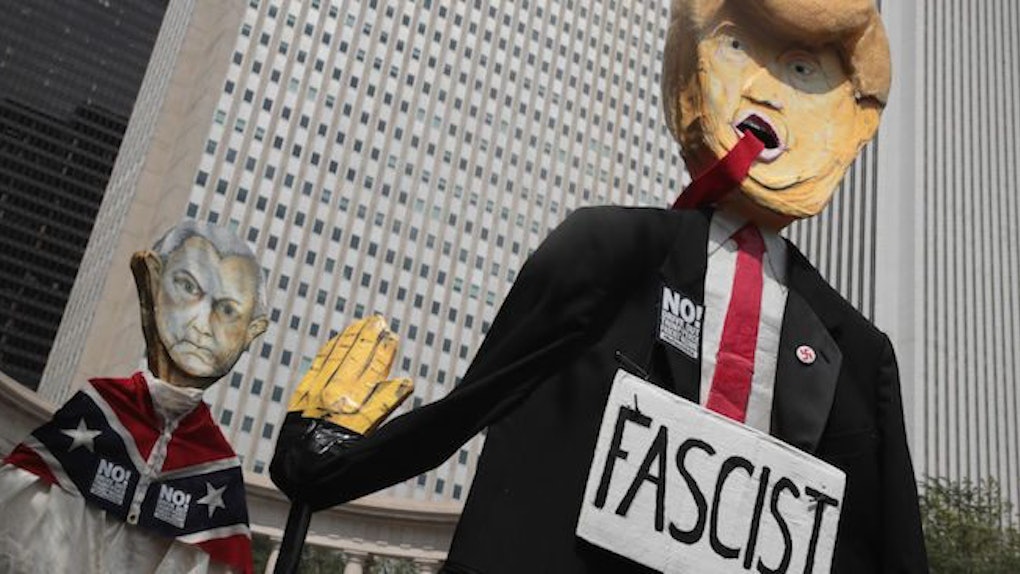 What Is The #NaziBucketChallenge? Twitter Users Call Trump A White Supremacist

If the White House was hoping for a relatively drama-free week on the racism front, it didn't get it. On Friday, the hashtag #NaziBucketChallenge was blowing up on Twitter. Assumedly a rendition of the #IceBucketChallenge, Twitter users throughout the day have been sharing a template tweet calling President Donald Trump a white supremacist.

The hashtag comes as the president is already facing criticism for what appears to be contradictory statements on Charlottesville and the hate groups that rallied there. Last night, Trump signed a joint resolution by Congress forcing him to condemn white supremacist groups involved in last month's rally, but earlier that day, he had reiterated his "both sides" statement, blaming counter-protestors as well for the violence.

The hashtag challenge appears to have started on Wednesday, when TV and film writer Michael Green posted on Twitter. His tweet called the president a white supremacist, clearly siding with and defending Jemele Hill, who was chastised for doing the very same on Monday. Hill, an ESPN sports commentator, shared her personal opinion about Trump in a series of tweets earlier this week, and in response, the White House labeled this a "fireable offense" and urged the network to dismiss her. In a press conference on Wednesday, White House Press Secretary Sarah Huckabee Sanders said,

I think that's one of the more outrageous comments that anyone can make, and certainly something that I think is a fireable offense by ESPN.

The network did not fire Hill, but it did accept her apology for speaking publicly on a platform where her comments might have been interpreted as representing ESPN. The drama sparked a national conversation on social media. Some called out the double standard of disallowing a woman of color to speak her mind while her white male peers are not as seriously reprimanded, some merely expressed support for Hill, some pointed out the members of Trump's administration who come from politically extreme backgrounds, and some criticized the fact that people were more fixated on the inappropriateness of her comment rather than whether there was truth to what she said. In particular, many argued that Barack Obama wouldn't have called for the firing of those who instigated the birther rumors. The list of grievances goes on. The president had responded to Hill's comments on Twitter with a nasty tweet of his own, calling on ESPN to apologize.

Though he was far from the first person to stand with Hill, Green called for others to follow suit and join him in calling the president a white supremacist.

In short order, many did.

Most tweets followed a formula, where users stated aspects of their identities in a set of three statements beginning with "I"m," and ending with the phrase, "I'm calling Trump a white supremacist."

Of course, there were variations and people took liberties with this.

Interestingly, the #NaziBucketChallenge tweets in general didn't include any identification with political party (except those tweets that condemned the hashtag as a "liberal" trend).

There were no shortage of users who took the opportunity to make other comments about the president, as well.

People from all backgrounds and all walks of life joined in the challenge, sharing their stories and calling out the president.

As expected, many on the right also took offense and shot back at the hashtag.

For example, the editor-at-large of Infowars, a right-wing outlet, was apparently unimpressed.

Kaya Jones, former member of the Pussycat Dolls, was also against the hashtag.

Whether people agreed with it or not, the hashtag appears to have worked, at least in affiliating the president with white supremacy.

As one Twitter user's photo showed, searching the hashtag brought up Trump's account as the first hit.

Will Trump fire back about this hashtag campaign, as he did with Jemele Hill's comments? We'll have to wait and see.