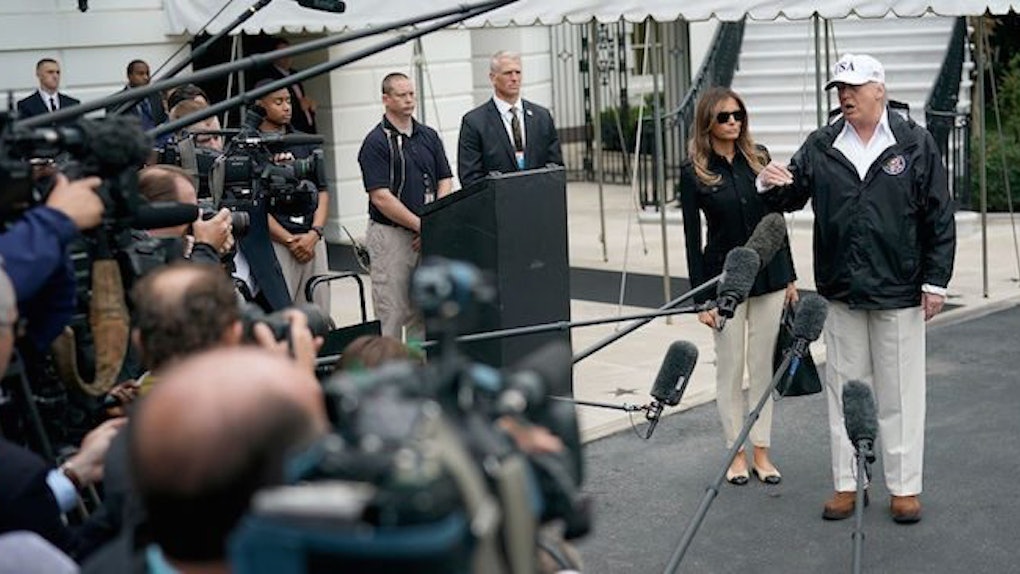 Earlier this week, Congress passed a resolution forcing President Donald Trump to condemn white supremacy. On Thursday night, Sept. 14, Trump signed the resolution, but if his signature was meant to make a statement, it only served to further contradict himself. Just hours earlier, he reaffirmed his previous statements that "both sides" were responsible for the violence in Charlottesville last month.

In statements to reporters on Air Force One on Thursday, President Trump explained a conversation he'd had with Senator Tim Scott of South Carolina, the only black Republican in the Senate. According to the New York Times, Scott had been invited to speak with the president about his reaction to the Charlottesville attack, which left one dead and several injured after a white nationalist rally and subsequent counter-protest turned violent. White House Press Secretary Sarah Huckabee Sanders said that the conversation with the high-ranking senator and the president went well, and Scott said he was "encouraged and surprised" at Trump's behavior during the meeting.

In his comments on Thursday regarding their meeting, Trump went off-script, so to speak, and may have shot himself in the foot. He said,

I think especially in light of the advent of Antifa, if you look at what's going on there. You have some pretty bad dudes on the other side also, and essentially that's what I said. Now because of what's happened since then with Antifa, when you look at really what's happened since Charlottesville, a lot of people are saying, and people have actually written, 'Gee, Trump may have a point.' I said there's some very bad people on the other side also.

People immediately called the president out on social media for signing the resolution to condemn hate groups at Charlottesville after again shielding them from full blame for the violence.

This is not the first time Trump's comments on Charlottesville contradicted a previous statement. In the immediacy after the "Unite the Right" rally, Trump was sharply criticized for his remarks that spread the blame to "both sides." Then, a day later, after having bowed to pressure and denounced the hate groups unequivocally in a second statement, he doubled down on his first statement, again saying that both sides were to blame.

The contradictions about the president's statements on white supremacy come on the heels of the White House calling for the firing of ESPN sports commentator Jemele Hill after she called the president a white supremacist. Social media erupted with criticism of how the sports network and administration handled the situation.

The joint resolution was approved by the Senate on Mon., Sept. 11 and the House the following day, leaving the final approval up to Trump. Many speculated that the president would not sign it. The resolution, S.J. Res. 49, as it's officially titled, calls on the President to:

speak out against hate groups that espouse racism, extremism, xenophobia, anti-Semitism, and White supremacy; and use all resources available to the President and the President's Cabinet to address the growing prevalence of those hate groups in the United States.

Additionally, the resolution urges the Attorney General (who would be none other than Jeff Sessions) to fully investigate all acts of domestic terrorism and violence by hate groups and prevent further attacks. It also calls on the AG to work with the FBI and other departments to improve reporting of hate crimes data.

Whereas Trump was criticized initially for failing to address the hate groups that rallied in Charlottesville, the new resolution specifically names white nationalists, white supremacists, the KKK, and neo-Nazis as perpetrators of hatred and bigotry.

With so much back-and-forth, it's getting difficult to follow what Trump's most recent stance is on white supremacy and Charlottesville, and how many times he's waffled. As the Washington Post's Aaron Blake puts it: "This is Trump quadrupling down" on his controversial statements.

When asked about the meeting, Mr. Scott said,

He is who he has been, and I didn't go in there to change who he was.

Apparently, the issue of not naming the hate groups specifically continued to be a trend. As one user pointed out, the White House's official statement on Thursday regarding Trump's signing of the resolution did not mention any of the white supremacist groups listed in the resolution itself.

Whether Trump will make another statement in the coming days (or hours) to clarify what exactly his position is on the issue remains to be seen. But if history has shown us anything, it's that we shouldn't be waiting for a consistent response from the president.