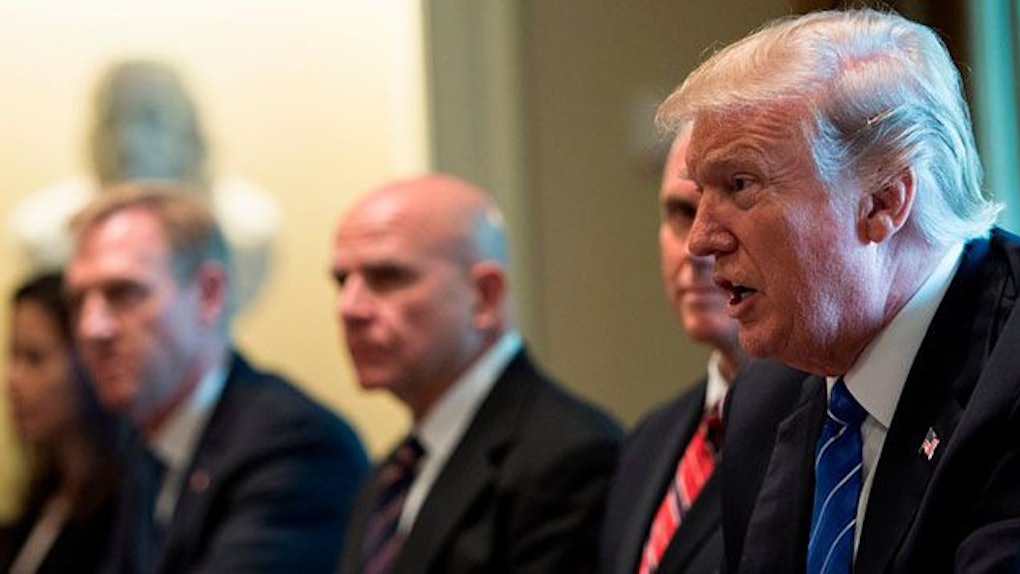 Did Trump Condemn White Supremacy? A New Bill Might Force Him To

On Monday, Sept. 11, the Senate passed legislation that condemns white supremacists, apparently in response to protests from similar groups in Charlottesville a month ago. On Tuesday, the House of Representatives gave its seal of approval, passing its own version of the legislation, creating a joint resolution between the two chambers of Congress. Now, the bill has been sent to the White House where, if signed, it would see President Donald Trump condemn white supremacy.

Whether or not President Trump actually will sign the bill is unclear at this point. Elite Daily has reached out to the White House for comment, but did not hear back at time of publication.

What is clear, however, is the intent of both Democratic and Republican members of Congress.

Usually, resolutions from Congress are meant to express the stance of Congress alone on a certain issue. However, because this recent bill -- regarded by some congressmen as the "Charlottesville Resolution" -- was framed as a joint resolution, a president's signature is required.

In other words, the bill is structured in a way that would force Trump to endorse action that ostensibly rebukes white supremacist groups, just weeks after the president was criticized by members of both major parties for not doing so.

During his initial response to the white supremacist protests in Charlottesville, Virginia, which turned violent after those groups clashed with counter-protesters, the president made remarks that were scrutinized as an evasion of confronting racist groups.

Trump said at the time,

It would later be reported that the president ad-libbed the mention of "many sides," which was key to the perception that he was purposely avoiding a specific condemnation of neo-Nazi groups.

Three days later, the president doubled down on those much-criticized remarks, telling reporters,

After a reporter interjected, Trump added,

The language of the Charlottesville Resolution takes a drastically different tone. The bill specifically condemns "white nationalists, white supremacists, the Ku Klux Klan, neo-Nazis, and other hate groups" and "urges the President and his administration to speak out against hate groups that espouse racism, extremism, xenophobia, anti-Semitism and white supremacy."

The joint resolution also honors Heather Heyer, the woman who was killed after a car rammed into a crowd of counter-protesters in Charlottesville, along with two Virginia state troopers who also lost their lives on the day. In addition, the bill regards the attack that took Heyer's life as an act of "domestic terrorism" and calls on Attorney General Jeff Sessions to investigate it as such.

As of Wednesday morning, the White House has yet to officially comment on whether the president will sign the joint resolution.