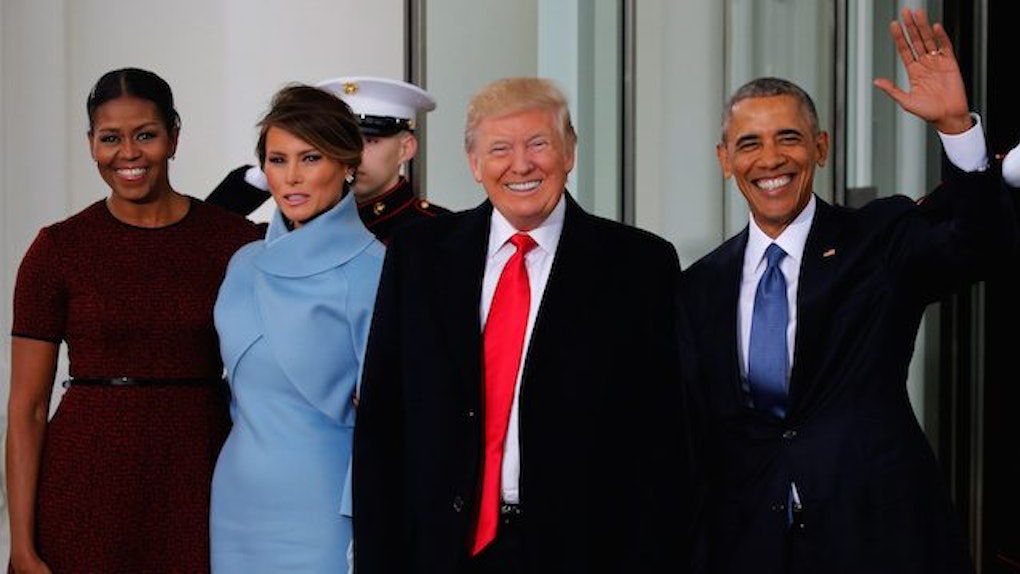 Pics Of Donald Trump With Obama Show Off His Tiny Hands

Barack and Michelle Obama greeted Donald and Melania Trump at the White House on Friday, the morning of the inauguration.

It was about as ridiculously awkward of a meeting as you can expect between a man accused of hiring prostitutes to pee on a bed and the couple he was trying to disrespect in the act.

But Trump made it unnecessarily more awkward for himself.

Because, you see, he showed his hand.

No, literally, he showed his hand.

Here's the thing: Trump has a very tense relationship with his hands.

His hands are generally spoken of in terms of their small size, especially in relation to his larger stature.

Trump's hands are seen as so small, in fact, that Vanity Fair editor Graydon Carter regularly refers to the reality TV host as "the short-fingered vulgarian."

This so frustrates Trump that he, in turn, regularly sends Carter photos of his hands to prove their proportional size.

But he lost that argument on Friday, when he let his disproportionately-sized hand rest next to Obama's hand as they stood for photos.

Obama plays basketball, so we know he's got at least decently usable hands.

Barack is also two inches shorter than Trump at 6'1, and also smaller in weight.

So it stands to reason that Trump's hand would be larger than Obama's hand.

So there we have it. This is a conclusive piece of evidence on the relative size of Trump's tiny hands.

This is an especially tense point for Trump as hands are joked about in proportion to the size of a man's penis -- as any 13-year-old, who has the same priorities as Trump, will enthusiastically tell you.

Trump has, indeed, brought up the size of his penis on a national stage already. We look forward to more too-loud defenses of our commander-in-chief's genitals.