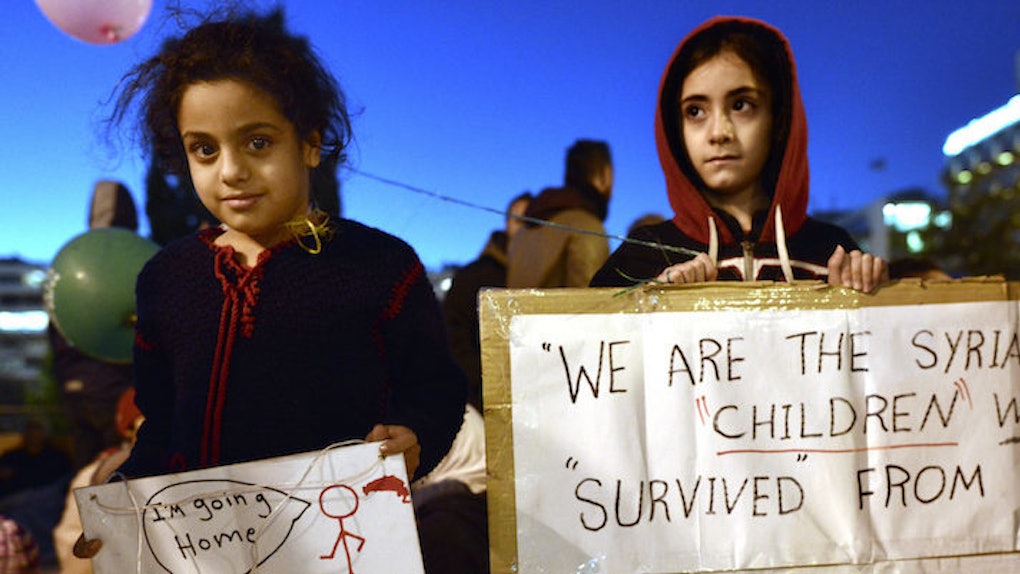 Why Not Helping Refugees Actually Makes The World Less Safe

If you're blaming refugees for the Paris attacks on Friday and saying it's proof we shouldn't be helping them, you're an assh*le.

Sorry I'm not sorry for employing such language, but that attitude is not only inhumane, it's impractical.

By using the Paris attacks to contend we shouldn't help refugees, you're politicizing the deaths of innocent people killed by terrorists to prevent the assistance of other innocent people who are fleeing terrorism.

So, well done, you're officially a horrible person.

Before the Paris attacks, vultures like Republican presidential candidate Donald Trump contended we shouldn't help refugees because there might be terrorists within their ranks.

The events in Paris on Friday amplified such fears, given one of the Paris attackers reportedly used Syrian documentation to enter Greece and eventually France. Now politicians in the US are taking steps to prevent the government from helping refugees. This is insanity.

Nevermind at least five of the attackers were French nationals, just because one of the attackers might've entered Europe hiding among refugees does not mean we should vilify millions of refugees justifiably trying to escape war and persecution.

There are around four million Syrian refugees. Blaming all of them for the Paris attacks is akin to saying all Muslims are terrorists.

But if you concede blaming refugees for the Paris attacks is wrong and still don't want to help them, you're also part of the problem. Not helping refugees makes the world less stable.

We are currently witnessing the worst refugee crisis of our era. There are around 19.5 million refugees globally (and not all of them are from Syria, by the way).

Not assisting refugees is against the globe's common interests. It's not sustainable to have millions of people worldwide who don't have a steady place to live, with no hope of a prosperous future.

In the old ways of thinking, the plight of the powerless, the plight of refugees, the plight of the marginalized did not matter. They were on the periphery of the world's concerns. Today, our concern for them is driven not just by conscience, but should also be drive by self-interest. For helping people who have been pushed to the margins of our world is not mere charity, it is a matter of collective security. And the purpose of this institution is not merely to avoid conflict, it is to galvanize the collective action that makes life better on this planet.

From both a selfless and selfish standpoint, helping refugees makes sense.

Moreover, we need to dismiss the idea ISIS is somehow in cahoots with the refugees. ISIS hates the refugees as they contradict the notion it has created an Islamic utopia, which is central to its propaganda and recruiting efforts.

#ISIS wants to disrupt refugee fleeing to Europe bc it contradicts their narrative that the Islamic Caliphate is a safe refuge for Syrians. — Ahmed Shihab-Eldin (@ASE) November 16, 2015

one reason to bring a Syrian passport with you to commit a terror attack—to demonize refugees locally, which is exactly what ISIS wants. — Mike Giglio (@mike_giglio) November 14, 2015

There's also the fact most Syrian refugees reside in Jordan, Lebanon and Turkey, where they have very few options.

If the wider world denies these refugees entry and they can't work in those countries, they might very well consider joining ISIS given it pays reasonably well.

Beyond the basic humanity, think of the recruitment tool handed to ISIS if the door was uniquely shut on millions of Muslim refugees. — Sabrina Siddiqui (@SabrinaSiddiqui) November 16, 2015

If people really don't want Syrian refugees entering their countries and they're not helping the ones who've ended up in Jordan, Lebanon and Turkey, they have no business complaining. If you don't want them in your country, help them there. It's very simple, and there are plenty of ways you can assist.

And if you're of the opinion the US has already done enough to help the situation, perhaps you should familiarize yourself with America's federal budget and what's prioritized.

On an annual basis, the US spends around 18 percent of its $4 trillion budget on defense, which comes to around $600 billion. Yet it spends less than one percent on foreign aid.

It's true the US has committed around $4.5 billion to help Syrian refugees, but that's chump change in compared to what it's spent bombing ISIS ($11 million per day, $5 billion in just one year).

The Syrian refugee crisis has been going on for years. America has only been bombing ISIS for about a year, but it's spent a disproportionate amount on destruction while sidelining humanitarian efforts.

There's also the fact many refugees are also coming from Iraq and Afghanistan, two countries the US has been highly active in post-9/11.

The US helped create this global refugee crisis, and it has an obligation to help address it.

It's not just an ethical matter, it's a practical one. Helping refugees makes the world safer and must be a part of our larger strategy to defeat ISIS.

Ignoring the refugee crisis will not make it go away, but it will make the world less safe.

Citations: Passport linked to terrorist complicates Syrian refugee crisis (CNN), At least five of the Paris attack suspects were French nationals (Quartz), Remarks by President Obama to the United Nations General Assembly (White House), How ISIS Recruits Around The World Islamic State In Iraq And Syria Pays For Fighters UN Experts Say (IB Times), US to give 419 million in aid to Syria refugees (AP), Strikes in Iraq And Syria (DOD), Where Do Our Federal Tax Dollars Go (Center on Budget and Policy Priorities), Guess How Much Of Uncle Sams Money Goes To Foreign Aid (NPR), What you need to know about the Syria crisis (Mercy Corps)