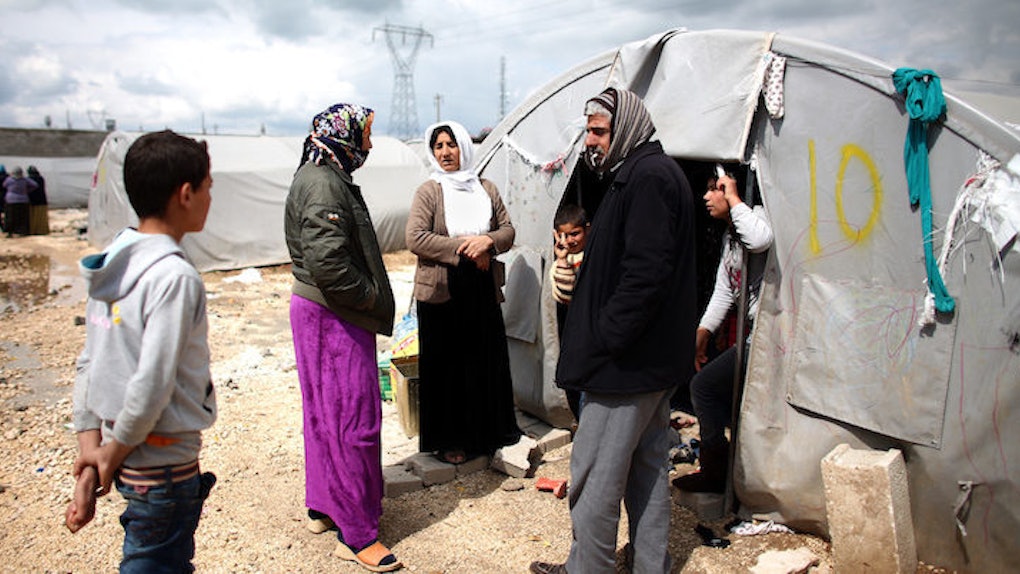 Refusing Refugees Because Of Terrorist Attacks Is Really F*cking Wrong

As of Monday afternoon, more than a dozen United States governors are refusing to take in Syrian refugees following the terrorist attacks in Paris.*

One of the terrorists in Paris was found with Syrian documentation that showed a man who had been accepted in Greece and moved through Europe -- though it's unclear how real the documentation is.

Governor Robert Bentley of Alabama was one of the first to say he wants to reject Syrian refugees, explaining:

As your Governor, I will not stand complicit to a policy that places the citizens of Alabama in harm’s way.

When I saw Bentley’s statement, I nearly screamed because, to be blunt, his decision is really f*cking wrong.

It’s the same logic that led Donald Trump to say he’ll build a wall on the US-Mexican border to keep out criminals and rapists.

Now imagine if Mexico were in the midst of a deadly, multi-sided civil war disrupting daily life from border to border.

Syrian refugees are fleeing from the same fear of terrorism that is causing these governors to keep them out.

Syrian refugees are seeking safety. To deny them that because you think they’re going to bring terrorism with them is to deny humans the opportunity to live.

This is the exact reaction we should not be having. If anything, Western nations should develop empathy for the refugees from the Paris attacks -- this attack on daily life is why they left.

Not to mention, it’s not like the US was letting in so many refugees in the first place.

In September, Obama announced America would allow at least 10,000 Syrian refugees in 2016.

In contrast, Lebanon, with a population of about four million, has already let in more than one million refugees.

Moreover, ISIS can use this reaction to further its cause. ISIS grows under the belief Western nations are deeply against Islam -- so flat-out rejecting Islamic Syrians just helps make that argument stronger.

Shadi Hamid, a senior fellow at the Brookings Institution, told the Huffington Post:

Anti-Muslim and anti-refugee sentiment really play into ISIS' hands. The more that happens, the more French Muslims feel alienated and are susceptible to extremist recruitment.

Conflating the blame of terrorism with refugees also puts those who already got to Europe and America -- from Syria and other countries -- at risk.

The attacks scared refugees in Paris.

One refugee in Paris said in the video:

I heard from lots of people that it’s the work of Muslim people -- also the refugees. We have no money, we have no shelters. How can we do these actions?

Refugees from Syria and other countries need help. It’s inhumane to think otherwise.

*Editor's note, 3 pm: This article has been updated to reflect the growing number of governors saying they reject Syrian refugees.