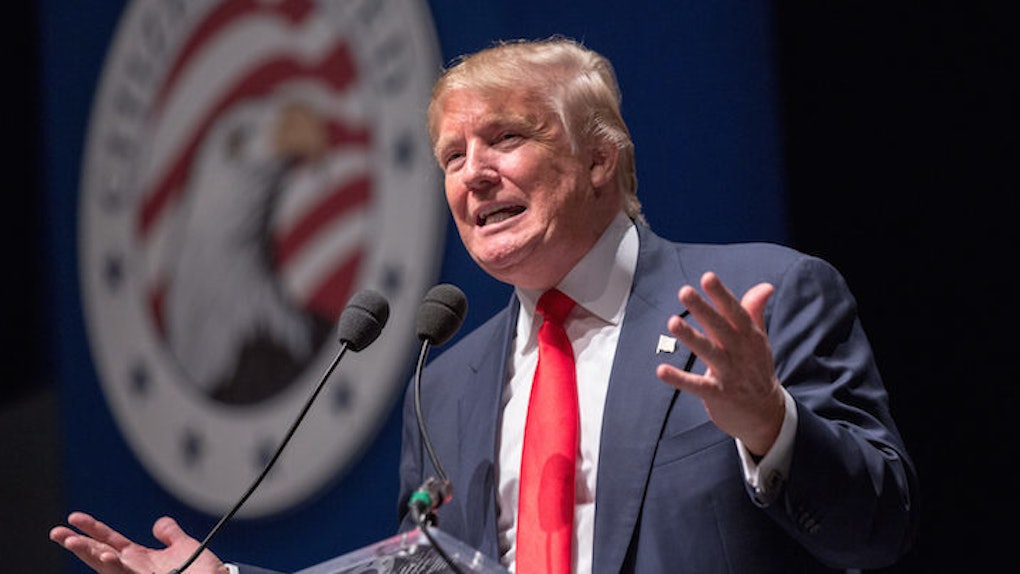 Donald Trump Says If He Becomes President, He'll Force Out All Refugees

There's a plaque in the pedestal of the Statue of Liberty engraved with words from Emma Lazarus' sonnet "The New Colossus." It reads,

Give me your tired, your poor, Your huddled masses yearning to breathe free, The wretched refuse of your teeming shore. Send these, the homeless, tempest-tossed, to me: I lift my lamp beside the golden door!

Lazarus, a New Yorker of Portuguese Sephardic Jewish descent, was inspired to write the sonnet by both her heritage and her experiences working with refugees on Wards Island.

Her words pay homage to the immigrant tradition of the United States and present this country as a place of refuge for people who need to make new starts. "The New Colossus" is synonymous with the notion America is "the land of opportunity," a notion also encapsulated by the Statue of Liberty.

The Statue of Liberty remains a powerful symbol today. But one person, an infamous resident of the city the statue resides by, doesn't seem to appreciate the welcoming sentiments the statue embodies. His name is Donald Trump, and he's running for president of the United States.

On Wednesday, at an event in New Hampshire, Trump proclaimed he would kick Syrian refugees out of the US if elected president, NBC News reports. He said,

With these remarks, Trump continues an unfounded myth surrounding refugees.

As John Oliver recently highlighted, the fear of Muslim refugees being terrorists is driven by an Islamophobic and xenophobic mindset. In other words, assertions like those Trump just made are fallacious and not based off any substantial evidence.

There are more forcibly displaced people across the globe right now (approximately 60 million) than at any point in recorded history. This includes around 19.5 million refugees, four million of whom come from Syria.

These people are fleeing war, extreme poverty and persecution, desperately searching for places they can live in peace. Trump and people with similar beliefs, however, perpetuate misleading stereotypes that will only worsen this crisis.

This is an issue for the entire world to address -- or we will all face the consequences.