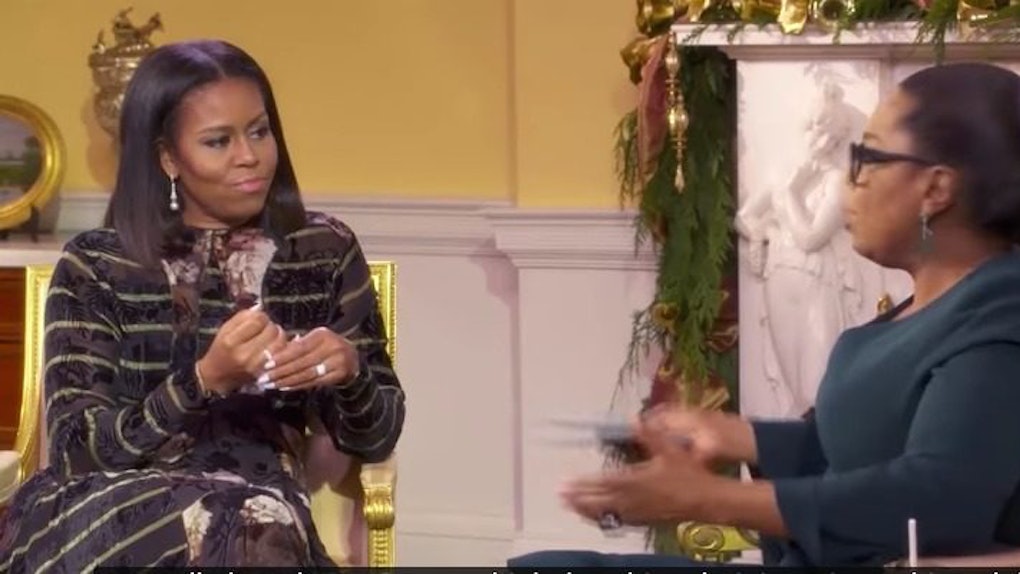 Michelle Obama opened up to Oprah about the White House transition in an interview.

Oprah asked Obama about her infamous meeting with incoming First Lady Melania Trump. Obama discussed how she and Barack are helping Melania and Donald Trump with the move into the presidency (if not necessarily into the White House).

Obama said she and the president are maintaining the helpful good manners that are essential for a peaceful presidential transition.

Oprah asked if Michelle had given Melania any advice. Obama said,

We talked about the kids, but my offer to Melania was you really don't know what you don't know till you're here. So the door is open, as I've told her -- and as Laura Bush told me, and as other First Ladies told me.

As they have said repeatedly, Obama told Oprah they are just showing the Trumps the kindness that George W. and Laura Bush showed them when they were making the transition themselves.

Obama made a reference to her famous motto, "When they go low, we go high."

I'm not new in this going high thing. I'm modeling what was done for me by the Bushes. Laura Bush was nothing but gracious and helpful, and her team was right there for my team, all throughout this entire eight-year process.

This conversation occurred as part of Obama's interview with Oprah.

This is set to be Obama's final interview as First Lady. Of course, it's only fitting it happens with Oprah. The interview is going to air on Monday night on CBS and again on OWN, Oprah's channel, on December 21.

Other clips from the Oprah interview show Obama is leaving the White House with the same message of "hope" that catapulted her family there in the first place.

Between these two inspiring and successful women, I'm sure the rest of the interview will have some incredible and memorable gems.