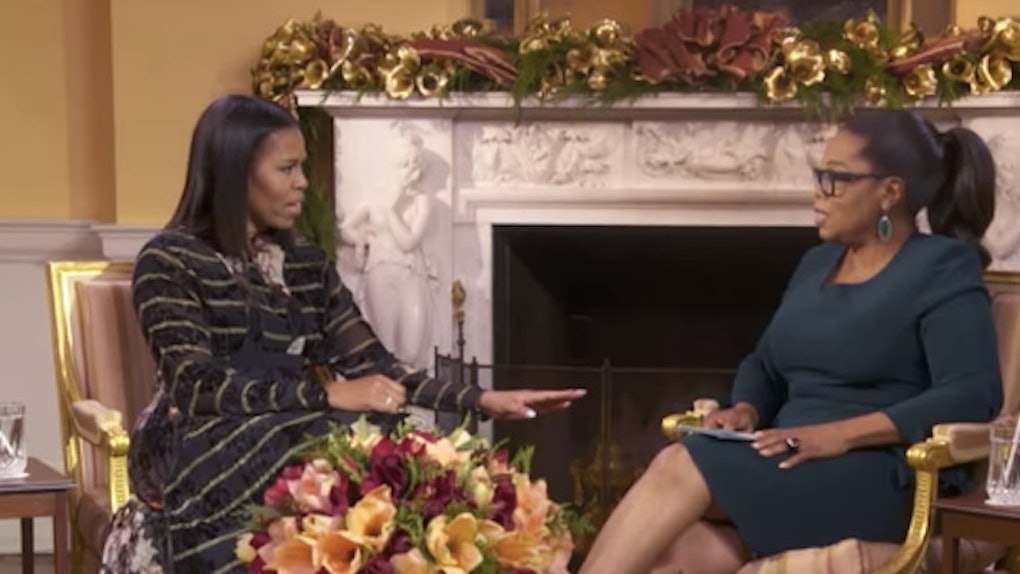 Michelle Obama's Interview On Hope Is Election Talk We Need

Donald Trump winning the electoral college vote left a lot of Americans not only fearful, but lacking what Michelle Obama says is necessary -- hope.

The First Lady of the United States sat down with Oprah Winfrey and spoke candidly about the election. She said,

We feel the difference now. See, now, we are feeling what not having hope feels like. Hope is necessary. It's a necessary concept and Barack didn't just talk about hope because he thought it was just a nice slogan to get votes.

He and I and so many believe that -- what else do you have if you don't have hope? What do you give your kids if you can't give them hope?

President Obama's campaign has always been one of hope, and building a stronger, better America. His most iconic poster featured the word "Hope" and his campaign slogan was "Yes we can."

Trump built a campaign based on fear and hate, including bullying his rivals with nicknames, pledging to temporarily ban Muslims, promising to build a border wall and speaking about deporting millions of immigrants.

I feel Barack has been that for the nation in ways that people will come to appreciate. Having a grown-up in the White House who can say to you in times of crisis and turmoil, 'Hey, it's going to be okay. Let's remember the good things that we have.'

According to a Pew Research Center national survey, one in three Americans think Trump will be a "poor or terrible" president.

Obama's interview with Oprah Winfrey will air on CBS on Monday at 8 pm ET, and then on OWN on December 21 at 9 pm ET. It's FLOTUS's final interview in the White House.

Citations: Michelle Obama: 'We are feeling what not having hope feels like' (CNN)